My 13 Hours with Rahul Gandhi: How the Congress President left an unforgettable impression

In an unscheduled night stay in my hometown, Sangamner, Maharashtra, Rahul Gandhi demonstrated great simplicity and deep family values. He left me struck at the modesty of a powerful man.

As the Maharashtra Youth Congress president, I got an opportunity to campaign for the party across the state — but the night of April 26 left me humble, grounded and more enthused than ever before. My icon and inspiration, Congress president Rahul Gandhi, a monumental personality, who carries an aura of a simplistic nature and a down-to-earth attitude, demonstrated these qualities through his unscheduled night stay in my home town, Sangamner, in Ahmednagar district.

It was a pleasant surprise, mixed with anxiety, eagerness and a bit of nervousness. I was in Malegaon campaigning for Congress candidate Kunal Patil. I got to know that the scheduled meeting of Rahulji in Sinnar was shifted to Sangamner due to security reasons. I got a confirmation from his office that he would come to Sangamner on April 26 at 5.30 pm.

I was delighted but on Friday morning, I received a call from Rahulji's personal assistant, informing us that due to a technical snag in his aircraft, his entire schedule was delayed.

Although we were over 3 hours late due to a snag with the aircraft, I managed to attend all the rallies scheduled for today in Bihar, Odisha & Maharashtra. Our last meeting for today in Sangamner, wrapped up a little while ago. I’m sharing a few pictures from the rally. pic.twitter.com/ViOrhDYaBZ

I was a bit worried as to whether he could reach Sangamner before 10 pm — when the campaign ends.

Almost 50,000 people from in and around from Sangamner had gathered, waiting in excitement for a glimpse of Rahulji. It was an amazing scene.

The clock was moving fast. But the audience was patient, calm and quiet. They only wanted to listen to Rahulji.

Finally, he reached the meeting venue at around 9.30 pm. The audience greeted him with a warm welcome. He too did not disappoint them in his 30-minute speech, full of energy — it was mesmerising.

Not missing a word: The audience which had waited patiently listening to Rahul Gandhi in Sangamner. (Photo: Twitter/ @RahulGandhi)

The real test came after the meeting was over though. Rahulji's personal assistant asked me, “Since it is very late, Rahulji will be staying at Sangamner. Could that be arranged?”

It was a moment of happiness as well as nervousness.

I replied, “We have very simple arrangements. Will Rahulji stay in such conditions? Or we can arrange Rahulji’s stay in Nashik or Shirdi.”

I was taken aback by his reply. “I do not mind any kind of ordinary arrangement. Nothing fancy — a clean bed and a mosquito-free room shall be adequate and is all I can ask for.”

I was astonished by his humility and never expected in my lifetime to meet someone so privileged (owing to his family and background) showing such simplicity. It is known that Rahulji can have the most candid conversations with workers and connect to them effortlessly on a different level which features his modesty — but this was something I had never witnessed before.

We made arrangements for his stay at a guest house as the security authorities did not want any risk. We sat for a chat over dinner. Then came another surprise.

Rahulji desired to have nothing more than a simple decent Maharashtrian meal — Pithla Bhakri. 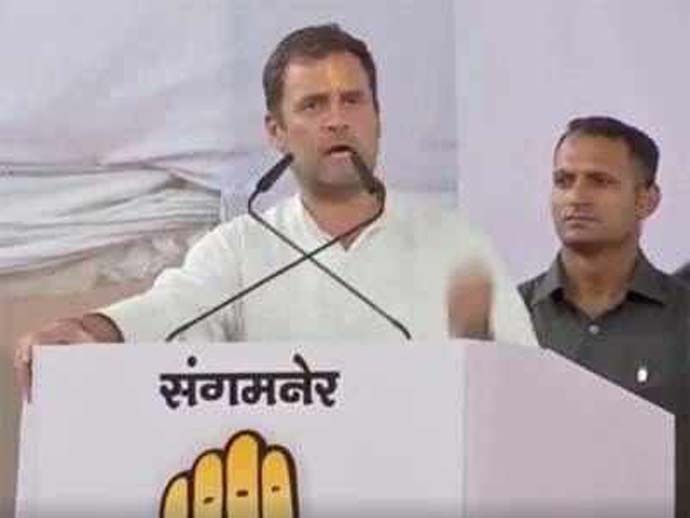 As his stay was not scheduled, the bag that carried his clothes were left in the plane. To my surprise, he told me not to worry about his clothes and that he would wear the same, washed and ironed in the morning. We bought shorts and a T-shirt for nightwear. We took Rahulji to the guest house at our Engineering College, where he freshened up and retired for the day after dinner.

At sunrise, Rahulji took a review of the election-related activities across the country. He made some phone calls to prominent leaders of the country, gathering information of places without showing a hint of fatigue of the previous day's tiresome travelling.

As he was about to leave for Nashik, I told him that my wife and our daughter wanted to have a photograph with him. He agreed immediately and had a wonderful conversation with my little one, who drew a picture for him.

Coincidentally, it happened to be my wife's birthday and the photograph was to be a gift to her — on hearing this, Rahulji instructed his personal assistant to get flowers for my wife and wished her the best.

He also had a conversation with the support staff of the guest house and clicked pictures with them. I was touched by his kind gestures.

Rahulji also spoke with several other members of our family, including my mother. We showed him photographs when late Indiraji had visited Sangamner in 1959, which he received with respect and love. Thereafter, Rahulji left for Nashik.

In my brief political career, I have come across many well-known politicians and renowned businessmen. However, I have never seen or known such humility in anyone.

Coming from a powerful background in politics, Rahulji must have certainly witnessed power play at its peak. But he remains impervious to power with his altruistic personality.

Those 13 hours which we spent with Rahulji were a spellbinding experience — a historic event for all of us.

It is a meeting we will all treasure.

Post your comment
#Maharashtra, #Rahul Gandhi, #Maharashtra congress, #Rahul gandhi rally in sangamner
The views and opinions expressed in this article are those of the authors and do not necessarily reflect the official policy or position of DailyO.in or the India Today Group. The writers are solely responsible for any claims arising out of the contents of this article.

The writer is the president of Maharashtra Youth Congress