From his muscular approach to Pakistan to a weak opposition narrative, there are undeniable pushes aiding Modi back to power.

The battle has well and truly begun, the Election Commission has sounded the bugle for elections 2019. Elections are both a marathon and a steeplechase with many crazy jumps and hurdles along the way, so making predictions at the start of the arduous race is hazardous. And yet, let me place 10 reasons why I believe Narendra Modi is the clear front runner as of now.

1.). If modern-day elections are about money, 'machine' and media, team Modi has a huge advantage  — never before in the history of Indian elections has the media narrative been so one-sided, the war chest available to the ruling party so massive and the party machine to connect with voters across platforms so finely tuned.

Where the BJP has the look of a glitzy, well-oiled Ferrari, the Congress resembles a second-hand, ancien regime Ambassador (the joke in political circles is the Congress is a 'poor' party with wealthy leaders!). Not surprisingly, the BJP has already outspent its rivals several times over and will continue to enjoy a huge resource edge in an extended campaign.

2.). Mr Modi remains India's neta number one by some distance. On the campaign trail, a pugnacious Modi has demonstrated indefatigable energy, sharp communication skills and the ability to punch above his party's weight. The 'Modi hai to mumkin hai' is a tag line that has made the BJP and the government indistinguishable from the charismatic individual at the top: a constant stereophonic sound of applause is amplified by the vast army of cheerleaders keeping the hype machine intact.

This is a bit like the Bachchan movies of the late '70s where even the occasional bad script did not stop the film from getting a bumper opening: in a personality-driven political firmament, Mr Modi's larger-than-life presence continues to give the BJP a crucial boost. He has already done more poll-related rallies and events than all his principal rivals put together. Yes, there could be creeping disenchantment with the populist rhetoric and incessant event marketing at times that doesn’t always match the ground realities but little sign of voter anger: the Modi balloon hasn’t burst as yet — not even the terribly ill-conceived and ruinous DeMo has grounded NaMo: the carefully constructed image of the hard-working 'karma yogi' with the political will and daring to take risks is relatively intact, Balakote being seen as the latest example of his decisive leadership. 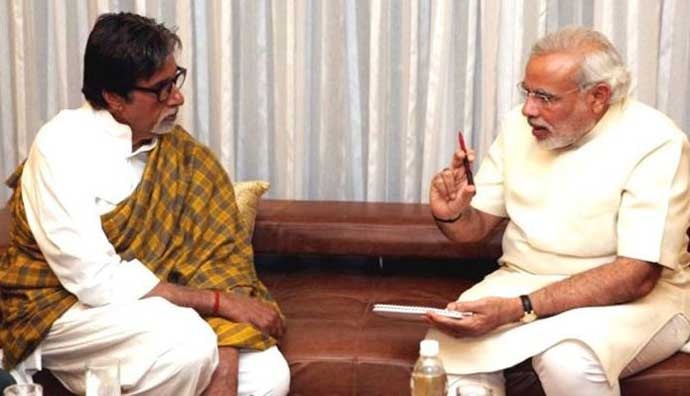 3.). Amit Shah's election 'engineering': In 2014, Amit Shah was in charge of UP, a state he delivered to the BJP with spectacular results. In 2019, he is, as party president, in charge of the BJP across the country. There is no 'one formula fits all' model that works in Indian politics — the BJP under Shah suffered big defeats in Bihar and Delhi in 2015. But a resourceful and ruthless Shah personifies a 'saam, daam, dand, bhed', 'ends matter more than means' political philosophy: notice how smaller parties like Shivpal Yadav's breakaway group in UP are being propped up to split the opposition vote or a pesky Shiv Sena has been accommodated despite the public warring. Moreover, with a committed Sangh Parivar cadre base and a well-entrenched booth worker set-up, the BJP organisation has a last mile connectivity advantage with its potential voters.

4.). The state of the Congress: In the three months since its victories in the Assembly elections in three important Hindi heartland states, the Congress has been unable to build on the momentum. While the Modi government has moved quickly to overcome its weaknesses and announced sops to farmers, upper castes and medium, small and micro enterprise units, it's been business-as-usual in the Congress: familiar stories of factionalism, intrigue and tardy decision making have prevented the Grand Old Party from seizing the opportunity.

Maybe the Assembly victories bred complacency or the verdict was misread as an anti-Modi mandate. In states like Maharashtra for example, which is key to a deeper Congress revival, there are few signs that the party has truly got its act together. Truth is, a patient called Indian National Congress has crept out of ICU but is still in need of urgent rehab. It's in the direct BJP vs Congress state battles where the former still could edge it.

5.). Rahul Gandhi's leadership: Rahul Gandhi remains an enigma wrapped in a mystery. The 2017 Gujarat fight and the 2018 December Assembly wins earned him new respect as a combative campaigner. But he still hasn't shown the organisational or man management skills, or the sharp political instincts to be seen as a natural contender for power, or indeed, a magnet for the entire opposition. Why, for example, he hasn't made a greater attempt to reach out to a Mayawati or Mamata at a personal level is mystifying or why he hasn't sought to project a Team Rahul brand of dynamic younger leaders around him. His Rafale-centric campaign is a double-edged sword, removing the fear of Modi as an ‘indestructible chowkidar’ in the eyes of the Congress rank and file while detracting from core issues like agrarian distress and job losses where the Modi government seems more vulnerable.

6.). The 'mahagathbandhan' conundrum: The opposition has still not been able to hit upon a common minimum agenda or a cohesive platform that goes beyond anti-Modisim or identify a collective leadership that can challenge the 'Modi versus who' narrative. By not implementing its original plan of fighting 543 'localised' elections as a common front, the opposition now has risked a divided vote, especially in crucial states like UP.

That even in the seven seats of Delhi, the AAP and Congress could not come to an agreement mirrors the opposition predicament of internal contradictions and past animosities leading to bitter turf wars. The Congress in particular needs to decide now — is this election about its own revival or about minimising the BJP numbers across India? Regional bosses too, like Mayawati for example, need to take a firm call on which side they stand, rather than keep all options open for post-poll alignments.

7.). The BJP's psephological advantage: Yes, the BJP maxed out in north and western India in 2014, winning almost 90 per cent of the seats across this part of the country. That kind of strike rate is unlikely to be replicated but the BJP could still end up at least 75-100 seats ahead of its closest rivals. Don't forget that the BJP won 42 Lok Sabha seats in 2014 by more than 3 lakh votes, 75 seats by more than 2 Lakhs and 38 by more than 1.5 lakhs. Net-net: it will require a huge swing away from the BJP for it to be prevented from emerging the single largest party. Once the BJP crosses a threshold of 200 seats, they should be able to craft an NDA 3 arrangement.

8.). The key state of Uttar Pradesh is still for the BJP to lose: The announcement of the BSP-SP alliance was greeted with much enthusiasm by the opposition as was the arrival of Priyanka Gandhi Vadra into 'formal' politics. But the bua-bhatija alliance still lacks the on-ground chemistry to match the arithmetic (will, for example, Yadav voters readily switch to the BSP candidates?) and Priyanka's rather tentative entry has failed to shake the political box office. The arrival of Priyanka generated hype. What about solid votes? (Photo: Reuters)

The BJP, by contrast, has invested a large share of its political capital in UP, hoping to ride on the prime minister's appeal and his claim to have implemented direct benefit, pro-poor 'welfarist' programmes that cut across the traditional caste divides. If the BJP retains even half of the 73 seats it won in UP in 2014, it is difficult to look beyond a Modi sarkar returning to power (as of now, UP and Rajasthan are the only two states where the BJP is looking at near-certain double-digit losses).

The road to Delhi in 2019 will almost certainly lead through Lucknow: this is the do-or-die battle of this election which only one side seems fully prepared for at the moment.

9.). Pulwama, Pakistan, Balakote Air strikes: From Jai Shri Ram to Bharat Mata ki jai, from Babar ki aulad to Pakistani jihadiis, from saffron-robed sadhu-sants to the men in military fatigues, the Modi government is banking on a shifting post-Pulwama and Balakot agenda that puts national security at the centre of the political narrative. This brand of aggressive politics, with a not so subliminal anti-minority dog-whistle messaging, may have limited impact in remote rural areas and the BJP-phobic non-Hindutva states of southern India, but it can make a key difference in urban pockets and the crucial Hindi heartland .

10.). The new young ‘Hindutva’ voter: The Election Commission says there are 8.4 crore first-time voters — which is just less than 10 per cent of the total electorate. There is an entire generation of millennial voters whose collective memory is not shaped by the Babri Masjid demolition or the 2002 Gujarat riots.

It is this younger demographic that seems most swayed by Mr Modi’s ‘new’ India, ‘mazboot sarkar’s macho how is the josh’ pitch. The strident tough-on-terror, ‘let’s settle Kashmir once and for all’ talk appeals to this younger demographic. Not to forget the BJP’s core Hindu right middle-class constituency for whom the spectre of conflict with an Islamist ‘rogue nation’ Pakistan offers an emotional connect with militant Hindutva revivalism. Unless the opposition can now re-ignite a more focussed debate on the ‘kisan-naujawan’ economy, the Modi juggernaut, pushing ahead on the steroid of muscular nationalism, has clearly set the 2019 agenda.

Post Script: As a caveat, I must refer to the build-up to the 2004 elections. Then, as now, there appeared no one but Atalji as the likely prime minister. His re-election was even a greater certainty than Mr Modi's appears today. And yet, he lost when the two southern states of TN and Andhra went against his allies, and UP, inexplicably, failed to reflect any 'shining India' pro-incumbent sentiment.

Waves aren't built in and around the capital's echo chambers and instant studio analysis is often rejected in the heat and dust of the hinterland. Which is why, watch this space — after all, in India, voter behaviour is a bit like the weather in London, ever-changing!

Also Read: Why chemistry of the Modi cult will be hard to take on for the Opposition in 2019

#Rahul Gandhi, #BJP, #Lok Sabha election 2019, #Narendra Modi
The views and opinions expressed in this article are those of the authors and do not necessarily reflect the official policy or position of DailyO.in or the India Today Group. The writers are solely responsible for any claims arising out of the contents of this article.