NYAY I.: It's good economics and in keeping with new global thinking on growth and inequality

Economists' ideas on growth are changing, with the IMF finding trickle-down economics doesn't work. Schemes that improve income of the poor, like Congress' NYAY, are thus a good step.

(This is the first of a two-part series).

Warren Buffett surely knows a thing or two about how the economic system works at ground-level. After all, he owes his success to it and continues to be one of the wealthiest people in the world with a net worth of USD 82.7 billion as on April 1, 2019 (Rs 5,73,938 crore at the exchange rate of Rs 69.4 per dollar).

In an article in Time magazine on January 4, 2018, Buffett wrote, “Between the first computation in 1982 and today, the wealth of the 400 (wealthiest Americans) increased 29-fold — from USD 93 billion to USD 2.7 trillion – while many millions of hardworking citizens remained stuck on an economic treadmill. During this period, the tsunami of wealth didn’t trickle down. It surged upward.”

There cannot be a stronger rebuttal to the ‘trickle down’ economics that underlines at least a part of the criticism of the Congress’s poll promise — ‘Nyuntam Aay Yojana’ (NYAY) or minimum income guarantee (MIG) — which proposes a cash transfer of Rs 6,000 a month (or Rs 72,000 a year) to the bottom 20% of the poor. It is often described as a ‘dole’, bad for fiscal health and worse — bad for the beneficiaries themselves because this would apparently make them lazy and dependent.

Wealth doesn't trickle down — it trickles up

Trickle-down economics is premised on the saying that ‘a rising tide lifts all boats’ — that is, economic growth benefits all, including the poor, and hence, calls for policy makers to focus on improving macroeconomic drivers of growth, not redistributive mechanisms like the Congress’s proposed NYAY or the BJP-led government’s PM-KISAN scheme.

But there is a growing consensus in the world that trickle-down economics has little economic logic.

In fact, a 2015 study of the International Monetary Fund (IMF) concluded that contrary to the trickle-down economics' premise, “the benefits do not trickle down”. It said an increase in the income of the rich actually drags down GDP growth, while that of the poor drives higher GDP growth; therefore, emphasise on the need to raise the income of the poor and the middle class for better growth.

An earlier IMF research paper, published in 2014, which looked into cross-country data, said “lower net inequality is robustly correlated with faster and more durable growth,” meaning that equality-enhancing interventions — anything that reduces inequality in income — could actually help growth.

In the US, the logic of trickle-down economics has been used by President Nixon, Ford, Reagan and lately, Donald Trump, to push tax cuts for the rich and industries — the logic being lower taxes lifts all boats together.

After Trump’s attempt, a research paper published in December 2017 by the Wharton School says this concept has again emerged as “the great hobgoblin of our time”. It quotes its Professor of Business Economics and Public Policy Benjamin Lockwood as saying, "The term ‘trickle-down economics’ doesn’t really represent a cohesive economic theory. It’s a term used, often negatively, to characterize the view that reducing taxes on the rich will benefit the non-rich."

This research paper has an interesting paragraph about the origin of the trickle-down concept which goes something like this:

“The term’s popularization is often traced to a 1932 syndicated column by Will Rogers in which the humorist referred to money “appropriated for the top in the hopes that it would trickle down to the needy. Mr Hoover was an engineer. He knew that water trickles down. Put it uphill and let it go and it will reach the driest little spot. But he didn’t know that money trickled up. Give it to the people at the bottom and the people at the top will have it before night, anyhow”.”

The International Monetary Fund (IMF) — the very proponent of neo-liberal economic policy — which primarily advocates: (a) opening up domestic markets to foreign competition, (b) privatisation and limits on fiscal deficit and debt, is no longer so sure this works anymore.

In June 2016, its three top economists created a worldwide sensation by claiming in an article provocatively titled Neoliberalism: Oversold? that instead of delivering growth, some neoliberal policies have actually increased inequality, jeopardising long term growth.

They looked at two neo-liberal policies, the second of which is relevant to the debate on NYAY: 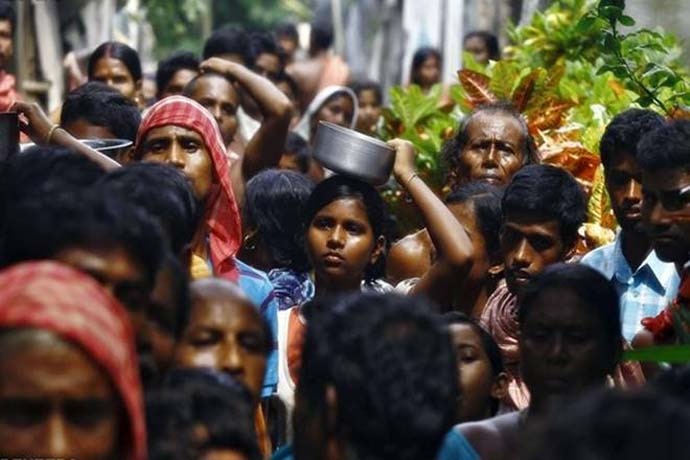 NYAY is described by its detractors as bad for fiscal health — but how true is that really? (Representational image: Reuters)

* Costs of increased inequality are high

* Increased inequality hurt the level and sustainability of growth — even if growth is the sole or main purpose of the neo-liberal agenda, advocates of that agenda still need to pay attention to the "distributional effects".

In view of such findings, the article suggested a more nuanced approach to fiscal consolidation, instead of a one-size-fits-all one.

It cited cases of how the IMF had already changed its approach — it quoted its former chief economist Olivier Blanchard saying in 2010, "What is needed in many advanced economies is a credible medium-term fiscal consolidation, not a fiscal noose today” — its managing director Christine Lagarde supporting the US Congress (in 2013) in raising the country’s debt ceiling to avoid contraction of the economy and other such examples.

India’s policymakers need to take these changes in global thinking into consideration while framing their policies to fight poverty and inequality.

#Narendra Modi, #IMF, #Warren buffet, #Rahul Gandhi
The views and opinions expressed in this article are those of the authors and do not necessarily reflect the official policy or position of DailyO.in or the India Today Group. The writers are solely responsible for any claims arising out of the contents of this article.