Succession battle in DMK: Does Alagiri's challenge pose a serious threat to Stalin?

Only an electoral victory can silence Stalin's critics.

On August 8, as the Sun set on the Anna memorial, MK Stalin and MK Alagiri stood shoulder to shoulder as they saw their father and DMK president M Karunanidhi being laid to rest. 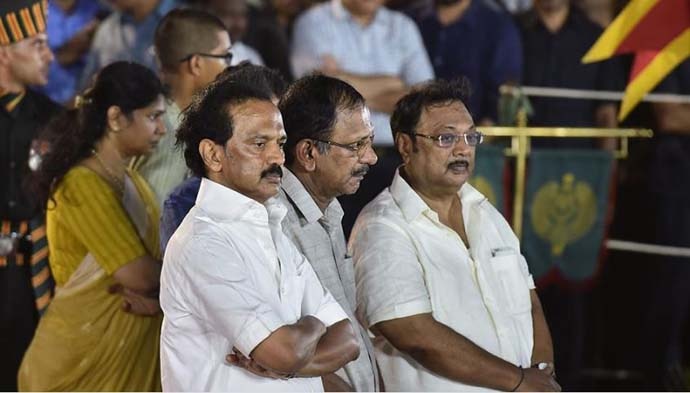 United in grief: The warring brothers were seen together during Karunanidhi's last rites (Photo: PTI)

It was a picture of rare family unity. A week later, MK Alagiri raised a banner of protest at the very same spot, saying his father’s true loyalists were with him.

Flanked by his family, Alagiri challenged the DMK working president and his younger brother MK Stalin.

He said, “I have come here to express my anguish to my father. You will know what the anguish is in coming days. The real loyalists of Kalaignar Karunanidhi are with me. The loyalists across the state are supporting me. Time will provide an answer.”

The former Madurai strongman took a jibe at Stalin’s leadership saying the present leaders will ruin the DMK and the party stares at a bleak prospect, similar to the humiliating defeat in the RK Nagar by-polls in 2017.

With his direct attack, Alagiri has fuelled the succession battle within the DMK even as the rank and file of the party is firmly behind MK Stalin, the political heir-apparent of Karunanidhi. Karunanidhi expelled Alagiri in 2014 for his anti-party activities.

That Alagiri chose the most opportune time to challenge his younger brother is not lost on the cadre of the party. The executive committee of the DMK met on Tuesday to condole the death of the DMK patriarch. Alagiri’s outburst had set the agenda of the convention before — to deliberate restructuring of the party in the post-Karunanidhi era, including elevation of MK Stalin.

Alagiri’s clout in the party has reduced considerably since he was expelled from the DMK in 2014 by Karunanidhi himself for his persistent slanderous attacks on party seniors and alleged anti-party activities. He has a limited influence in a few pockets in South Tamil Nadu and most of his supporters have shifted loyalties.

The demise of Karunanidhi gave rise to speculations of a possible rapprochement between the brothers. Reports from the family indicate that Alagiri has demanded a place for his son Dayanidhi Alagiri in the cash-rich DMK and Murasoli Trust.

However, senior leaders in the know of the affairs said that a homecoming for Alagiri is clearly ruled out. The priority is to prepare the party for the Lok Sabha polls by capitalising on the anti-AIADMK sentiment in Tamil Nadu, riding on the momentum of sympathy following Karunanidhi’s demise.

Political analysts point out that Stalin does not have the luxury of antagonising his brother. The DMK needs to stay united in its fight against its opponents – a field that is marked by new entrants such as Rajinikanth, Kamal Haasan and TTV Dhinakaran.

Narayan Lakshman, senior deputy editor, The Hindu, concurs that in Karunanidhi’s absence there is a potential opportunity to make political gains. However, the opportunities are undefined and will be realised only if and when the DMK faces the people.

The bigger task for Stalin is to win the crucial by-polls in Thiruparankundrum and Thiruvarur, necessitated by demise of AIADMK MLA AK Bose and DMK MLA Karunanidhi respectively. The defeat in the polls will be a sign of danger for Stalin and set off factionalism within the party. Only an electoral victory can silence his critics and brother, MK Alagiri.

Senior journalist TS Sudhir opines that by sounding the bugle of succession, Alagiri has only done more harm than good for himself and the party.

“The DMK is aware that Karunanidhi did not anoint Alagiri as his political successor so despite the noises in the media that the man from Madurai may make, he will not get much traction within the party. Alagiri wants to embarrass Stalin and let the cadre know he is an alternative despite not being in the party.”

Post your comment
#Alagiri, #MK Stalin, #Karunanidhi, #DMK
The views and opinions expressed in this article are those of the authors and do not necessarily reflect the official policy or position of DailyO.in or the India Today Group. The writers are solely responsible for any claims arising out of the contents of this article.