Infighting in state units, disgruntled allies and disappointed voters may make things difficult for the BJP in the forthcoming Lok Sabha elections.

With a little more than a year to go for the 2019 Lok Sabha elections, parties are already going full throttle with poll campaign. Launching a bike rally from Jind in Haryana on February 15, BJP president Amit Shah kick-started the battle for 2019. Prime Minister Narendra Modi too pressed the gas pedal and tried to woo young voters when he interacted with schoolchildren in New Delhi on February 16.

But the big question is whether Modi's magic will work again and the party will be able to retain the same kind of popularity.

Going by the ongoing political scenario, the road to 2019 doesn't appear to be as smooth for the BJP. In 2014, out of the 248 seats in six major states, the NDA managed to get 224. But this time around, it may not be a cakewalk for them.

In the Assembly elections held last year in the home state of PM Modi and BJP president Amit Shah, the party got a major scare from the Congress even though it managed to retain power. Out of the 182-member Assembly, BJP won only 99 seats, facing a loss of 17 seats as compared to 2012. However, in the 2014 Lok Sabha elections, the BJP had won all the 26 parliamentary seats in Gujarat.

Quite clearly, the 2014 Modi wave seems to have waned in Gujarat, especially among farmers and young rural voters. The party tried to win back their support by reaching out to farmers, rural workers and women with a number of populist schemes. Whether this will reap poll harvest for the party will be known only in 2019.

The results of the recent by-polls held in Rajasthan shows that BJP is not in a strong position. The party suffered defeat in all three seats - two parliamentary and one legislative assembly. The BJP's problem is getting compounded with infightings within the state unit. Disgruntled members have been demanding a change in the state BJP leadership. And this isn't good news for the party, especially ahead of the forthcoming Assembly elections.

In the 2014 Lok Sabha elections, the BJP won all 25 seats in Rajasthan. However, with increasing rebellion against Vasundhara Raje and the waning Modi wave, 2019 seems unlikely to be a cakewalk for the BJP, not to mention the fact that the Congress has already started making inroads. 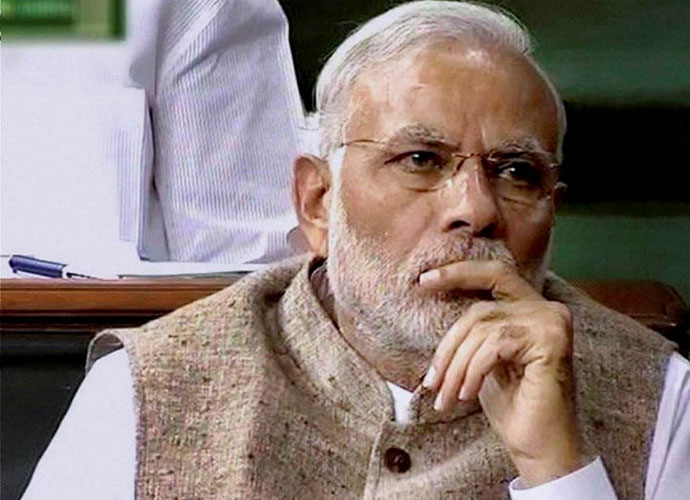 In the country's most-populous state, the saffron wave swept the state a year ago. The BJP ended its 15-year exile and stormed to power with a massive mandate in the Assembly elections and installed Yogi Adityanath as the Uttar Pradesh chief minister.

But here too, the public sentiment seems to be changing, especially as the party is being increasingly seen as anti-Dalit and anti-Muslim. The BJP, along with ally Apna Dal, had bagged 73 of the 80 Lok Sabha seats in 2014 and polled nearly 43 per cent of votes. In the parliamentary elections to be held next year, the performance of the Yogi government, the Ram Mandir (Ayodhya) issue and non-BJP-non-Congress political alliances will play crucial roles. The by-elections to be held next month in Phulpur and Gorakhpur parliamentary constituencies will in all likelihood give a sense of the people's mood. The BJP had won both of these seats in 2014.

RJD stalwart Lalu Prasad Yadav’s imprisonment can lead to new political equations in the state. It can't be ruled out that leaders like Ram Vilas Paswan - who is also known as political weather scientist - Union minister Upendra Kushwaha and former chief minister Jitan Ram Manjhi may part ways with NDA. If that were to happen, it will land the BJP in a piquant situation. To add to that, ever since Nitish Kumar left the mahagathbandhan and joined the NDA, many JD(U) leaders are miffed with him. This can lead to some disgruntled JDU leaders switching over to the RJD. In the 2014 elections, the BJP and allies had won 31 out of 40 seats in Bihar.

The state will also go to Assembly elections at the end of this year. The Shivraj Singh Chouhan-led BJP government is facing anti-incumbency in considerable measure and it will be one of the dominant factors in the forthcoming elections.

Poll observers are confident that the road for BJP will not be as smooth as it was in 2014. The BJP got 27 out of 29 seats in the 2014 Lok Sabha elections. However, the fact that the Congress in Madhya Pradesh is a divided house with three factions could prove to be a golden opportunity for the BJP.

Following the break-up,  the political landscape that has emerged doesn't look too bright for the BJP. Moreover, if Sharad Pawar's NCP joins hands with the Congress, it might add to the BJP problems. Apart from this, the Devendra Fadnavis government's performance too will hold the key. The Fadnavis government has also been accused of hurting the sentiments of the Maratha community and this issue will definitely factor in during the Lok Sabha elections.

Post your comment
#NDA, #BJP, #Modi, #Lok Sabha 2019
The views and opinions expressed in this article are those of the authors and do not necessarily reflect the official policy or position of DailyO.in or the India Today Group. The writers are solely responsible for any claims arising out of the contents of this article.