In Julius Caesar, William Shakespeare introduces two characters — Marcus Brutus and Mark Antony — to underline the difference between the intellectuals and commoners.

Shakespeare writes about how Brutus goes on to earn public respect and recognition but lacks an understanding of the pulse of the masses, while Antony demonstrates his control over people through his speech because of an understanding of their sentiments. It is difficult to find both Brutus and Antony in any individual. 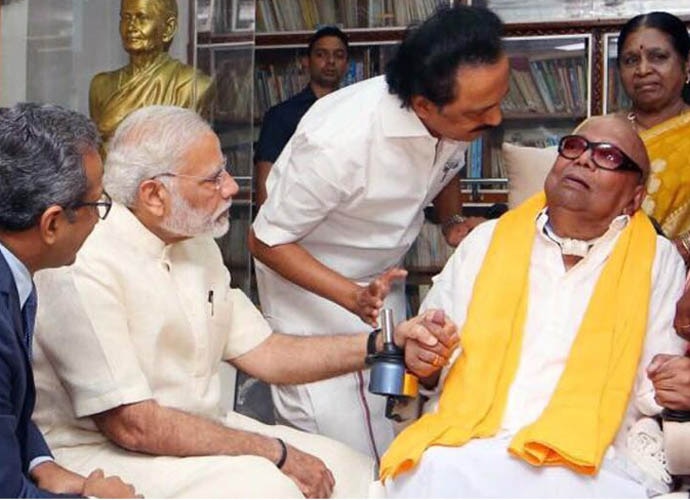 But M Karunanidhi, also known as Kalaignar is different. A man, who has the knowledge of the pulse of the masses, and a man who is considered one of the greatest intellectual of this era - an orator, novel writer, lyric writer, script and dialogue writer, and politician. Karunanidhi has had several feathers in his cap.

Kalaignar started his political journey when he was 14 years old and has had a long stint in the Dravida Munnetra Kazhagam (DMK) and is one of the only leaders to have served as a party chief for 50 years.

Karunanidhi shared political space with veterans such as Periyar EV Ramasamy, CN Annadurai, MG Ramachandran and Jayalalithaa and this shaped him as an intellectual and politician.

At 94, Karunanidhi is still seen as a leader relevant to contemporary politics. He is perceived as a leader concerned about his party and cadre, and at the same time one who belongs to everyone in the DMK.

"He is, without a doubt, the most senior statesman in the state's political arena. Yet, he has always treated young people like me in the party with affection and concern. That's what makes him acceptable across generations of Tamils. There is a feeling of kinship within the party that is hard to explain. It is an amazing achievement for any organisation, especially one that is as large as the DMK. It is one of the reasons why DMK continues to survive as a cadre-based unit," said DMK spokesperson Manuraj Sundaram.

"He is a great politician with smart calculation skills. Despite being a regional party, he gave a sense to the entire country that DMK is the strongest party in the country," said BJP spokesperson Narayanan Thirupathy.

The nonagenarian ensured the Centre took his party seriously and realised its importance.

"M Karunanidhi is always spoken of as a politician who could do business with any other politician, which is why he could be part of the NDA and the UPA in quick succession. Karunanidhi spent a considerable number of his political years competing with MGR and then with Jayalalithaa and that dictated how his politics would be. If MGR was the welfare agenda man, bordering on populism, much of Karunanidhi's politics focused on creating infrastructure," said political analyst TS Sudhir.

Karunanidhi's focus on creating infrastructure led to him sharing a cordial relationship with businessmen and entrepreneurs in the state. "He is undoubtedly one of the sharpest brains you will come across. He was one of the most industrial friendly chief ministers, a very accessible person with whom you could share details in a transparent way and get a solution," said Ramachandran Ganapati, president elect Southern India Chamber of Commerce. Kalaignar used his wit, charm and passion to make an impact in politics, cinema and theatre.

He was one of the first to use cinema as a medium for propaganda. "His quick wit, never say die spirit and sense of humour even in crisis situations besides his great oratory and literary erudition will live long," added political analyst Sumanth C Raman.

Karunanidhi has been away from active politics since 2016 post his tracheotomy surgery and his absence has cost the DMK dearly.

There has been a vacuum in Tamil Nadu politics post Jayalalithaa's demise and Karunanidhi's worsening health.

"Having someone like Kalaignar at the helm for so long has helped the DMK stay close to its original ideals and founding principles. His close associations with Periyar and Anna ensured that the party continues to be ideologically uncompromised," added Manuraj.

The political vacuum in Tamil Nadu is finding many takers with the BJP being a major player followed by newbie politicians like Rajinikanth and Kamal Haasan.

With demand change rising in Tamil Nadu post Jayalalithaa, Karunanidhi's ailment just add to the uncertainty in the state.

Also read: Hafiz Saeed and family defeated in Pakistan polls: This is people’s fatwa against him