A fighter forever: How M Karunanidhi turned into a protester politician

There was a saying which Kalaignar M Karunanidhi would often repeat which loosely translated to: "For some, life is a struggle; for me, to struggle is my life."

His political journey began when he was a 14-year-old leading a protest march, screaming slogans against the Hindi imposition policy of C Rajagopalachari in 1938. During the last few days, when his health declined, the state witnessed the 94-year-old leader again battle, this time against all medical odds.

In his autobiography Nenjukku Neethi, Kalaignar recollects his earliest struggles. When his father took him to high school in Thiruvarur, the young boy is refused admission, presumably on the basis of his caste. The 12-year-old Kalaignar decided to protest against the injustice meted out to him and announced that he would "jump into a lake in front of everyone" if he is not allowed to study at that school. Kasturi Iyengar, the principal, relented and admitted the young boy. 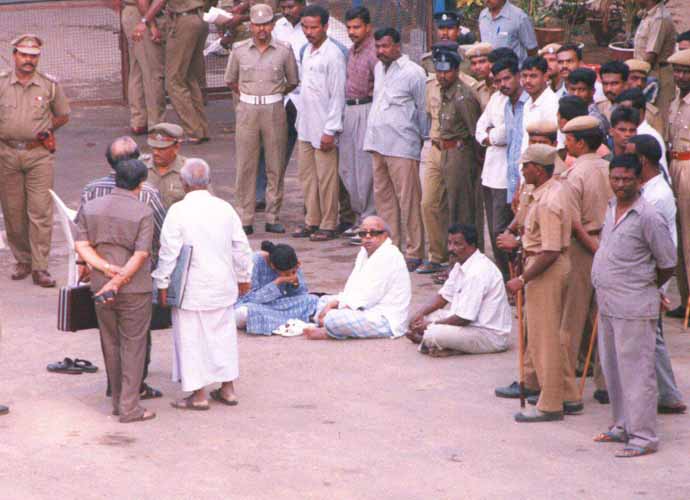 One of the most defining protests announced by the Dravida Munnetra Kazhagam (DMK), under the leadership of 'Anna' CN Annadurai, was to remove Hindi or north Indian names from towns and reinstate their original Tamil names. On the chosen date, June 15, 1953, Kalaignar was to lead the protest at Dalmiapuram.

The DMK cadres, upon reaching the railway station, started painting 'Kallakudi' on the boards. Unexpectedly, around that time, a train arrived at the station. Seizing the moment, Kalaignar escalated the protest by lying down in front of the train, and soon others followed. He faced three months in jail for the act — but ultimately it was this protest which helped the fledgling party gain wide recognition.

When the DMK was in government, the protests did not take a backseat. The agitations continued unabated against the excesses of the Centre.

In 1975, Kalaignar, then Chief Minister, was the only one to criticise Indira Gandhi's declaration of Emergency.

On January 30, 1976, a massive rally was held at the Marina Beach to protest the imposition of Emergency. Consequently, the very next day, the state government led by Kalaignar was dismissed and DMK party leaders endured jail terms under the draconian Maintenance of Internal Security Act (MISA). 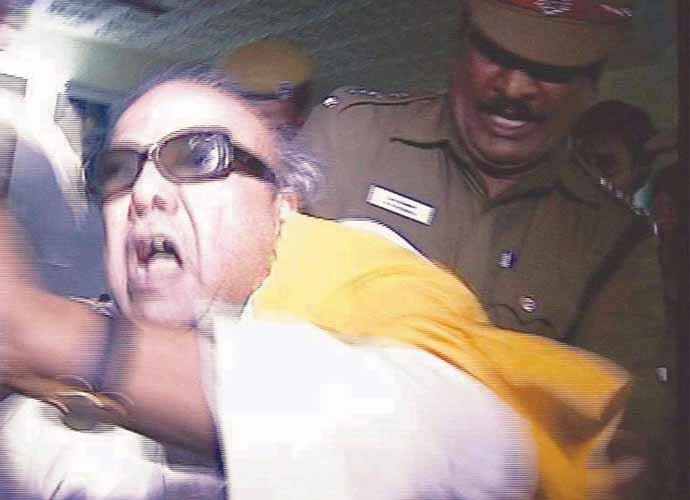 Back in 2001: M Karunanidhi was forcibly taken from his house by Tamil Nadu police, on charges that were never proved. (Photo: India Today)

On June 30, 2001, Kalaignar was forcefully and inhumanely arrested around midnight from his house. The charges against him — which were never proved — were that there was wrongdoing in the construction of flyovers in Chennai. When he was produced before the judge in the morning, the police were reprimanded for their high-handedness and procedural errors in handling the case. Afterwards, the police, instead of taking Kalaignar for medical examination as per procedure, proceeded straight to the jail.

Kalaignar refused to walk into prison.

To protest the pre-dawn ordeal and blatant illegalities, he sat on a dharna outside the jail premises.

Kalaignar is the only Indian politician to have seen 13 election victories — and no defeats. He also led a political party for nearly 50 years. He was chief minister of Tamil Nadu on five occasions, spanning six decades.

There is no doubt, in my mind, that Kalaignar's entire political life stands testament to the heights one can achieve through resistance, struggle and protests. He made many young Tamils, including me, believe in the possibilities of politics.