Maharashtra, Haryana polls to decide if Fadnavis, Khattar can be Modis of the future

India has always been an amalgamation of provinces ruled by regional satraps. From the Marathas of Maharashtra to the Rajputs of Marwar, regional dominance of individual leaders evolved and thrived giving the country its quintessential composite culture.

At the time of British withdrawal in 1947, India comprised 565 kingdoms. Each province commanded a loyal mass base and was governed by hierarchical orders. At the top of this order were rulers whose claim to power was mostly based on inheritance.

These regional entities were dealt with by Sardar Vallabhbhai Patel to join the independent and united republic of India. Today, hundreds of members of the erstwhile royal families are elected or nominated members of Parliament and legislative assemblies, and preside over their respective constituencies as part of our democratic set-up.

Beyond this 'regional kingdoms' (modern day states)-based governance set-up, there is a unique and natural regional influence to our existence as Indians.

Decade after another, we continue to exhibit a special adherence and comfort towards the eclectic mix of local food, language, people, traditions and regional political leaders. The idea of regional existence is so ingrained that only mega events such as India's victory in cricket World Cup or the narrative of finding a national enemy in Pakistan, manage to unite our regional dominions to act as a common nation. Barring such rare opportunities, we are a nation which is a collective of regional identities and leadership.

Issues concerning any one region are likely to have a greater impact on the people of that particular region. When Maratha forces fight a war, regional hero Shivaji Maharaj takes centre-stage and when sugarcane farmers in Uttar Pradesh protest for better support prices, we find another regional leader, Mulayam Singh, assuming significance. The entire country has seen the rise of such cult state-level leaders from Maharana Pratap to J Jayalalithaa from time to time.

Face of the state predicament

The idea of having a charismatic state-level leader is likely to have a more palpable effect on the masses. Not only do the masses feel that the leader is one among them, but are also likely to identify with him as the face of the region.

From the perspective of a national political party, however, having a state-level face can provide the central leadership with its own merits and drawbacks. It provides an extra layer which can be leveraged in more ways than one — act as the local face against other regional players, balance local equations of caste, and play the good cop/bad cop to minimize anti-incumbency.

To exemplify this, Yogi Adityanath, who is the state-level face for the BJP in Uttar Pradesh, can take a more extreme polarising stance quite often, leaving space for the BJP's central leadership to address topics such as development and equality. Yogi Adityanath can take a more extreme polarising stance and the central leadership can talk about development and equality to strike a balance. (Photo: India Today)

But then, the same national political party runs the risk of this state leader developing a backbone strong enough to disagree with the central leadership. This leader can run an independent and parallel set-up, doubling down on magnifying his personal cult.

There are several instances that have exemplified this phenomenon. One such incident took place in 2012 when Narendra Modi as the Gujarat chief minister refused to campaign in state elections for his own party. He was reportedly upset over the appointment of one particular general secretary.

These leaders, including PM Modi, were cultivated and groomed by the central leadership consciously to occupy the regional seats of power. Historically, BJP's track record of cultivating a compelling and exciting second rung has been impressive. The party's access to a cadre-based larger saffron structure, coupled with a central leadership which wasn't as control freak as the Congress, worked in its favour all these years. 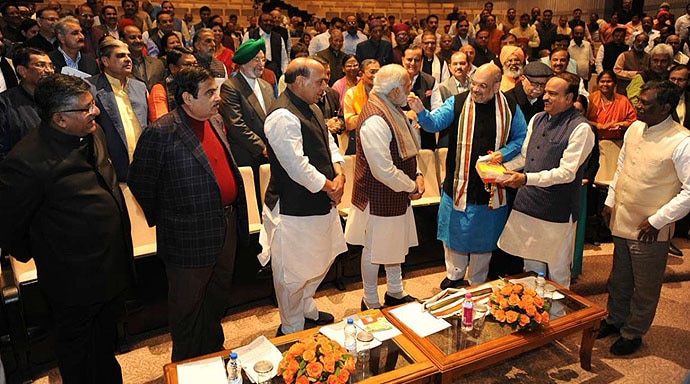 BJP has had a history of cultivating second rung leaders. (Photo: Twitter/@narendramodi)

The Congress, on the other hand, runs a model of high-command governance which usually likes to provide Delhi-dispatched state leaders — all of them possessing the common virtue of having a flexible backbone. Barring a few exceptions, in most cases, these state leaders did not spring up organically from local movements.

This system produced loyal yet less effective leaders such as Motilal Vora and Harish Rawat (and the late ND Tiwari) to name a few, who despite belonging to a state, do not exert influence beyond a handful of seats in elections. This strategy keeps friction low, and management of state-level leadership by the high command easy, but exposes the party organisation to a long-term dearth of sustainable regional warriors, like YS Rajasekhara Reddy and Capt. Amarinder Singh.

In 2019, we are experiencing a new paradigm of electioneering under the Modi-Shah juggernaut. This new BJP pitch is a fine blend of national pride, security, Hindutva and development with a socialistic flavour. It runs an empowered, data-driven campaign with a take no-prisoners attitude.

This election winning mill has successfully changed the conventional set-up of Indian elections. The usual Indian election, which comprises 29-plus mini face-offs, is now a more unified presidential-style face-off. This turbo-charged BJP with a leader who can do nothing wrong (Modi) and a strategist who doesn't seem to know defeat (Shah) has decimated the Opposition overall.

It is strikingly noteworthy that the few states where this winning combination has faced an intense fight are led by formidable leaders. Be it West Bengal (Mamata Banerjee), Punjab (Capt. Amarinder Singh), Bihar (Nitish Kumar) or Telangana (Chandrashekhar Rao). This reinforces and highlights the fact that regions embrace and back 'one of their own' when offered with an option to do so, despite the Modi wave.

The BJP now rules in 19 states and since 2014, the party has appointed 12 first-time chief ministers, apparently chosen by Modi. The first batch of Modi-era BJP chief ministers are now ready to face their first state election in Haryana and Maharashtra as incumbent chief ministers. Manohar Lal Khattar and Devendra Fadnavis seem to have performed well to manage the state-party politics and exercise control over the administration in their states, respectively. 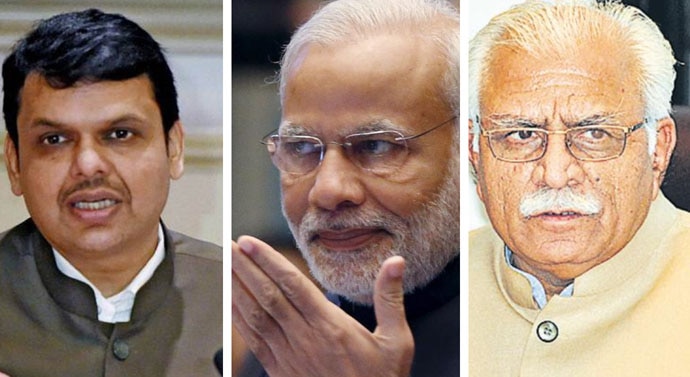 Will the campaign in the October 2019 elections remain focused on Modi or the regional leaders? (Photo: Reuters/India Today)

As they head into the campaign trail, it is time to witness if they pitch to earn the trust of the voter by banking on Modi's charisma or try to foster their own image as the 'leader of the state'.

By all means, the BJP walks into the elections as the favourite. But there is an equally interesting underlying bout to be played here. A contest to walk away with the bragging rights for this victory; a race between the incumbent chief ministers versus the Modi phenomenon.

If the chief ministers of Haryana and Maharashtra succeed in becoming the stars of their own victory, and if the new BJP allows them to do so, the party will continue to build a pipeline of strong mass leaders as chief ministers who can be the Modis of the future.