Indian, Japanese and American naval ships are steaming into the harbour in Guam, the US island in the western Pacific for the annual 10-day Malabar Exercise which began on Thursday (June 7). This year, for the first time, the US Navy is hosting India and Japan off Guam. This is the 22nd year of the India-US exercise, and over time Malabar has grown in scope and complexity. The three navies will take part in surface and anti-submarine exercises search and seize operations, combined strike group attacks and maritime patrol and reconnaissance in the waters near the Philippines Sea.

Japan has been in and out of the Malabar Exercise, mainly because of China’s protests. The earlier UPA government, had often given in to Chinese pressure, for the sake of overall improvement in relations with its Asian neighbour. But in 2015, India put its foot down and a formal announcement was made that Japan would be a permanent invitee to Malabar, making it a trilateral exercise.

China was unhappy, but it has come to accept the trilateral as an unpleasant fact of diplomatic churning in today’s international order. Foreign ministry spokesperson Geng Shuang said in 2017 that China hoped that "such relations and cooperation are not targeted at a third party and are conducive to regional peace and stability". So far, there has been no comment from China on the current exercise. 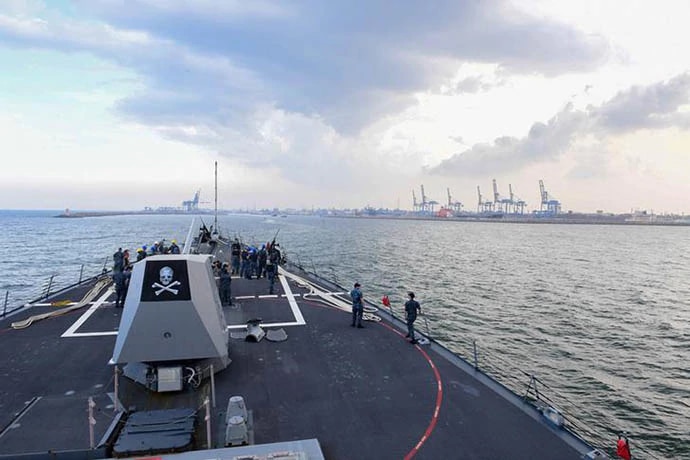 Australia was keen to join the Malabar trio and make it a Quadrilateral grouping. In fact senior officials of the "Quad" — India, the US, Japan and Australia — met in Singapore on Thursday. The idea of a grouping of democratic nations to counter China’s assertive moves in the Pacific, was first mooted by Shinzo Abe during his short-lived term as Japan’s prime minister in 2006. China protested vehemently, seeing it as an attempt to block China’s growth. Abe lost power the next year and neither the US, nor India or Australia wanted to rub China the wrong way.

Australia's Kevin Rudd was not interested, as he saw fantastic trade opportunities with China. The move died down. But the idea remained. Now, it is being revived, but quietly without much fanfare. Thursday’s meeting was just the second gathering of the four nations. The MEA avoided the the word Quad and simply said that officials of four countries met for "consultations on issues of common interest in the Indo-Pacific". India does not want to rock the boat with China just yet.

Flowing from this Delhi shut out Australia from the current Malabar Exercise. Canberra was keen and approached India. Australia believed that joining the Malabar Exercise was a natural progression of the Quad group. The request was made even as India and China were negotiating the informal summit at Wuhan. Prime Minister Narendra Modi and President Xi Jinping’s meet in April was to repair relations after two years of tension including a military stand-off in Doklam. Both Delhi and Beijing felt that it was time to bring back ties on track. Delhi was in no mood to risk muddying the atmosphere ahead of the crucial Wuhan meet. So it was a no, no from India.

Government officials denied that Australia was kept out with an eye to China. "We cannot just allow Australia to come in at the last moment. Australia needs to begin familiarising itself with all three navies," an official who spoke on condition of anonymity said. This is a lame excuse considering that India and Australia hold naval exercises(AUSINDEX) every two years.

As India and China are re calibrating ties, New Delhi’s desire not to spoil the positive spin-off from the Wuhan meet is understandable.

China and India are two of the largest countries in Asia and as Prime Minister Modi said at his Shangrila address, he firmly believed that Asia and the world will have a "better future if India and China work together with trust and confidence, keeping in mind each other’s interests". China appreciated the PM’s positive views on India-China ties. Former prime minister Manmohan Singh always said that managing relations with China was one of the most important challenge of Indian foreign policy.

This is certainly not the time to rock the boat, vis-a-vis China.

Australia and India do not have any major problem, and can be brought in later to join the Malabar Exercise and make it a Quad. But for now it is much more important to get the equation right with China. It would be foolish not to do so, especially as China is economically and militarily way ahead of India. The time can be utilised to modernise and re-equip India’s defence capabilities. Here America is willing to give a helping hand for its own end.

India to balance its growing economic and military strength in the region. Renaming the Asia Pacific as the Indo Pacific is an attempt to bring India out of its Indian Ocean backyard to a larger role in the Pacific. The US wants India, as a major regional power to take responsibility for security of the Indo-Pacific and looks forward when India and US can jointly patrol the Pacific. India is not ready yet to do so. But a time will come when the Indian Navy will play a much more active role in the defence architecture of the Indo-Pacific.