Is Doklam the reason why Australia is kept out of Malabar 2018?

The Quad has a combination that worries China, and there are good reasons for it.

That the Australians will not take part in the Malabar 2018 naval exercises isn’t exactly the stance that was anticipated of the Indian government. In fact, there were enough reasons to expect the opposite, though Australia has participated in the Malabar series of the annual exercises only once. Malabars have been limited mostly to the US and India, to start with, and Japan joining it, thereafter.

There were strong reasons for an Australian participation this year. With the Chinese threat becoming larger, it was expected that the navies of all four constituents of Quadrilateral Strategic Dialogue (Quad) – the US, Japan, Australia and India – will field their ships together for the Malabar 2018 exercise. It would have driven the message to China that the Quad’s coming together in no uncertain terms.

The Quad has a combination that worries China, and there are good reasons for it. If the navies of these four nations were to field a coalesced force, they can quite bottle up China. The fact that the Chinese have created islands in the South China Sea, built facilities in the Indian Ocean and deployed their forces, the combined capabilities of these four countries must be of apprehension to them. However, the Malabar story ran contrary to the expectations and the Indian government chose to let status quo prevail rather than allow the Australians to get on board and raise the Chinese hackles further. The Quad has had a spluttering run so far. It had started as a dialogue mechanism in 2007, with Shinzo Abe giving the push during his first term as the Prime Minister of Japan. It skidded off the rails when the Australian PM, Kevin Rudd, walked out of it. However, the steep growth in Chinese military capability, the gradual shift of global centre of gravity to the east, the need to keep sea lanes and airspace of Indo–Pacific free for use by all, and relentless Chinese belligerence continued to stoke the necessity of the Quad evolving.

The naval exercises between the quad partners have gathered strength gradually. The Malabar series precedes Quad. It had started in 1992 with only Indian and US participation. These ground to a halt in 1998 after the Indian nuclear tests, but restarted with the US looking for partners in its global war against terror after the twin towers were brought down.

In 2007, Australia participated in the naval exercises. But, the participation petered out with Kevin Rudd leading Australia out of the Quad arrangement. The Japanese have been participating for years, and were formally made permanent members in 2015.

The Malabar 2018 exercises are scheduled to be held in June, 2018, off the coast of Guam in western Pacific. USS Ronald Reagan, a Nimitz class super carrier, will participate along with Indian and Japanese naval assets.

A variety of reasons have been ascribed to India shying away from giving Australia an entry into the exercises. The most articulated opinion is India’s recent pursuit to stabilise its relations with China. After the 73-day stand-off at Doklam, Indian doesn’t want to add fuel to the fire.

The Chinese are hugely sensitive about the Quad and had objected to the concept even when it was initially formulated. However, to view Australia being excluded from the Malabar exercise as an Indian comedown may well be oversimplification. It could have been a part of the give-and-take arrangement that the Indian PM and Xi Jinping might have decided at Wuhan recently. But, the decision perhaps was also influenced by American stakes. 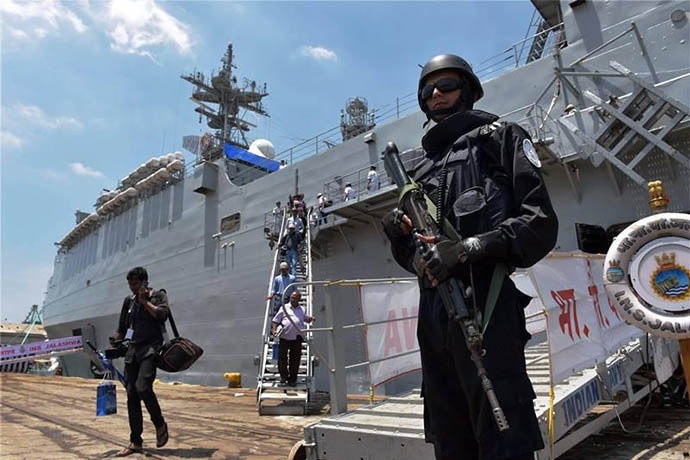 The Americans would not want to up the ante against the Chinese any further, having already fired a huge salvo in their trade war with China. With Australian participation in the Quad, over and above the sanctions, it could have led the Chinese to deduce that this was an all-out attempt to push them right to the wall.

Ahead the 2019 elections, the Indian sensitivity rests in stabilising the borders. Another Doklam interests none. The readiness of both the parties to avoid such a situation is reflected in the Wuhan communiqués, with both parties giving strategic directives to their forces to build trust on border affairs.

As far as the Australians are concerned, they had requested for participation. Over the years, Australia has realised that hitching its future to the other three-Quad constituents is a safer bet than all their bridges with China amount to. The Japanese, in any case, are close American allies and understand the role of India in keeping the Asian continent’s geo-political balance.

Of course, the Quad as a multilateral group retains its relevance in the long term, but pursuing it to the point of an Australian participation in Mallabar 2018 could have reduced the margins for adjustments between the US and China, just as it would have affected India-China relations. Even without Australia, the Malabar with its India, US and Japan components is quite adequate to make waves as far as the Chinese coasts.

#Doklam, #Malabar exercise, #Australia, #Foreign relations
The views and opinions expressed in this article are those of the authors and do not necessarily reflect the official policy or position of DailyO.in or the India Today Group. The writers are solely responsible for any claims arising out of the contents of this article.