In December 2013, the entire national media was in a tizzy over Arvind Kejriwal and his Aam Aadmi image. Every move of the man who would be Delhi chief minister was being seen as trend-setting: he was projected as a 'new age' leader breaking away from the capital's oppressive VVIP culture. I was in Goa on my annual break and invited chief minister Manohar Parrikar for dinner. When he arrived in his trademark bush shirt, trousers and sandals, he had a complaint: "Why are all you tv-wallahs obsessed with this Kejriwal? Only because he is based in Delhi? Some of us also also lead simple lives only we don't make a show of it on TV!" In his many years as MLA and later, chief minister, Parikkar had built a well-deserved reputation as a politician who consciously avoided the trappings of power. When we invited him to a TV event in 2012, he insisted on travelling economy without an entourage of assistants, handled his own baggage at the airport and didn't even take the official car. "It's your private function, why should I use public money?" was his reasoning.

In Goa too, the image of a chief minister who travelled without security and the flashing lal batti motorcade was embossed in the public mind. There is a story, possibly apocryphal, of how he was once on a scooter when a car being driven by a police officer's son banged into him. As the young man got out and flashed his connections, Parikkar just lifted his helmet and smiled: "Yes, I know who you are but I am also your CM!"

When a few years later, Mr Parikkar moved to Delhi as the country's defence minister, he remained true to his 'Aam aadmi' leanings. For months, he stayed in the Navy guest house as a government bungalow had still not been allotted to him. Not that he was complaining. His grouse was different - he had to attend a series of ceremonial functions from Army Day to Republic Day and was having his limited sartorial preferences sorely tested. "You know, I don't like all these formal functions because I really don't like wearing these fancy clothes and shoes!" he insisted.

Which might partly explain why he could never really adjust to Lutyens Delhi.

Parikkar was a man from the west coast, whose life had been shaped by the sights and sounds of Goa's gentle sea breeze, placid waters and warm sun. Goenkars like their fish curry rice, their afternoon siesta and a languid pace of life. It breeds self-contentment and an unhurried approach to life: the cut and thrust of Delhi's power games is unsuited to the Goan way of life. As a true son of the soil, Parikkar was a fish out of water in the capital's political turbulence. The Goan way of life, beautiful and simple, shaped him. (Photo: India Today)

And yet, he never made a fuss.

The prime minister had tasked him with an important job, and like a dyed in the wool disciplined RSS worker, he would abide by the leadership's decision. For Parikkar, the defence ministry posed a challenge and an opportunity - the challenge of cutting through the bureaucratic stranglehold over defence deals and an opportunity of restoring the faith of the armed forces in the state. "I want our jawans to have the best of equipment and facilities," he once told me, "Officers can manage but who will speak up for the jawans?" As defence minister, he worked hard to cut red tape and upgrade facilities for the forces. (Photo: Twitter)

Uncomfortable with a prying national media, Parikkar's responses weren't always politically correct and his tendency to make light of serious national security issues often landed him in trouble. For example, when he likened the army to Hanuman after the 2016 surgical strikes. When I asked him about the comment, he wasn't fazed at all: "You people only want headlines, I want to boost the morale of  the troops." He had stayed awake all night while the operation was on and gone to sleep at 6 am. "At IIT, we were trained to stay up late into the night," he said, with a typically disarming smile.

Parikkar was born in the small town of Mapusa in north Goa, went through the intensive RSS shakha drill, made it to IIT Bombay on pure merit (where Infosys co-founder Nandan Nilekani was a batch-mate), and then set up his own small business. He was a self-made man, and carried the conviction and confidence of a rooted regional leader, whose badge of identity was his hard work and not privilege. He could be firm, even autocratic, in his leadership style -- in Goa, critics would call him 'Chota Modi' at times for making the state BJP a one man show -- but without being rude or offensive. The bureaucracy and ministerial colleagues feared him because he was a hard task-master, but he also knew where to draw the line. "We have to get work done in government with focus but not with confrontation," was his mantra. And work he did get done, then whether it be the long-pending One Rank One Pension demand of the armed forces in Delhi, organising an annual film festival within a matter of months in Goa or kickstarting major infrastructure projects in the state. His 'karma yogi' image ensured that he managed to stay out of controversy — even the contentious Rafale deal did not singe him. Somehow, no one could believe that Mr Parikkar would be involved in an under-hand deal. There were allegations in Goa over his growing proximity to the casino barons and troubling questions over government land deals, but nothing ever stuck to him. "Kuch toh log kahenge," was his curt response to the critics.

Truth is, in Goa's corrupted political landscape, where politics is often just about cutting deals, Manohar Parikkar was a cut above the rest, bringing a much needed stability  to Goa's notorious 'aya ram, gaya ram' culture of the 1990s. He was special for another reason - having cut his teeth in the shakha culture, he didn't become a prisoner of polarising Hindutva politics. The Ram Janmabhoomi movement catapulted the BJP and Parikkar into prominence in Goa - but he was acutely aware that in a state with a large minority Catholic population, he had to build an inclusive polity. "In Manohar's universe, the church and temple will always co-exist in harmony," is how his one-time deputy chief minister Francis D'Souza, who also passed away only last month, once described his success in bridging the Hindu-Catholic political divide.

Ironically, in more recent years, Parikkar ended up antagonising the local Goa RSS unit with his insistence on promoting English and not Konkani as a prime medium of instruction. "A modern society needs English education," was his no-nonsense answer - befitting of the country's first IIT-educated chief minister.

In the last year, as cancer slowed him down, he fought the battle with fortitude, although by the end, it seemed that he was clinging onto power. Maybe, he should have walked away with his dignity intact rather than pushing himself to stay on in office as the head of a rickety coalition , despite the visible deterioration in health. "How is the josh!" he asked the crowd earlier this year when he attended a bridge opening event in Panjim, a reference to the popular film Uri's surgical strike chant. He was clearly unwell, his voice was hurting, there was a tube in his nostrils, and assistants were propping him up. 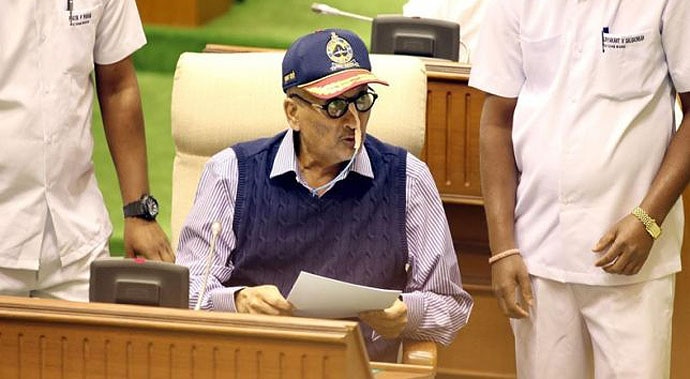 Yet, he hung on, perhaps aware that the BJP-led government would survive only as long as he stayed on as chief minister. A leader who saw himself as an architect of a 'new' Goa was now being reduced to a caricature of the very 'survivor' political culture he claimed to despise.

Which is why I would like to remember Manohar Baab from happier times - as someone who had committed himself to public service and not to power politics. The last time I met him was in July 2018: the monsoon rains were lashing against the window sill and Goa was bathed in verdant green. He looked at me and smiled wistfully, "Goa in the rains is the most beautiful place in the world, isn't it?" Yes, Manohar baab, it truly is. And yes, your heart and mind always was in Goa and with its people. RIP.

Also read: Manohar Parrikar passes away: A patriot, a politician, a professional

#RSS, #Goa assembly, #Goa chief minister, #Manohar Parrikar
The views and opinions expressed in this article are those of the authors and do not necessarily reflect the official policy or position of DailyO.in or the India Today Group. The writers are solely responsible for any claims arising out of the contents of this article.