How Maratha reservation protest has caught Devendra Fadnavis in a trap

In a stark reminder of the Mandal commission agitation, the Maratha reservation protest claimed its first life on Monday. Kakasaheb Shinde, a 28-year-old youth from Aurangabad, jumped into the Godavari river and ended his life. The news spread like wildfire and soon most parts of Maharashtra witnessed sharp, mostly violent reactions.

The sudden protests have put Devendra Fadnavis in a catch-22 situation. Fadnavis recently made it clear that the decision on reservations will be left to the court but the way the fire over Maratha reservation is raging, would give Fadnavis a sense of déjà vu.

Flashback to 2012-13, a young Fadnavis under his mentor and the then pillar of strength for the state BJP unit, late Gopinath Munde, led a frontal attack on the Congress-Nationalist Congress Party (NCP) government demanding reservation for Dhangars under the scheduled caste category.

Dhangars form a strong caste group and constitute about 8-9 per cent of the population. The quota demand for Dhangars, also known as the shepherd community, was part of Munde' s game plan to counter the Maratha-dominated NCP and Congress.

Munde, himself an OBC, was building a formidable caste alliance of OBCs. Even then Munde and Fadnavis knew that reservation for the Dhangars under ST category was far from reality. But it was an opportunity that was too good to resist. 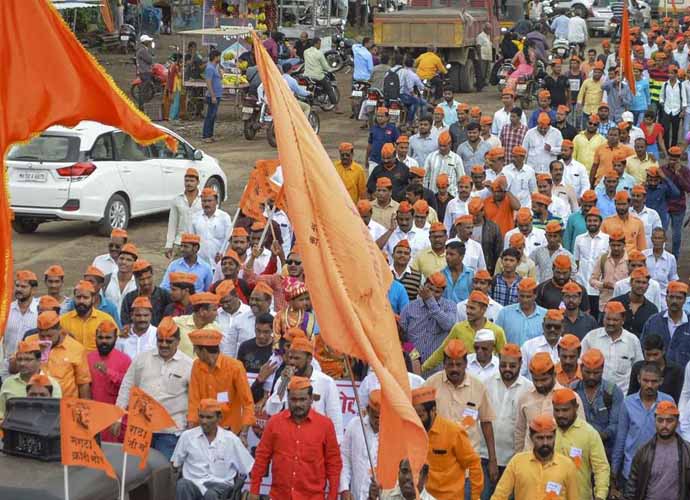 On the one hand, it helped to corner the government and on the other hand, it won them the support of the Dhangars. With Munde not around, Fadnavis alone is getting a taste of his own medicine.

But the reason why Fadnavis's pain could be bigger than that of Congress leader Prithviraj Chavan or NCP leader Ajit Pawar is the fact that he is an upper caste - a Brahmin. Any stand he takes on the Maratha reservation issue is bound to be seen through the prism of his caste.

On July 23, as Maharashtra celebrated Ashadhi Ekadashi, the chief minister skipped the customary pooja of Lord Vitthal in Pandharpur. The chief minister quoted an intelligence report about a probable disruption of the celebrations by the Maratha protesters in Pandharpur where lakhs of devotees had gathered. But the CM's effort to diffuse a problem only backfired when his statement was dubbed as anti-Maratha.

Even if the Maharashtra chief minster manages to rise above his caste antecedents in the future, the number crunching and achieving a social equilibrium is not going to be an easy task for Fadnavis.

The OBCs in Maharashtra get 19 per cent reservations while the scheduled castes get 13 per cent and scheduled tribes get 7 per cent. While the nomadic, denotified tribes, and special backward classes get a reservation of 13 per cent.

Any reservation above this 52 per cent is against the Supreme Court ruling on an upper cap for reservations.

So, Fadnavis will have to take a decision within this framework and that would imply a compromise on the reservation share of these groups. The OBCs are against giving up any share as the OBC segment consists of about 350 castes. The Kunbi-Marathas, a branch of the Maratha community, already gets a share in the OBC reservation.

Fadnavis's predecessor Prithviraj Chavan tried to announce reservation for Maratha community by promulgating an ordinance but that got entangled into a legal battle.

Most importantly, while walking this tightrope, Fadnavis will also have to ensure his upper caste urban voters, who are anti-reservation, are not antagonised.

It won't be an exaggeration to say that Fadnavis is caught in a chakravyuh. It took his government over 26 hours to end the blockade in Gangapur. The agitation has turned violent in several places. Two people, including a policeman, have lost their lives already.

The once silent morchas have rather taken a rather unfortunate violent turn at several places.

With just over a year left for the state elections, there is no doubt that this agitation will soon become an election issue.

If Fadnavis breaks this chakravyuh, he will emerge as one of the shrewdest politicians the state has ever produced, but if he fails the result will not only be disastrous for him but also for the social fabric of the state.