Despite glaring dereliction of duty and alleged 'complicity' with criminals, cops mostly get away with a mild rap on the knuckles.

Bollywood, the collective conscience keeper of Indian society, has played a major role in "stereotyping" the police — inevitably the last one to arrive in a jeep and arrest the villain/s long after the hero bravely, sometimes single-handedly, tackled the bad guy/s.

But despite all that, we still fear crossing certain moral, social boundaries because we know "aunty police bula legi".

The image of the Bollywood cop — notwithstanding the fact that Indian cinema has also shown many honest cops who themselves are frustrated with the system (Zanjeer, 1973, Ardh Satya, 1983, or, more recently, Singham, 2011) — has etched one thing in the public mind: No one is above the police. They are the ultimate "mai-baap". Don't rub cops the wrong way.

Which is why even Prime Minister Narendra Modi in 2014 got so irked by the depiction of the police that he called for a change. Three of the accused held in the Alwar lynching case at the Ramgarh police station. (Photo courtesy: Hindustan Times)

"The film industry has created a very bad image of the police in the minds of the common man and I ask them — why? Yes, there may be some shortcomings, but should only that be highlighted? Is it not our duty to remove these shortcomings by bringing into light the positive and good things," he had asked that time.

Sadly, PM Modi didn't realise that he made a grave error of judgement there. If the PM wanted to change how policemen are portrayed on screen, he should have addressed this question to the police, and not to Bollywood.

Films, after all, are a reflection of society. And there has been no error of judgement in depicting the police system. If anything, it's the police force who still can get away with admitting "poor/wrong decisions". 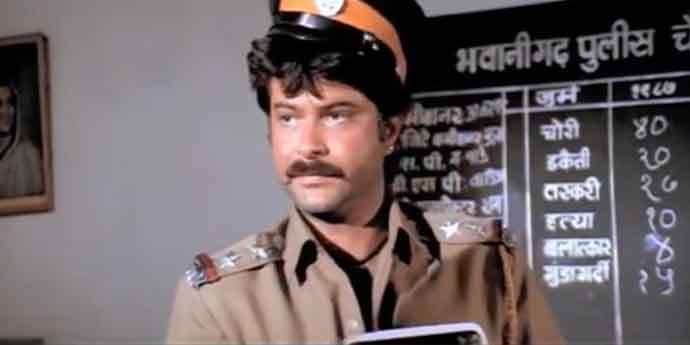 The Bollywood bad cop is a reflection of real-life policing. YouTube screengrab from the movie Ram Lakhan

Amid the shifting narrative around the murder of dairy farmer Rakbar Khan — the latest victim of gau rakshaks in Rajasthan — the Rajasthan Police, while admitting that there was a delay in taking the injured victim to hospital, said it was “error of judgement” on the part of the local cops in assessing the situation.

According to news reports, the police confirmed that cops first took Rakbar’s cows to a gaushala before taking him to hospital, more than three hours after he was attacked by the angry mob.

Two days after he was killed, the government suspended ASI Mohan Singh, in charge of the Ramgarh police station, and sent three constables to police lines.

The police, however, have refuted allegations of “custodial death” levelled against the cops by Naval Kishore Sharma, a "gau rakshak", and said Rakbar’s family members believe that he died because of the thrashing by cow vigilantes.

Many also believe that reports of a delay in taking the victim to hospital have been spread to "complicate the clear fact that local goons under the cover of cow protection killed Rakbar".

This in-depth news report quoted Maulana Hanif, chief imam of Alwar, saying: “The murderers are trying to shift the entire blame for their crime on to the police so they can roam scot-free. However, the reality is that they first attacked him, then called the police. After having seen the investigations in past lynching cases, we are sure that this time too, the murderers would be given a clean chit. When the MLA Gyan Dev Ahuja openly supports the mob, then what sort of justice are we supposed to expect?”

Lost in the police-politician-goon labyrinth, what stands out is — administrative inefficiency, law and disorder, human rights violations. The constant denial of civil, social rights. 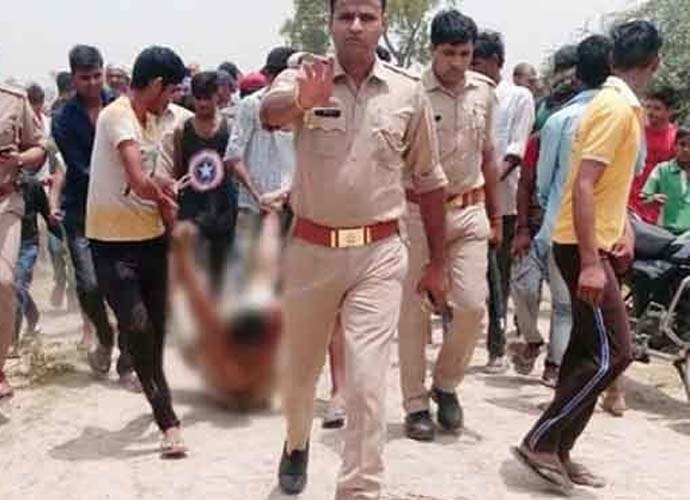 The UP Police too had apologised and sent the cops (in pic) to police lines after they were seen escorting people dragging the body of a man who was lynched by a mob.

While the police admitted its "fault" with a warped "error of judgement", the action to suspend the ASI was taken after a video went viral, purportedly showing him admitting his "mistake". "Mere se galti hogai...kaise bhi maan lo...saja de do ya chhodh do...seedhi si baat hai (I made a mistake...punish me or pardon me...it is simple and straight)," the ASI can be heard purportedly saying in the video.

It is this "Okay-my-fault-I-don't-give-a-damn" attitude of the ASI which exposes why human rights violations seem "simple and straight" to the police, because this is how the system has been working forever.

There is another reason why the erring cops feel it's plain and simple — the absence of adequate punishment and accountability for gross rights violations. Accountability requires adequate appraisal mechanisms, which we clearly don't have and don't feel the need for.

While loads of man and money power is being wasted in the name of police reforms, there is no clear accountability mechanism. Even the Supreme Court seems helpless when it comes to the pathetic state of public administration in the country.

The erring cops, on the other hand, know quite well that no matter how many high-profile inquiry commissions are set up, the policemen will get away with either no punishment or mild raps on the knuckles — mostly a few months' suspension, or the more popular "transfer to police lines" (routine work far from law and order enforcement activities).

That is precisely why the police think its erring officers deserve the same kind of reprimand for all "errors of judgement". Recently, a Delhi Police inspector was transferred to police lines after he was photographed sitting on a chair in his uniform, with a godwoman giving him a head massage.

Letting a man die while the cops decide where to shift the cows confiscated from him is not an error of judgement. It's deliberate dereliction of duty. The dereliction also raises questions over police "support" to murderers and their "complicity" with the lynch mobs.

Although a high-level panel of senior officers has been formed to investigate the matter, the country's past record with such panels, and how seriously their recommendations are taken, don't inspire much confidence.

The quagmire of panels

For the poor in India, Rakbar's story is all too common — a blood-thirsty mob attacking an unarmed man, the police either watching the crime being executed, or taking the victim to hospital where he is declared "brought dead", violent crimes coming to light only after videos go viral, cops taking help from local negotiators to quell rumours and mobs killing the same negotiators while the cops look on. There is worse that can happen — police encounters (a convenient substitute in India for extra-judicial killings), custodial deaths in the name of interrogation, lathi-charges in the name of quelling protests, firing at peaceful protesters.

There is no end to such Kafkaesque police terror. And every time, the answer seems to be 'transfer' of erring police officers, like in the recent Tuticorin incident.

The National Crime Records Bureau's Crime in India data released in November last year (the latest edition of the report pertains to 2016) suggests that the country doesn't not have enough safeguards to protect citizens from rights violations by the police.

The number of FIRs registered against personnel "is few and far between", something which, experts say, also shows unwillingness among the police to file an FIR against, or prosecute one of their own.

Almost every riot in Indian history has been followed up with high-powered commissions set to fix responsibility for the violence. But governments have been known for turning a blind eye to the main body of recommendations and suggestions, including recommendations for reforming the police. The Srikrishna Commission, constituted in the aftermath of the 1992-93 riots in Mumbai, while indicting 31 cops, from the rank of deputy commissioner of police to constable, had this to say on the role of the police: "The evidence before the commission indicates that the police personnel were found actively participating in riots, communal incidents or incidents of looting, arson and so on. The commission strongly recommends that government take strict action against them."

The result: Of the 31 personnel indicted by the Srikrishna Commission, only a handful were charged in the courts but acquitted. In an article for The Hindu back in 2001, the late Asghar Ali Engineer wrote: "This is how the government took 'strict action' against the officers [the Shiv Sena- BJP government promoted 10 of these indicted police officers]. One of them was appointed police commissioner of Mumbai by the Sena-BJP government. The police commissioner has since retired. What action, if any, can the Congress-NCP Government take against the retired officer? Of the indicted police personnel, the government has suspended five constables. It is always easy to take some symbolic action against the lower ranks. But the higher ranks go scot-free or are even rewarded."

This "symbolic" action is true for most cases, irrespective of which party is in power (both at Centre and state).

Post your comment
#Crime and punishment, #Police lines, #Alwar lynching, #Police Brutality
The views and opinions expressed in this article are those of the authors and do not necessarily reflect the official policy or position of DailyO.in or the India Today Group. The writers are solely responsible for any claims arising out of the contents of this article.