No More Tears: Mayawati and Mulayam Singh bury their grudges. The national parties have much to worry about

Despite an extremely bitter and fractious past, Mayawati and Mulayam Singh's rapprochement holds nothing but dread for the Congress and BJP.

In politics, they say, no one is a friend or foe forever. Over the recent years, there has been an expectant air in Indian politics among the secular parties to merge together in what could be called the ‘Mahagathbandhan’ — the expectation was realised on April 19 in Mainpuri when long-time political foes, the Samajwadi Party (SP) patriarch Mulayam Singh Yadav and Bahujan Samaj Party (BSP) supremo Mayawati, came together to address a huge political party.

The audience was dotted in red (in support of the SP) and blue (supporting the BSP) flags, and the chants were alternating between “Mulayam Singh zindabad” and “Mayawati zindabad”. The bonhomie between the rival parties’ leaders was an ice-breaker and was translated to the audience as a “political earthquake”.

Dharamveer Yadav, a 55-year-old farmer from Mainpuri and a supporter of Mulayam’s SP, claimed to have attended every SP rally in Mainpuri since 1994. He opined that the alliance was required to defeat the BJP. When asked about traditional political rivals campaigning for each other, Yadav said, “She is a big leader and so is he. If they are together, it only makes them stronger.” 72-year-old Ram Nath Singh, a BSP supporter, was standing next to him in the rally, and said, “She is our leader. If she asks us to vote for someone, we will. Mulayam is also a good leader who has carried out development in Mainpuri.”

In her speech, Mayawati mentioned the cause of their bitter rivalry — the guest house scandal of 1995.

The incident was on June 2, 1995, when the BSP’s announcement to withdraw from the SP-BSP coalition resulted in chaos at Lucknow’s Meerabai Guest House, leading to the combined anger of SP workers. Reportedly, an unruly mob of SP workers marched into the guest house where Mayawati was in a meeting with her MLAs and her room was vandalised, casteist and sexual slurs were thrown about, and she was allegedly attacked. The BSP MLAs present in the room failed to protect her and she was finally led to safety by BJP MLA Brahm Dutt Dwivedi, who happened to be present. 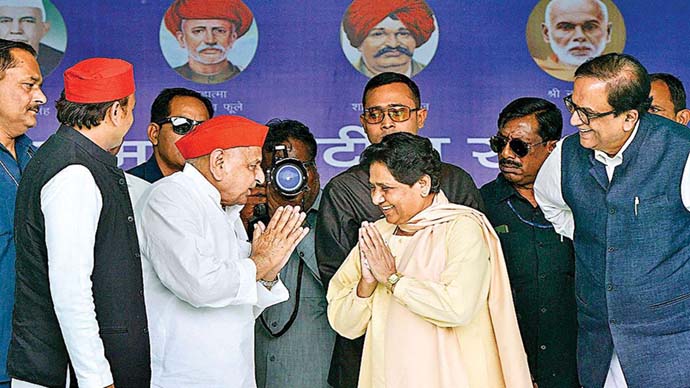 No More Tears: Mulayam and Mayawati greet each other as they share the stage at a recent Mainpuri rally. (Photo: PTI)

In her speech on April 19, Mayawati reportedly said that she had put that incident behind her “for the sake of the country and people.” Making the most of the situation, Mulayam said, “If Behenji has forgotten the incident, then who are we to hold on to the grudge?” The SP patriarch profusely thanked the Dalit leader for seeking votes on his behalf and Mayawati, in turn, called Mulayam a true OBC leader who has done much for the downtrodden — unlike the Prime Minister Narendra Modi, whom she called a “fake backward.”

The supporters on both sides seemed to welcome the bonhomie.

SP chief Akhilesh Yadav, now in total command of the party, played a deft master of ceremonies. After the historic alliance between the SP and BSP on January 12, Mainpuri was viewed as the pièce de résistance — signalling Mulayam’s endorsement of the alliance. Akhilesh’s major success was convincing his father, who was reportedly unwilling to join the rally till the last moment. Though SP sources claimed that Mulayam’s Mainpuri schedule was fixed in advance, ground zero was full of stories of Netaji’s reluctance.

Any possibility of the Mahagathbandhan allying with the Congress now has been lost after Rahul Gandhi’s statement reportedly that “SP and BSP were scared of Central Investigating agencies.” This led to SP chief Akhilesh Yadav apparently alleging Congress to be the most “dhokhebaaz” (deceitful) party. His riposte to Rahul Gandhi apparently was — “Congress misused the CBI. We want to tell those who are saying that we are scared of the ED or the CBI — we do not fear any institution... The BJP and the Congress are two sides of the same coin — each as deceitful as the other.”

The fissures and aggressive statements and the broken promises of the past do not bode well for the national parties.

As we near the end of the third phase of polling, the Mahagathbandhan is emerging as the force majeure in Uttar Pradesh and the national parties look set, in my view, to be ruing their errors in the days to come.

Also read: Why it would be good for India if the mahagathbandhan won the 2019 Lok Sabha polls

Post your comment
#Akhilesh Yadav, #Samajwadi Party, #Bahujan samaj party, #Mulayam Singh Yadav
The views and opinions expressed in this article are those of the authors and do not necessarily reflect the official policy or position of DailyO.in or the India Today Group. The writers are solely responsible for any claims arising out of the contents of this article.