U-turn to Progress: After decades of darkness, Mewat in Haryana's Nuh is moving towards development

The southernmost part of Haryana borders Rajasthan on the one side and Uttar Pradesh on the other. The districts of Mahendragarh, Rewari, Nuh and Palwal make up this area and for long, these have been counted as the industrially backward regions of the state.

Nuh, earlier known as Mewat, was formed in 2005 by taking blocks from Gurugram (earlier Gurgaon) and Faridabad. The district was renamed Nuh in 2016 because Mewat largely makes for a cultural region that spans across Haryana, Rajasthan and Uttar Pradesh.

Mewat — or the land of Meos — is a hilly region that comprises portions of ancient Matsya Desha and Surasena. It is predominantly inhabited by the Meos — sometimes known as Mewatis.

The Meos are Muslims and their history is absolutely unique.

These Meos are reportedly of Hindu origin, people who converted to Islam in order, it is said, to escape religious persecution. There are many theories to explain their ancestry, and many Meos profess Rajput origins — strikingly, they also have gotras similar to the Jats and the Meenas. In medieval times, many Hindus of the region converted to Islam. 'Wali-e-Mewat' was the title used by Khanzada Rajputs who ruled the region independently. This is a part of the larger but geographically scattered history of Islam in Haryana.

It is noteworthy that the Meos accept and profess cultural similarities with Hindus — you will actually come across many Meo Muslims who are named 'Ram' or 'Shankar'. They also celebrate Hindu festivals with pomp. The Mewatis are essentially agriculturists and cattle herders, and in the absence of any industry, the region falls short on key economic parameters.

While the cultural history is indeed intriguing, the Meo story takes a turn here to roll downhill.

A study on the Mewat region was published by the S M Sehgal Foundation a few years ago. It analysed the multi-dimensional aspects of development in the region. The report highlighted the backwardness of the region and how it fell short on almost all developmental parameters. Mewat requires focussed attention on education and health, besides employment opportunities, the report stressed. The agriculturists' struggle in the arid climatic setting and lack of potable water is a big priority.

In 2018, Prime Minister Narendra Modi launched the ‘Transformation of Aspirational Districts’ programme — which focuses on transforming 117 districts across 29 states that have witnessed the least progress along certain development parameters. 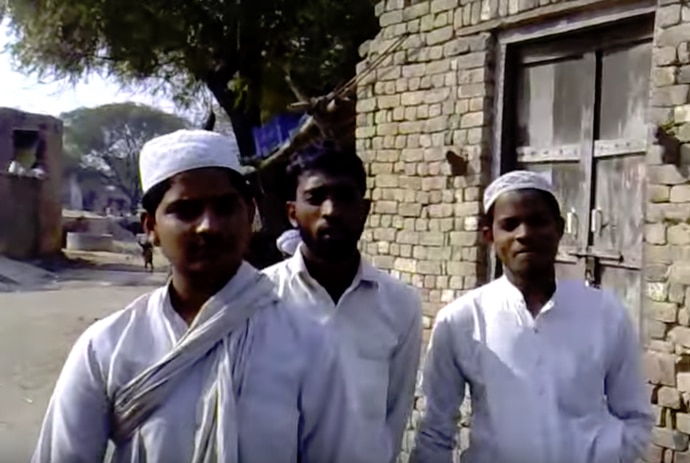 The Meos of Mewat: A unique community, in harmony with their Muslim identity and their Hindu past. (Representational image: YouTube Screengrab)

The focus areas were Health and Nutrition, Education, Agriculture and Water Resources, Financial Inclusion and Skill development, and Basic Infrastructure. The report published by the NITI Aayog said, “The objective of the program is to monitor the real-time progress of aspirational districts based on 49 indicators (81 data-points) from the 5 identified thematic areas.” The dashboard created under the same initiative tracks the development in these districts on a real-time basis. The Delta Ranking reports have been published twice — the first on June 29, 2018, and then on December 26, 2018.

Nuh, Haryana, has shown great progress in the last year which reflects in these reports.

Interestingly, when the Baseline Ranking report was launched in March last year, Mewat ranked the lowest among the 101 districts in the programme — in fact, it was widely known as ‘India’s most backward district’ in media reports.

However, a strong progressive contrast is visible now. In the Financial Inclusion and Skill Development themes of the Delta Rankings of January 2019, Mewat is the best performer and ranks at number six amongst all the Aspirational Districts of India in the field of Education.

On being contacted, officials said that they were proud to share these achievements. In the past few years, the government has specifically focussed on education and women’s issues there. A Book Bank for students from classes IX to XII, bus services to and from schools for all girl students and working women’s hostels are some steps on ground level in the right direction. Upgradation of Primary Health Centres (PHCs) and establishing new PHCs has also made significant impact on the ground.

The Bhartiya Janata Party (BJP) government, led by CM Manohar Lal Khattar, promised overall development of the state. And in Nuh, the government seems to be keeping its word. Officials working in the district stress on the importance of the convergence of schemes and effective administrative leadership behind this change.

Recently, soon after being defeated in the Jind assembly constituency, Congress spokesperson Randeep Surjewala addressed a rally in Mewat. In his speech, he accused the BJP government of meting out step-motherly treatment to Mewat. However, the accusation is in direct contrast with the statistics. Earlier this month, the government launched a ‘Mewat Feeder Canal’ project to augment the supply of drinking water to the district. This, in addition to numerous other projects in the district, is rewriting the story of growth in Mewat.

From 101 in the Baseline Ranking to a composite rank of 9 in the Delta Rankings-January 2019 — to my mind, this is a story of governmental focus and people's efforts that is worth a standing ovation.

Also read: The badlands of Mewat - Why Alwar has been making news for lynchings and cattle smuggling