Mizoram is the only one in the Northeast with a Congress government, and the party is leaving no stone unturned to retain power in the state

On the birth anniversary of Pandit Jawaharlal Nehru, UPA chairperson and the former Congress president Sonia Gandhi launched a scathing attack on the current government for undermining the principles laid by the country's first Prime Minister.

One of the points that Sonia Gandhi highlighted was the secularism as the core pillars of Nehruvianism — that she claimed has been undermined by the Narendra Modi-led government (without naming the present Prime Minister).

While Congress has always been vocal about being secular, does the party really adhere to what they moralise? Rather than turn back the pages of the political history, a look at the present strategy of the Congress party in Mizoram ahead of the Assembly elections will give a clear answer.

On November 28, Mizoram — comprising of 40 assembly seats — will go to poll. The state is the last bastion of the Congress in the north-eastern region. Congress has been in power in the state with Chief Minister Lal Thanhawla at the helm for the past 10 years. Besides facing anti-incumbency, the party is also confronted with an adverse political trend — no party has ever succeeded for a third consecutive term in the state.

These factors have bolstered the hopes of the main opposition — Mizo National Front (MNF) — led by former Chief Minister Zoramthanga, who was the Chief Minister of the state for two terms — from 1998 to 2008.

MNF is targeting the poor infrastructure, unemployment, and — most importantly — lifting of the liquor ban by the Congress government. The lifting of the liquor ban goes against the inclination of the church bodies. Mizoram comprises 87 per cent Christians and the church always has had a say in all matters of the state and the society. MNF has promised to re-impose the prohibition in the state if voted to power.

Adding to its woes, the Congress is also hit by the desertion of its key leaders, who have joined the opposition camps ahead of the elections. In such a situation, Congress is openly playing the religious card to retain its only north-eastern bastion — contradicting what the party’s high-command has been moralising.

The party has sided with the NGOs and the church bodies on the issue of the Reang (Bru) people voting.  The Reangs or Brus are the ethnic minorities in the state, with a majority of the people adhering to Vaishnavite Hinduism and animist beliefs. A small population in the tribe practices Christianity. 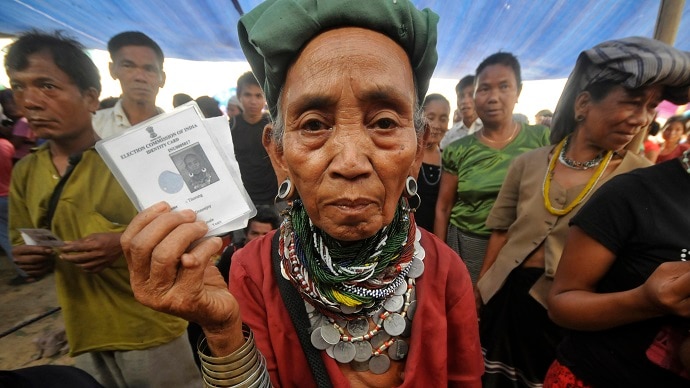 Even as the Bru issue is brewing, Congress is sticking to its pro-Christian cards (Photo: Reuters)

The Brus fled Mizoram in 1997 in the wake of inter-community violence and persecution by a section of Christian Mizos. They have been living as refugees in Tripura, and have voted from the refugee camps in Tripura in the past elections. However, the NGOs — backed by the church bodies — have demanded that the Brus living in Tripura Transit Camps should come and cast their votes inside Mizoram — as every other Mizo do from outside the state at the time of the election. The former Chief Electoral Officer (CEO) of the state — S B Shashank — supported the Brus voting from their transit camps in Tripura. This led to a standoff between the CEO and the government and led to protests in the state. SB Shashank was removed, and the Election Commission appointed a new CEO.

In July this year, an agreement was signed by Government of India, Governments of Mizoram and Tripura and Mizoram Bru Displaced People’s Forum (MBDPF). However, the MBDPF pulled out of the pact within days of signing the agreement stating ‘dissatisfaction’.

Around 32000 Brus live in Tripura as refugees. Of over 5400 Bru families, only 31 returned to Mizoram. Fearing persecution, the rest refused to go.

However, Election Commission - after reaching an agreement with all the parties involved - is arranging for polling stations at the inter-state border village of Kanhmun in Mamit district of Mizoram, where the Brus will be casting their votes. There were around 11000 Bru voters last time and according to some reports, it should be around 15,000 voters this time. The civil societies are against the enrolment of fresh voters in the relief camps, especially without conducting public hearings.

However, Congress seems to be supporting the civil societies only to gain the confidence of the church bodies in the Christian majority state. Not only that, the party — strongly hit by anti-incumbency — is rather focusing on MNF's relation with BJP. The Congress terms MNF's relations with the BJP as anti-Christian.

MNF is a member of North East Democratic Alliance (NEDA) — a coalition of anti-Congress parties led by the BJP. Although the Congress itself had forged an alliance with the BJP in the Chakma Autonomous District Council in April, it had walked out of the coalition in October to focus on the Christian card during the state elections.

Congress even distributed over 50,000 copies of a leaflet published in Mizo with putting on front pictures of the MNF and the BJP leaders — Zoramthanga and Amit Shah — sitting together. Congress has been openly saying that it is the only party which will safeguard the Christian-interests, as they claim that the MNF has a 'secret pact' with the 'anti-Christian' BJP.

It is easily understandable that to retain the only bastion in the region, the Congress is openly playing the majority card by trying all the moves to woo the Church and the Christians. It is an irony that the same Congress party which accuses the BJP of playing the Hindutva card is itself playing Christian card in Mizoram.

One might wonder whether former Congress president Sonia Gandhi is aware of her party's activities in the state where the party has totally undermined the principles of secularism only to get the majority Christians on board to win the state elections.

Also read: What's happening in Mizoram ahead of Assembly elections and why we need to know it

#Bjp-congress-mnf, #Congress, #Bru refugees, #Mizoram assembly elections
The views and opinions expressed in this article are those of the authors and do not necessarily reflect the official policy or position of DailyO.in or the India Today Group. The writers are solely responsible for any claims arising out of the contents of this article.