How Modi's Houston gala will prove to be game changer

The 'Howdy, Modi' rally at Houston was an outstanding success. It was politically fine-tuned exceedingly well by both Indian Prime Minister Narendra Modi and US President Donald Trump.

Handling a Modi-focused Indian community extravaganza organised on American soil, at which the American President was also a participant, was a delicate exercise, even if the Wembley event at which then-British Prime Minister David Cameron was present provided a precedent.

A balance has to be struck in such cases between the degree of attention both political leaders receive, with neither overshadowing the other. The enthusiasm of the public reception accorded to both has to appear comparable. This was all the more important given Trump's narcissism and attention-seeking. Some concern that Trump's unpredictability might cast a shadow on the event proved mistaken.

The event was choreographed very expertly, with Modi lavishing praise on Trump, artfully tracing his career from various milestones in his variegated life and occupations to the Presidency and pumped his sense of self-importance, which was reflected in the face of the beaming US President. In an informal event of this nature such liberal eulogising is possible, but not so in formal, across-the-table exchanges. Modi took full advantage of this public occasion to play to Trump's ego, and rightly so, as the occasion demanded it and Trump's gesture in joining the rally needed to be reciprocated adequately. 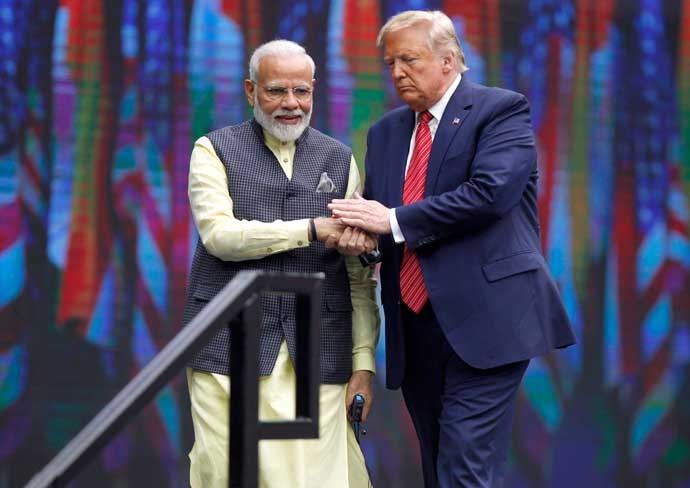 Trump, on his side, avoided any false notes. He stuck to the script. He was generous in his praise of Modi, acknowledged the massive size of his electoral mandate, commented very positively on the contributions of the India-American community to US society and projected himself as a strong friend of India in the White House.

He lauded Modi for lifting 300 million out of poverty, welcomed India's decision to buy more energy from the US, referred to Indian investments in the US (singling out the steel sector where the US has increased tariffs on Indian steel exports) and applauded job creation by Indian companies.

This contrasted with his earlier complaints about India's high tariffs, market restrictions and unfair trade practices. While this would not have been the occasion to voice such complaints again, his positive comments on India's contribution to US economic growth were a refreshing change.

Trump avoided any reference to pending trade issues. Modi tried to ease contention over these issues by remarking light-heartedly that Trump calls him a tough negotiator, which he has learned to be one inspired by the US President's book Trump: The Art of the Deal.

Trump's remark that India and the US were jointly fighting against "radical Islamic terrorism" has significance in the context of continued Pakistani-sponsored terrorism against India. After all, our problem with terrorism is only with Pakistan and no other country, and if we highlight this issue on all forums, it is to expose Pakistan and generate pressure on it.

While Trump's statement does not mean that US ambiguity on dealing with Pakistan's terrorist affiliations to India's satisfaction will end, Pakistan PM Imran Khan's confidence when he meets the US President in New York on the margins of the UN General Assembly to seek his intervention in J&K will be shaken. Modi exploited Trump's remark fully by leading a standing ovation by the audience.

The President's remark on border security, which he said was vital for the US as it is for India, and that the US understands this in our case, could be related to India's efforts to handle the problem of illegal migration, as his own comment was made in the context of his determination to prevent illegal migration into the US. In the light of the critical comments made by the president of the Geneva-based Human Rights Council (HRC) on the National Register of Citizens exercise in Assam this could be helpful, but the US has walked out of the HRC.

Modi's masterstroke at Houston was the manner in which he raised the Article 370 issue. He wanted to demonstrate to Trump how popular this constitutional change in J&K was not only back home, but also among Indian-origin communities abroad. Trump must have been impressed by the standing ovation Modi received from the assembled crowd for his decision.

With Imran Khan launching a no-holds-barred international campaign against the nullification of Article 370, raising the threat of a nuclear showdown, and creating a national hysteria in Pakistan over India's step, this disarming of Trump by Modi at Houston by exposing him to the depth of popular support for his J&K move, must have come as a rude shock to the Pakistani leader who was planning to plead with Trump to pressure India to end the so-called human rights atrocities in Kashmir. Modi's quip "Ab ki baar, Trump sarkar" was by no means an endorsement of Trump's candidature; it was suggesting to him archly a slogan he could use to effect, copying his own. The welcome given to him by the Majority Leader of the House (Democratic) and the presence of Democratic Congressmen at the event would question any such interpretation. In several Indian languages, Modi, as a consummate politician, responded to "Howdy, Modi" by saying "everything is fine" to the cheers of the crowd from all parts of India. Everything was fine at Houston. New York next.

Also read: Howdy, Modi: What the Indian PM can achieve through Houston speech