Mood of the Nation: Thumbs up for PM Modi and Sangh Parivar's Hindutva agenda

India Today Editor-in-Chief talks about the reasons behind Hindutva filling the ideological vacuum and PM Modi's continuing popularity, in the February 1, 2021 edition of the India Today Magazine.

The country has been on a roller-coaster ride since the last India Today-Karvy Insights Mood of the Nation (MOTN) poll five months ago. After see-sawing for a while, Covid-19 infections in the country have plateaued in recent months. The rollout of the vaccines has added to the sense of relief. There have been no more economic lockdowns, and every effort is being made to open the economy. The results are showing. After contracting 23.9 per cent in the first quarter of the financial year, the economy recovered in the second quarter, with the contraction reduced to 7.7 per cent. The overall projection for the year is a 7.5 per cent contraction. Over the past year, what has remained unchanged is the astonishing trajectory of Prime Minister Narendra Modi’s popularity. Even with a slight dip of four percentage points since last August, the prime minister’s current ratings at 74 per cent are still higher than his previous next best, 71 per cent in August 2019. 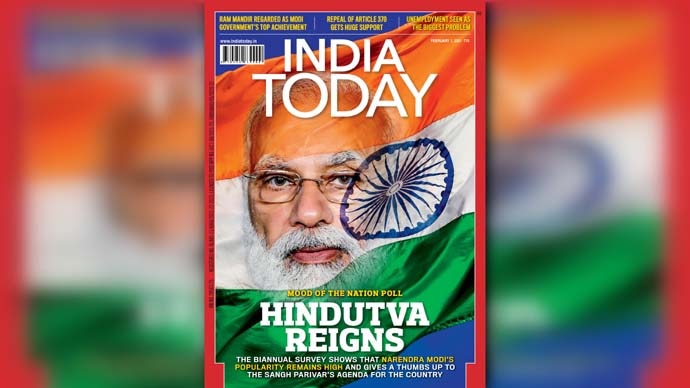 Prime Minister Modi’s continuing popularity can be attributed to his consistent handling of the pandemic since last year, venturing into the uncharted territory of an unprecedented health emergency. Fortunately, the number of people who see Covid-19 as India’s biggest problem has dropped sharply from 70 per cent in August 2020 to just 24 per cent in the current MOTN survey. The multiple crises he is facing have not dented the prime minister’s popularity. In fact, people believe he is the best person to lead them out of adversity, be it an economic downturn, a military challenge or a pandemic. None of these challenges has diminished people’s faith in the prime minister. Seventy-three per cent of the respondents are happy with his handling of the pandemic, 59 per cent believe he has given a befitting reply to the Chinese aggression on the border and 66 per cent approve of how he has managed the economy. If a general election were to be held today, the NDA would return with a comfortable majority of 321 seats as 66 per cent of the respondents are satisfied with this government’s performance.

However, there is another message coming out of the opinion poll—the favourable public sentiment towards the Hindutva ideology of the Sangh Parivar. There is widespread support for the three pillars that embody the Hindutva core of the BJP and which have been on the party’s manifesto since 1991. These are the Ram Mandir, the abrogation of Article 370 and the Uniform Civil Code. The respondents listed the Supreme Court verdict that paved the way for the Ram temple’s construction and the scrapping of Article 370 as the Modi government’s two most significant achievements. The third — a Uniform Civil Code or a common law for marriage, divorce, custody, adoption and inheritance — is waiting in the wings. It has the support of 70 per cent of the respondents.

Furthermore, 53 per cent support the Citizenship (Amendment) Act. Another 54 per cent disapprove of inter-faith marriages, saying they are against Indian culture; 58 per cent want laws banning them. Fifty-four per cent believe a widespread ‘love jihad’ conspiracy is on to convert Hindu women. The fact that a majority of the respondents see Uttar Pradesh chief minister Yogi Adityanath as a worthy successor to Prime Minister Modi and the best chief minister in the country buttresses India’s swing towards the Hindutva agenda. This trend is more pronounced in the BJP bastions of northern and western India than in the south where, barring Karnataka, the BJP has yet to make any inroads. The lack of an effective Opposition to act as a countervailing force makes the BJP’s task easier. A majority of the respondents believe the Congress is not doing a good job as an Opposition party. Hindutva is thus swiftly filling the ideological vacuum. Our cover story, ‘Hindutva Reigns’, captures what now appears to be a popular sentiment.

But even with such a strong backing of the people, comes a cautionary tale. The economy and jobs distress should be a mounting worry for the prime minister and his government. The Modi government’s biggest failure is its inability to deal with unemployment successfully. Considering that Prime Minister Modi has always railed against corruption, it is a matter of concern that 76 per cent of the respondents feel corruption has increased in the country. Additionally, a majority of the respondents regard the government’s economic policies as benefitting only big business.

If not urgently addressed, these warning signs could fester into problems for Prime Minister Modi and his government. He has enormous goodwill among the people but needs to seize this opportunity to deliver on economic reform before it is too late.