After a high intensity see-saw match that went well over 15 hours, Bihar saw the National Democratic Alliance (NDA) emerge on top of the Mahagathbandhan by a margin of 15 seats.

The grand alliance has cried foul in many seats and so has the NDA in some, both demanding a recount of numbers where they expected a win but their candidates lost by wafer-thin margins. 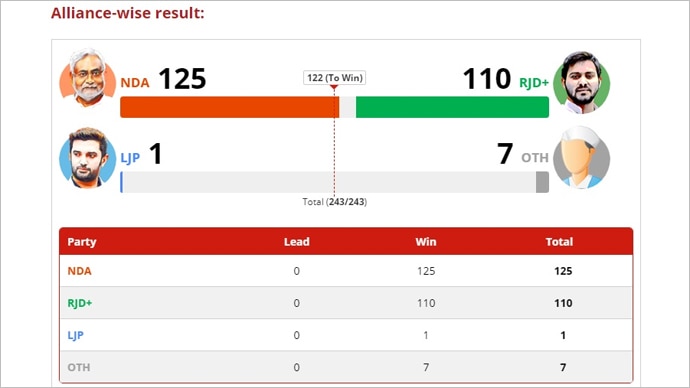 So close was the contest that the single-largest party and the second largest party in Bihar have a difference of all but one seat between them. Since a miss is as good as a mile, Rashtriya Janata Dal (RJD) is Bihar’s top choice of a party on an individual level.

Bihar’s elections were, however, contested at the coalition level. While being part of coalition helped Janata Dal (United) leader Nitish Kumar sail through to yet another chief ministerial stint, it could be precisely what came in the way of RJD.

Here are five factors that turned defining for Bihar.

In 2015, the BJP emerged as the single-largest party in terms of vote share garnering 24.4 per cent of the votes polled. It could, however, win just 53 seats ranking third after RJD with 80 seats and JD(U) with 71 seats.

With Nitish Kumar’s popularity on the wane and people in Bihar not inclined to vote for the RJD, the BJP knew it could do well in Bihar. The party was still not sure it could firm up the base enough to win on its own. For BJP, coalitions are a temporary tactic to make inroads in regions and then use Modi’s popularity to establish solitary control.

Ahead of elections, BJP had to concede ground to the JD(U), promising no matter who gets more seats of the two, the chief minister would be Nitish Kumar. With Shiv Sena and Akali Dal having deserted the NDA coalition, the BJP had little choice but accept the condition. Modi’s popularity continues to be a stable factor in BJP’s electoral politics, with all other factors subject to change in the face of local factors. In the long run, a person-centric politics is a bad strategy for the BJP; in the short run, BJP has won Bihar – not JD(U), which is now a junior partner.

Congress is a liability

The Indian National Congress looks to have pulled down the Mahagathbandhan, winning just 19 of the 70 seats it contested on. There is no denying the Congress got many seats in the seat-sharing deal that neither Congress, nor RJD had won ever. Yet Congress had fared poorly in comparison with its own 2015 performance when it won 27 seats.

In 2015, CPI(ML) had won three seats, while both CPI and CPM drew blanks. The marked difference for the Left was aligning forces with the RJD.

The 2020 Bihar assembly elections mark the end of Mandalisation of politics and the emergence of a national party in the state for the first time after Congress lost ground.

Politics in Bihar had remained centred on the forces unleashed by the Mandal movement of 1990s. RJD founder Lalu Yadav dominated the first phase of this Mandalisation project. Under Lalu, political power moved from upper castes to Bihar’s backward communities. Then came Nitish. His tenure saw the empowerment of communities that Lalu had failed to reach out to. Caste violence, which had become common in Bihar, gradually subsided during Nitish’s rule.

Bihar elections in 2020 have however been fought on the issue of economic development, with youth and women emerging as groups that can no longer be ignored.

BJP, which till about late 1990s when the Atal Bihari Vajpayee government came to power was seen as a party of the upper castes, has been working hard to present itself as a development-oriented party. The Rashtriya Swayamsevak Sangh (RSS) is in an overdrive to ensure Dalits are part of its Hindutva project. The alleged exclusion of the community from Sangh’s scheme of things has often been used to pull down the RSS. Modi’s slogan of Sabka Saath, Sabka Vikas and Sabka Vishwas is borne of out this plan to appear religiously and socially secular.

In July, Tejashwi sought an apology from people for what might have happened during his parents’ rule. “I was young when the party was in power. Still, if there were any mistakes, I apologise for that.”

People have proved unforgiving for the mistakes. From Nitish to Modi, everyone tried to ensure people to not forget the 15 years of rule that RJD gave Bihar between Tejashwi’s father Lalu and mother Rabri. A rule that had seen shops down shutters at dusk and people send their sons to other states for education lest they be kidnapped for ransom in RJD’s ‘jungle raj’. Modi called Tejashwi the “Jungle Raj ke Yuvraj”.

Then, Tejashwi also had his fair share of mistakes. The entire Lalu family is seen to be corrupt. The 2015 alliance between Janata Dal (United) and RJD broke ostensibly on the issue of corruption allegations against Tejashwi and Misa. People in Bihar have seen how Lalu’s children continue to own farmhouses and bungalows even as the people of Bihar struggle to make ends meet.

A total of 54 per cent men are said to have voted this election as opposed to 59 per cent women. Both Nitish and Modi have found immense favour from women voters.

In Bihar, the jungle raj had seen women being picked up and raped at whim.

Nitish’s social engineering, unlike many other leaders, did not leave out women. Women were given reservations in local body elections and government jobs. Nitish also made provisions to ensure girl students do not drop out of schools. From cycles to scholarships, the Nitish government ensured women in Bihar were not left behind in the development agenda.

The JD(U)’s bid to introduce prohibition made many women Nitish loyalists. Gone are the days when women voted in line with their husbands in Bihar. Today, women have chosen to vote independently.

It is the women voters who could have made the big difference between Mahagathbandhan 110 and NDA’s 125.

The results, of course, have lessons that will need to be remembered beyond Bihar.

#Tejashwi Yadav, #BJP, #Nitish Kumar, #Narendra Modi
The views and opinions expressed in this article are those of the authors and do not necessarily reflect the official policy or position of DailyO.in or the India Today Group. The writers are solely responsible for any claims arising out of the contents of this article.