The Delhi University on February 28 told the Delhi High Court that it cannot share the exam records of students who had pursued Bachelor of Arts courses in 1978, the year in which the varsity claims Prime Minister Narendra Modi had graduated.

(The university was responding to an RTI plea by activists seeking the court’s permission to be part of the case involving DU and the Central Information Commission.)

This has again brought back the controversy over Modi’s educational qualification.

There are serious questions over the authenticity of PM Modi’s BA degree from the University of Delhi and MA degree from the Gujarat University.  Though both the universities have released statements to support Modi’s claim in the past, they continue to refuse to share the information needed to allay growing suspicion over various anomalies present in the available documents - his name, date of birth and even his specialisation on a subject called “Entire Political Science”.

Taking the plea that the matter is sub judice, universities ignore to respond to RTI queries, and the controversy refuses to die down. 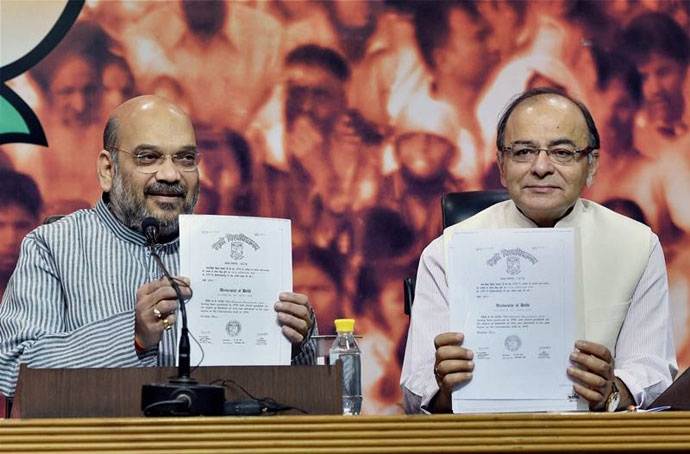 It is a serious issue of trust and credibility for the reputation of both the universities as well for India’s Prime Minister.

Legally, there is no need for the prime minister of India to have any formal academic degree, but at the same time it is illegal to lie under oath.

It is not only Modi, but his close confidante and cabinet minister Smriti Irani is also facing similar allegations regarding her educational qualifications.

The continuing controversy over Modi’s and to some extent on Irani’s degrees has started to create doubts over the dependability of India’s university degrees, which millions have rightfully earned as a result of their academic commitment and hard work.

Until now, unlike some foreign universities, degrees from Indian academic institutions are not looked with suspicion by international employers and universities. However, in this globalised world, the potential illegality of a few powerful ones can raise questions over the lawful deeds of all.

It is very surprising that the Indian media has not conducted any serious and sincere investigation on this “fake degree” matter, compared to even what their Pakistani counterparts did few years back.

In 2008, Pervez Musharraf amended election laws to make a university degree mandatory to become a member of Parliament.

In 2010, media in Pakistan exposed 54 fake degree holding MPs and the country’s Supreme Court took notice of it and legal proceedings were conducted against them, including the education minister of the country.

However, in 2012, the Constitution was amended to eliminate degree requirement, and no action was taken against the academic institutions that issued large number of fake degrees. That put a serious question mark over the entire university system of Pakistan.

It is critically important for a country to ensure that the degrees from its academic institutions are lawfully obtained and universally accepted. Otherwise, it seriously undermines the whole education system of the country.

In Kenya, politicians have a history of attaching the title of “Dr” to their names even without going to any university.

According to the electoral legislation enacted in 2011, candidates for county governors in Kenya required to be in possession of a local or foreign university degree from recognised and accredited universities.

In 2013 election, Kenya’s Commission for Higher Education (CHE) stood its ground and refused to accept “fake” degrees of powerful politicians forcing them to withdraw from the electoral contest.

This move in many ways restored the respect for country’s academic degrees not only inside that country, but also outside.

In 2008, a very powerful cabinet minister in Iran who was close to the then president Mahmoud Ahmadinejad was sacked by Parliament over his fake degree from Oxford University.

Bogus degrees are a problem worldwide, but a country’s academic integrity is judged the way it takes on this menace.

In April 2012, Pal Schmitt was forced to resign as president of Hungary when Semmelweis University rejected his PhD for allegedly plagiarising sections of his doctoral thesis.

A year before, Karl-Theodor zu Guttenberg had to resign from his job as Germany’s defence minister after he was caught for plagiarising part of his legal doctorate.

He was then widely considered as the heir apparent to Chancellor Angela Merkel.

Not only country’s ministers, two German members of European Parliament have also recently resigned after forfeiting their degrees due to plagiarism.

In 2008, West Virginia University revoked a degree it had unlawfully awarded to the daughter of the then West Virginia governor. That scandal led to the resignation of the university president and a number senior administrative staffs. There is no doubt, the issue of fake degrees put the credibility of the country’s entire education system at stake. Thus, it is important that the political and legal system deal with it legally and strongly.

As is in the case with Narendra Modi, the questions about the legitimacy of Turkish President Recep Tayyip Erdogan’s bachelor degree from Marmara University’s Faculty of Economics and Administrative Sciences have been simmering for some time.

His declared high school education from an imam-hatip school does not allow him to join Marmara University, so there is certain possibility that his university degree is fake.

If the allegation is proven then Erdogan will have to resign as it is mandatory under the Turkish Constitution for the president to hold a university degree. However, Erdogan’s authoritarian rule has prohibited a careful investigation on this matter of serious constitutional importance.

By following in Erdogan’s footsteps, the Narendra Modi government it seems is doing whatever it can to throttle any independent and open investigation to establish the authenticity of his controversial university degrees from the University of Delhi and the Gujarat University.

Not only in a democratic country like India, ethically and legally the prime minister’s educational qualifications should be above suspicion. It is also critical to restore faith in the functioning of the university system of the country and instil trust in the genuineness of its degrees.

While the university authorities and investigative agencies seem to be under political pressure not to pursue this allegation of fraud, the reluctance of the media to investigate this matter with vigor and courage is very puzzling as well as disturbing.

No doubt, the forced institutional silence over it puts the well-earned reputation of India’s enviable higher education system seriously at risk.