Naya Pakistan: Will it be a country of accountability?

Nothing changes in Pakistan. Today what is happening is a mere repetition of what has happened again and again.

He was jailed in 1977. He was the most popular politician in the complex history of Pakistan. Millions loved him. He was hailed as a saviour speaking dil se, loud and sincere, secure and confident in his awami suits, shalwar-kameez of aam aadmi that he turned into the garb of a hero who would change their fate.

He waited for those millions to march on roads for his release. He waited for a revolution. The people never marched. The revolution remained a mere hope for that one leader whom the masses adored, the middles class supported and the elite idolised.

He was pragmatic, farsighted, stoic. He knew his country that he awakened with “Roti, Kapda aur Makaan” had changed. He no longer wished to have people “come out on the streets and litter them with their blood. He asked his cousin, his political confidant, not to give a call to the people because that would ‘reopen River Indus’. He said he was ready to die but wished that the people should live.”

He was hanged on April 4, 1979. His hanging that took place in the dark of the night without a proper last meeting with his family, and the wrapping of his by then frail body in a drab shroud, came to be known as the judicial assassination by a group of men made up of half the judges of the bench that gave the ruling against him and General Zia-ul-Haq, the military dictator guised as the president of the country. In his hanging, he turned into a martyr. He was hanged for an unproven conspiracy to murder of Nawab Mohammad Ahmad Kasuri.

Before his hanging, he was jailed in a tiny room where a naked bulb remained lit most of the time, with a gum infection that deteriorated, clothes that hung loose on his once lean and proud but now “waifishly thin” body, “his bearing and his demeanour in the last appalling months were noble. He would not be beaten by adverse circumstances, would not beg, or plead.” Zulfiqar Ali Bhutto did not request for mercy. He did not make a deal. (Photo: Twitter)

His name was Zulfiqar Ali Bhutto. He was 51 when he was hanged. He was hanged one dark night, silently, in the presence of a few men who knew what they were doing was a deed that did not fit into any box of justice, but did not have the slightest idea how that one ordinary noose would tighten around the destiny of Pakistan turning it into an abyss of missteps and blunders that would set into motion destruction and more destruction.

Zulfiqar Ali Bhutto did not request for mercy. He did not make a deal. He did not leave the country after making a deal. There was no plea for a pardon covered in the self-facing title of self-exile or a government exile. Years later, there were leaders of Pakistan who after ruling Pakistan, making a mockery of everything that was good and decent about the power they were bestowed upon by the power of vote or machinations of a military coup, left Pakistan simply to avoid legal persecution for various cases against them.

While in power, their idea of lording over Pakistan was devoid of any long-term strategy as their work ethic for development was short-term, their love for their country focused on cosmetic handling of its apparent flaws, their plans for stabilisation of economy ad hoc, their policies good in theory and empty shells in practice, their slogans noble and their actions self-serving, their decisions for their people myopic but well-defined about their personal short and long term preservation, and government treasury on the verge of depletion but their assets on fast-track multiplication. One after the other, they persecuted one another, holding everyone but themselves responsible. (Reuters photo of Benazir Bhutto and Nawaz Sharif)

Pakistan suffered, its democratic edifice more fragile than a castle in the sand; its major institutions operational as if it was a game of children having a tea party in tiny plastic crockery; its major institutions run like a feudal fiefdom where the lord became richer while the world around him remained dark, bleak, stuck in a moment of nothingness; its promise of institutional reforms like a mirage of water in a desert; its development of human and natural resources a splendid plan that elicited votes and guaranteed entry into power but without fruition folded like a damp paper fan and dreams of the proletariat.

One after the other.

In December 2000, Nawaz Sharif, the deposed prime minister, jailed for 14 months, after being granted an unexpected pardon for his life sentence from General Pervez Musharraf–Pakistan’s president after his ouster of the elected prime minister through a military coup — accompanied by his family, went into self-exile to Saudi Arabia. The charges against him were: “kidnapping, hijacking and corruption.”

In November 2007, Benazir Bhutto, the two-time prime minister, ended her eight-year-old self-exile after an NRO with Musharraf. The NRO nullifying “pending criminal proceedings” was said to be an instrument for “a politically negotiated transfer of power to the PPP; keeping Musharraf politically alive; and restraining the growth of judico-politico power.” 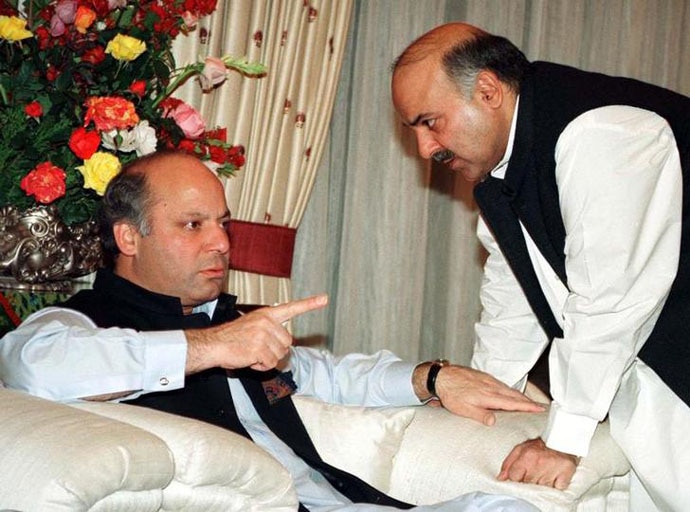 And in a Kafkaesque turn of events, one day Pervez Musharraf, that military dictator who promised to be the saviour of Pakistan’s today and tomorrow, went into self-exile. The case against him is still in process, but at 76, reportedly suffering from multiple diseases including a “life-threatening” one, Musharraf, now living in Dubai, is a regular absentee from court. The case against him under Article 6 of the Constitution and Section 2 of the High Treason Act is for “Benazir Bhutto assassination case, judges’ detention case and the Akbar Bugti case.”

Back to May 2019. While Nawaz Sharif is out on bail, and Nawaz and Maryam Sharif doing their legal and through-social-and-electronic-media-pressure best to be given permission to leave the county on the grounds of Nawaz’s medical issues, whose treatment exists in the UK and nowhere else, now the younger and the apparently wiser Sharif, Shehbaz, has also left Pakistan. His party says he would be back. His family other than his son Hamza Sharif is in the UK.

Nothing changes in Pakistan. Today what is happening is a mere repetition of what has happened again and again. It is not about the validity and falsehood of cases against former prime ministers, presidents and chief ministers. It is not about guilt or innocence. It is not déjà vu of persecution of the powerful of the out-of-power. It is about the convoluting of the system. It is about the accumulation of wealth in Pakistan and leaving Pakistan when it is convenient. It is about absolute power and an absence of fear of accountability. It is about the establishment of a propaganda machinery to establish that a legal mechanism is an instrument of state persecution and that legal accountability is a political witch-hunt. It is about manufactured political victimhood to evade a justified legal mechanism. It is about crying hoarse, stunned but arrogant: how could this happen to us, we the mighty, we the unanswerable? Will justice be the same for the poor and the powerful, the ruled and the ruler? (Photo: Reuters)

Will Prime Minister Imran Khan be true to his promise and hold the alleged and the proven corrupt accountable? Will there be a reckoning of deeds of all, be they the members of his family, leaders of his party, retired military generals-turned-presidents, or former prime ministers and chief ministers? Will justice be the same for the poor and the powerful, the ruled and the ruler? Will the law be bent as per political expediencies and silent manoeuvring for future self-preservation? Will all those who ruled Pakistan, be they military dictators or elected prime ministers, be held morally accountable in the court of 120 million Pakistanis, and legally accountable in the highest courts of Pakistan?

Also Read: Why the recent 'sexist spat' in Pakistan reminds me of Game of Thrones

Post your comment
#Nawaz Sharif, #Benazir Bhutto, #Imran Khan, #Naya pakistan
The views and opinions expressed in this article are those of the authors and do not necessarily reflect the official policy or position of DailyO.in or the India Today Group. The writers are solely responsible for any claims arising out of the contents of this article.