NRC final draft: The people without a post office

As the largest democracy on earth is debating the citizenship status of four million human beings left without a post office and identity, I'm reminded of Raja Ushinara. This tale from the pages of Mahabharata is one of the finest examples of how we should behave and protect those seeking refuge.

Here is the story:

A pigeon comes to the court of King Ushinara seeking asylum. The poor bird was being chased by a hawk. The king tells the hawk that the pigeon is in his "sharan" (refuge) and it’s his duty to protect him. The hawk tells the king that the bird is, in fact, his diet and he can’t starve. The king offers the hawk anything of his choice as a replacement, but the hawk refuses to change his mind. Finally, the hawk puts a condition — “give me some flesh from your body if you actually want to protect the bird”. Ushinara agrees and offers his body parts to the hawk. 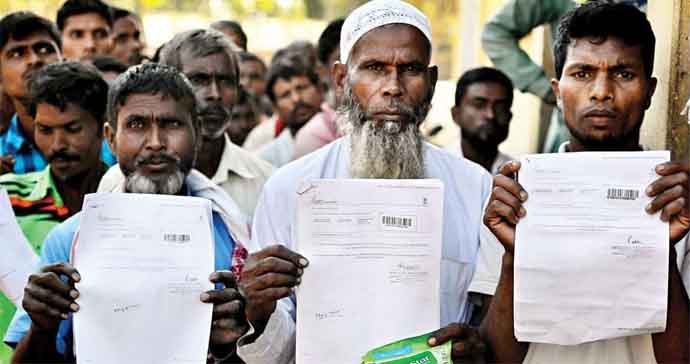 No government should be allowed to deny any single Indian his/her right to citizenship. (Credit: PTI file photo)

The story has a deeper moral. During 1971, we welcomed the migrants from Bangladesh to India. They were both Hindus and Muslims. For us, they were all human beings seeking refuge in India and we allowed them to. Today, when the "cleansing attempt" to ensure that Assam remains a state only for Indians, we are left with 40 lakh people possibly with no legal status in our country.

On July 30, the much-awaited second and final draft of the National Register of Citizens (NRC) was published. Out of 3,29,91,385 applicants, 2,89,83,677 have been found eligible for inclusion in the complete draft of NRC. However, names of 40,07708 persons have been excluded from final draft.

While the desperation of the ruling government has fast-forwarded the process of identifying illegal immigrants, the entire exercise has spread panic among those who are at risk of being rendered stateless — from old women in villages to those in detention camps, children in schools to youths with dreams for a brighter future — this move has shaken the state and its people.

Indeed, there are people who have infiltrated into the state from Bangladesh border during the past few decades. It is also important to acknowledge that with this NRC, the onus of proving citizenship is on the people and not the state. With a big population without proper documents, changing addresses and status due to floods and work-related migration, it is difficult to establish who is a genuine Indian citizen.

Ultimately, the borders are man-made. So is citizenship. All humans are born on earth, but the complexities of life and livelihood force them to travel from one state to another, one nation to the other, crossing hills and dales and mountains and boundaries. The migrants make our lives easier with their labour, but wht do they get in return?

The slums in cities like Mumbai and Delhi didn't surface through any legal and official process. People came to these cities and built their homes. A big population becomes the foot soldiers of these mega-cities. They provide all kinds of services and labour, and help us live better and comfortable lives. But what do they get in return — dingy lanes and stinky shanties without any proper sanitation or potable water. And if that's not bad enough, these migrants are often thrown out of their slums to execute some big-ticket development projects.

The question here is — why are the departments concerned never held accountable in the first place for letting such slums come up, or such migrants crossing the borders. Are we to assume that the BSF, the police and the municipalities turned a blind eye in exchange of bribes? And now for the sake of "great national service", these people are declared illegal.

It's good to keep our borders safe. It’s necessary to restrict infiltrations. There is a system to ensure this and if it fails, the responsibility must be fixed. It is indeed important to identify the migrants, but what if we end up declaring our own people illegal in our own country. With issues of marriages, displacement, work-related migration and the lack of adequate documents due to illiteracy, denial and discrimination on the basis of caste, religion and linguistic parameters, there are chances of denying our own people the right to citizenship.

No government should be allowed to deny any single Indian his/her right to citizenship.

Migrants are everywhere. From the World Cup-winning football team of France to Tamils in Sri Lanka. Migration is a reality. All we need is to deal with them in a more humane and respectful way.

They too are humans.

All migrants are not criminals and not all citizens abide by law and the Constitution. The NRC has triggered a panic in the border state. Instead of fuelling a civil war, we have to find a dignified and responsible solution to this problem.

And yes, keep the borders safe. Migrants don't appear out of thin air. We must understand who is responsible for checking such infiltration in the first place.