How the judiciary should tackle the Odisha lawyers strike

In Harish Uppal vs Union of India, a Constitution Bench of the Supreme Court held strikes by lawyers to be illegal.

However, despite this decision rendered in 2002, lawyers, who are supposed to uphold the law, often flagrantly flout this ruling and go on strike, sometimes on flimsy pretexts. The latest strike is in Odisha, where lawyers have been on strike throughout the state since August 28 over an incident in which a lawyer was allegedly beaten up by some policemen.

Though 2 police constables and a havildar have been suspended, the strike continues, even after a Supreme Court order asking lawyers to resume work. When I became Acting Chief Justice of Allahabad High Court in August 2004 a lawyers strike had been going on all over UP, in the High Court and in district courts, for about a month. I appealed to lawyers to resume work but to no avail.

In this connection, I may mention that in all bar associations while the majority of lawyers get fed up of a strike after a few days since their incomes are adversely affected, there is a small group of militant lawyers who are adamant in continuing the strike, and of whom the majority are afraid.

So I called a Full Court administrative meeting of High Court Judges and told them that this state of affairs could no longer be tolerated. There are thousands of litigants wanting bail orders, stay orders, etc but they could not even approach the courts, whose gates had been locked by striking lawyers.

I then detailed my plan of action. I had prepared a draft of the resolution to be passed by the High Court Judges, and read it out to them. These were:

1.) From the very next day, all judges of the High Court and subordinate courts would sit in court at the scheduled time. If they were stopped from entering the court premises by lawyers, the police must arrest those lawyers, and ensure entry of the judges.

2.) The cases will be called out, and even if lawyers are absent, orders must be passed by the Court. Judges must do their judicial work in court, and not at their residence.

3.) To deal with militant lawyers, who were obstructing the functioning of the court, CCTV cameras would be put up inside and outside the court premises, and lawyers caught on camera committing obstruction will be arrested by the police.

This resolution was passed by the Judges, and circulated to all district courts in UP immediately, and publicised in the media.

Apart from the above, I directed the Registrar General of the High Court to inform the DGP, UP that policemen must be posted in groups inside and outside the court premises at vantage points where they were not easily visible, but from where they can be quickly called to any place where they may be required to deal with a situation.

The result was that the strike broke up within a couple of days. 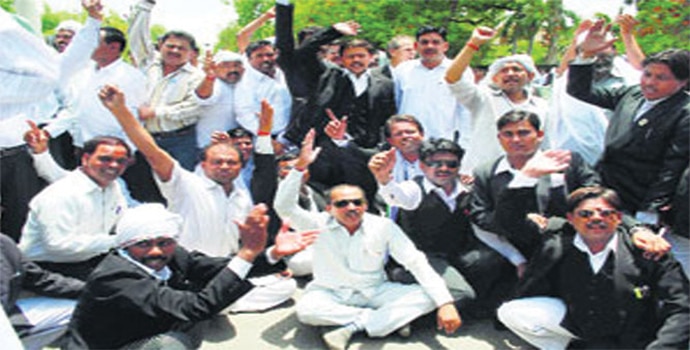 Despite the SC ruling, lawyers across the country have gone on strikes even on flimsy pretexts. (Photo: Facebook)

I went to the Madras High Court as the Chief Justice in November 2004, and a few months thereafter the lawyers went on strike over some issue. I called the President of the Advocates Association and told him about the method I had applied in UP and would apply the same method here too unless the strike was immediately called off. The next day the strike ended.

When I became Chief Justice of Delhi High Court the Tees Hazari lawyers went on strike against the opening of a new district court in Rohini. The lawyers vandalised 26 Courtrooms in Tees Hazari, about which I received a report from the District Judge in which about two dozen lawyers were named as the principal miscreants.

I immediately constituted a bench of the 5 senior-most judges, and we issued notice to those named lawyers, and also passed an interim order directing the police that until further orders these lawyers will not be allowed to come within 500 metres of the court premises. The result was that within a couple of days the strike ended.

So my experience tells me there is no difficulty breaking up lawyers strikes, and I commend my method to all Chief Justices.