How Pakistan is looking at the Indian Lok Sabha elections 2019

For Pakistan, Modi’s term is marked with hyper-nationalistic Pakistan-hating in the backdrop of the unfortunate Pulwama incident and its warlike Balakot aftermath. Many wonder what the future now holds for bilateral ties.

India awaits on May 23 the result of its seven phase-long elections. In the world’s biggest democracy, the elections are for 543 seats of the Lok Sabha, the lower house of Parliament. And, yes, to do the most important thing: elect the next prime minister. The numbers and logistics of the biggest voting exercise of the world’s biggest voting demographics are staggering, to state it without much drama. India’s elections have taken place in 29 states and 7 federally-administered territories, with 2,354 registered parties, is comprised of 900 million voters, one million polling stations, and 2.3 million electronic voting machines. Some of them are said to have malfunctioned.

With the hope of having a bigger turnout than the 66% of the 2014 elections, there are many an exit poll and predictions of psephologists and political analysts, hopes and boasts and prayers of competing parties, confidence of party members and supporters of Rahul Gandhi, wishes of an India-for-all cheerleaders, and the expectations of those who voted for the BJP in 2014, giving Narendra Modi’s party a landslide victory and an electoral knockout punch of 44 seats to the INC.

For observers of Indian politics like me, political analyses on Indian television and newspapers are a mixed bag of the predicable pre-during-post-elections reactions and viewpoints that are, unsurprisingly, not too dissimilar from the commentary I hear in Pakistan when it is gripped in the frenzy of an election that has the power to change its fate for the next five years.

In 2014, there was a clear Modi wave that, true to predictions, won the BJP the biggest electoral majority in 30 years, sidelining the INC to such parliamentary insignificance, it was as if the ten-year-in-rule INC was never in power. 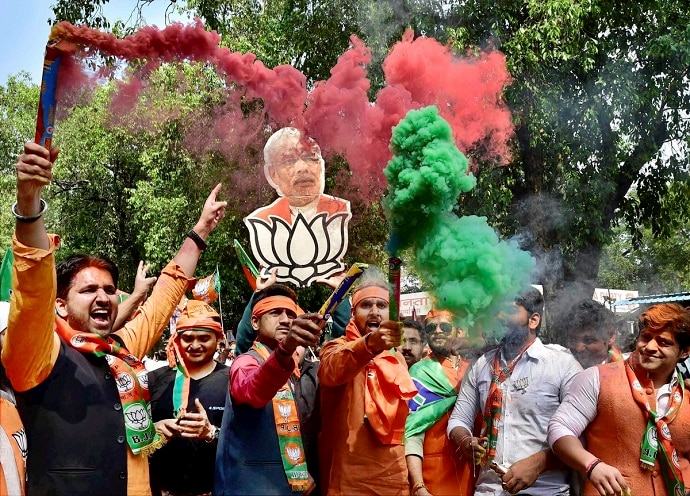 The Modi wave in 2014 led the BJP to a massive electoral majority, sweeping the Congress away. (Photo: PTI)

In Pakistan, Narendra Modi’s victory and his taking charge of the position of the prime minister of India was taken, at various stages, with trepidation, caution, restrained hope, a measured expectation of relationship-recalibration and moving beyond the stagnant status quo of simmering hostility.

For Pakistan, the end of Modi’s term is marked with hyper-nationalistic Pakistan-hating and Pakistan-attacking in the backdrop of the very unfortunate incident in Pulwama and its warlike aftermath in Balakot and the aftermath of Balakot.

Today in Pakistan, Modi and his government are viewed with cynicism that is not surprising, given the events of February and the we-are-not-talking-to-one-another (non)-relationship status of the two countries that, in an ideal world, based on their geographical proximity, historical one-ness and shared cultural and other factors, should be good friends, business and trade allies and regional partners. Today, Modi’s India in Pakistan is considered a xenophobic, anyone-other-than-Hindu-hating economic behemoth whose magnificent shades of pluralism and diversity have been dipped into a stark hue of saffron and intolerance.

Beyond that view, there is not much of a commentary on Indian elections in Pakistan.

The truth always prevails and is always the best policy. BJP's attempt to win elections through whipping up war hysteria and false claims of downing a Pak F 16 has backfired with US Defence officials also confirming that no F16 was missing from Pakistan's fleet.

Contrary to the perception in India, there is never really any interest in Indian elections in Pakistan, my complex, beloved country that is invariably and constantly entangled in a circle of its own domestic issues, big and small, affecting the everyday life of most Pakistanis. Those who have been elected to rule Pakistan are busy figuring out ways to put Pakistan in order, without sideways glances on things that are of no immediate concern and countries that love to hate Pakistan. 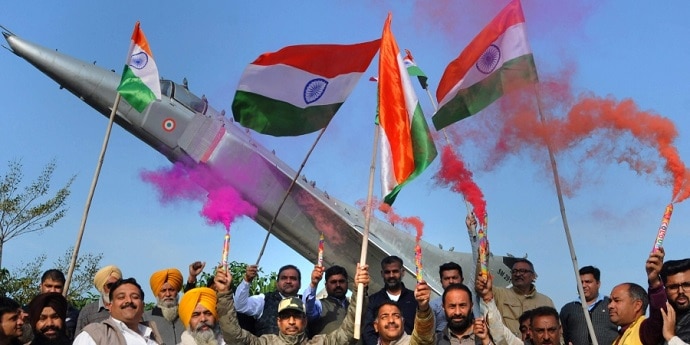 So I simply asked a few people whose opinion I respect, whose analytical viewpoint is based on their deep understanding of issues, and who for their professional background and present occupations have keen insight into the dynamics of Indian politics and their effect on relations with Pakistan. Without adding my own commentary to their responses, I thought I’d simply write down their answer to my straightforward question: “Is there any discussion on Indian elections in Pakistan?” And their listing in alphabetical order is simply a tiny manifestation of my writing-OCD and is in no particular order in terms of the significance of their comments or position.

Abdul Basit (Former Pakistan ambassador to Germany and high commissioner to India; former Foreign Office Spokesperson): Yes, we do have an interest in the outcome of elections to the extent that we want this [Pakistan and India] bilateral relationship to move forward, to make a new beginning by resolving bilateral disputes and to promote bilateral and regional cooperative frameworks. In fact, much hinges on India. It [India] must understand that our respective national aspirations cannot be fully realised in an unstable regional environment. India as a bigger power has more responsibilities in this regard.

Ajmal Jami (Talk show host, Dunya News; political analyst): There is a discussion on the Indian elections in Pakistan. I have hosted a couple of shows, rather, three to four shows on Indian elections. Since they are phase-wise, the discussion is not that extensive. When they started, we focused on the first phase. Then Pakistan’s issues are such we have to concentrate on them. But some people like me are keeping a close eye on the Indian elections. Of course, it [our coverage] is not as extensive as that of our own elections but some things connected to these elections — if Modi is bullying someone or if he is being bullied, if the turnout is small somewhere, the Kashmir issue, etc., are discussed. This time the Indian elections are very interesting, quite interesting. They're watching him closely across the border too. (Photo: PTI)

Asma Shirazi (Veteran TV Talk show host, Aaj News; political analyst): There are no discussions on Indian elections in our media because one, we are busy with our economic situation, and two, we don’t even much discuss the regional situation any more. I think we are more concerned about our own economic and political situation, and our media thinks that is more important for our audience.

Ayesha Raza (Senator Pakistan Muslim-League-Nawaz; chairperson Senate Committee on Rules of Procedure and Privileges): We support democracy and would want a democratic transition in India through free and fair elections. We hope to work with whichever party forms government in India as a result of free and fair elections, to improve relations [between Pakistan and India] in the long term. We also hope to sit on the table with the new government to resolve the long-outstanding Kashmir issue.

Aziz Ahmed Khan (Former Pakistan high commissioner to India and ambassador to Afghanistan; former additional foreign secretary and Foreign Office spokesperson): As for elections, Modi and the BJP are not as confident as they were at the start of the elections. Statements from their leadership, particularly Modi, make it quite obvious. Their tone is becoming more panicky and content abusive.

Fahd Humayun (Political behaviour and South Asia analyst; Jinnah Institute): The outcome of this election will matter less than the consistent demonisation of Pakistan on the campaign trail. Most of the damage has been done; the groundswell of public opinion in India is vehemently against the idea of peace with Pakistan and in favour of a hardline foreign policy, even if that means flirting with war.

Jalil A Jilani (Former foreign secretary, ambassador of Pakistan to the US, High Commissioner to India): In Pakistan, mostly people are looking at the likely impact that Indian elections will have on the Pakistan-India peace process. The last five years can be termed as wasted years due to an absence of dialogue, high-level tension, intensified repression in Kashmir, stagnant trade, and negligible people-to-people contacts. It is hoped that the post-election Indian government will have a fresh look at its Pakistan and Kashmir policy.

PJ Mir (Veteran TV talk show host; Aap News, Indus News; political analyst): These Indian elections I can assure you are going to play a very important role in the future of Indian political history. These elections should be taken in the right spirit because for the future relations of India in the region, these elections do matter, will matter and will continue to matter. Therefore, the theme of peace, tranquility and harmony in the region all depends on who the Indians elect.

Also read:How Pakistan's behavior is hitting international air traffic and its own economy