The residents of Goa were in for a pleasant surprise last week when Goa chief minister Pramod Sawant informed the media that 10 Congress MLAs had decided to join the BJP for the development of Goa. That the leader of opposition in Goa Assembly, Chandrakant Kavlekar, also joined the BJP and became deputy chief minister under Sawant proves how rudderless the Congress is — ridden by infighting — and the fact that CM Sawant has been able to inspire legislators even in the opposition to join him in the development of Goa. Kavlekar even said he is joining the BJP with nine other MLAs as he has confidence in the CM's vision.

Sawant’s stature further rose as all 10 MLAs joined BJP voluntarily and in a smoothly. The procedures were completed with the speaker being notified of Congress' merger with two-third legislators into BJP. The speaker accepted it as per rules and hence the tally of BJP rose to 27 in the 40-member Assembly. This is the highest figure BJP has achieved and it has been possible due to years of hard work of leaders like former CM Manohar Parrikar, Union Minister Shripad Naik and CM Sawant. 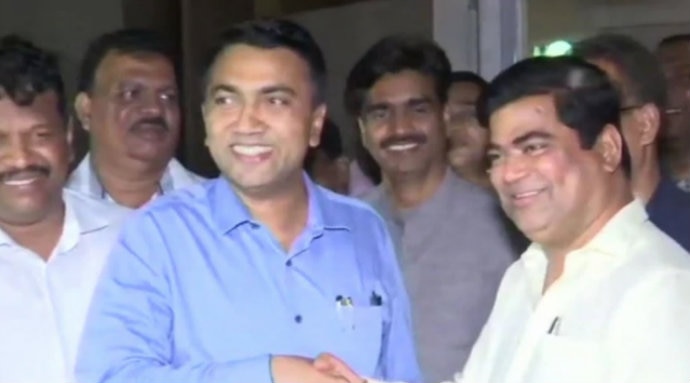 The political uniting of two major communities in Goa — Hindu and Catholic — will lead to greater development in the state. (Photo: ANI)

This has ensured that Goa will see a stable majority government for the remaining tenure. Goa goes to polls in early 2022. This gives Sawant the opportunity to work on issues related to infrastructure, agriculture, mining, fisheries, health, housing, education and jobs. The tourism sector will see a thrust with the 50th International Film Festival of India being held in November 2019. Goan industries will also benefit as Sawant has a business and investor friendly approach — Goa is hosting the Vibrant Goa - Global Expo And Summit in October to invite major corporates to invest in the state.

Resumption of mining activities is a primary target of the Goa CM now, with no more coalition compulsions and pressure, which were being put by the Goa Forward Party's leader and former deputy CM, Vijay Sardesai, who had his own chief ministerial ambitions and was not allowing the BJP government in the state to focus on serving the people. The CM, by sacking the Goa Forward Ministers and appointing three of the newly inducted BJP MLAs — Chandrakant Kavlekar, Philip Neri Rodrigues and Jennifer Monserrate — as deputy CM and ministers, respectively, has ensured there will be unity in decision-making and vision. Michael Lobo, the fourth MLA to be made minister was the deputy speaker and a powerful Catholic community BJP leader. Hence Sawant will be able to focus on outlining a policy for mining, which takes Goan environment conservation into consideration and convince both the Centre as well as the courts on the positive impact of mining on the Goan economy. The minority community has, in the recent past, lent its support to the BJP in Goa, starting from endorsing Parrikar as CM in 2012, in the wake of corruption charges against the Digambar Kamat-led Congress government from 2007-2012. By inducting Catholic leaders and making them ministers, Sawant has shown that the BJP government in Goa is working on the principle of 'Sabka Saath, Sabka Vikas' as outlined by Prime Minister Narendra Modi. This political uniting of two major communities in Goa — Hindu and Catholic — under the banner of BJP, along with increasing trust in Sawant, will lead to greater development in the state. It is also a reminder to BJP critics of the party's inclusive nature, with a primary focus on the progress of the people. That three of the four newly inducted MLAs are Catholics just reiterates the fact.

The Congress, which even put up token protests in Parliament, must realise that it is a party without a national president and is unable to offer any leadership to its MLAs. Since the people view it as a corrupt party, it is natural that those aiming for development of their constituencies will collectively join a party like the BJP that offers a stronger leadership, both nationally and in Goa. As one of the MLAs said, "In Congress, all senior leaders in Goa want to be CM, hence there is no unity.’’

One can, in conclusion, only say that Sawant has played a masterstroke by inducting 10 Congress MLAs into BJP. This will lead to an improvement in the lives of ordinary Goans and bring stability, progress and prosperity in the beautiful state of Goa.