Pranab Mukherjee at RSS event: Much to cheer for BJP, Sangh

Former President Pranab Mukherjee’s June 7 visit to the Rashtriya Swayamsevak Sangh’s (RSS) headquarters in Nagpur has brought in several gifts for the Sangh and the BJP.

While many have tried to explain away the momentous visit by saying that Mukherjee has personal ties with Mohan Bhagwat, and, as President, had even broken protocol to receive the RSS chief, that is only a tiny part of the story. 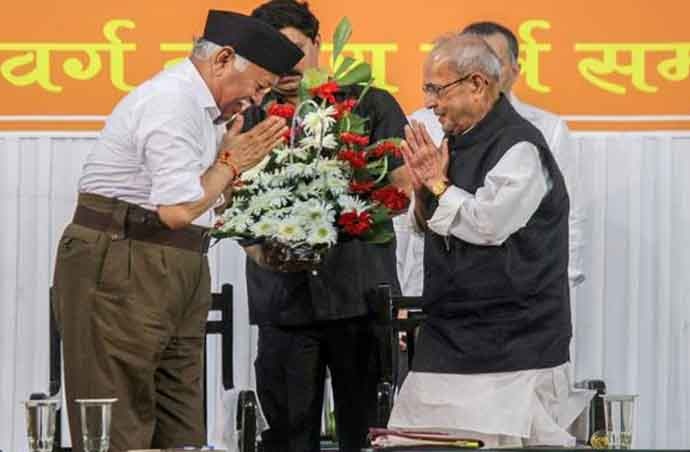 The news of Mukherjee’s accepting the RSS invite was met with immediate outrage, not just from his own party, the Congress, but from other political parties as well as experts and activists. The former President was repeatedly advised to stay away from the event, including by his daughter and Congress leader Sharmistha, who warned him that his speech would be forgotten, but pictures of him with RSS leaders would haunt Mukherjee forever.

However, one needs to understand why the RSS, in a carefully crafted move, chose to reach out to Mukherjee.

The first and obvious benefit of the step was the unprecedented publicity the event, the Tritiya Varsha Sangh Shiksha Varg, received. Usually a side news item, the event this year dominated prime time slots, and was telecast live on most major news channels.

The curiosity of seeing Mukherjee in the RSS’s courtyard kept people glued to their TV screens, and the entire nation watched as swayamsevaks went through their moves and marches, after which their president Mohan Bhagwat took the stage.

Conscious of his larger audience, Bhagwat, though he did speak of the Hindu rashtra, kept his speech controlled, and tried to present a more accommodative picture of the Sangh. The RSS chief’s statements of unity in diversity, of all Indians, irrespective of religion and caste, being the children of Bharat Mata and sharing a common ancestry, are sure to strike a chord with moderate Hindus too.

The Sangh has realised that the emotive issues of Jinnah are fading in front of the real questions of ganna and to win over voters, it needs to present a more tolerant face. Thus, both the BJP and the RSS have set out on outreach drives. Bhagwat’s address with former president and Congress-man Pranab Mukherjee on stage was nothing less than the opening speech of the RSS’s battle for 2019, and it has managed to use Mukherjee rather well to refurbish its image.

Benefits for the BJP

The second largest beneficiary of June 7’s event has been the BJP. The saffron party well knows that it is in no position to repeat its 2014 General Elections performance in 2019. Sources say that the BJP is likely to change its candidates in 150 constituencies. It fears defeat on 80 of the seats it currently holds in the Parliament. However, it is hoping to win 50 new berths, some of which are in Odisha and Bengal.

In this scenario, a tall leader from Bengal, Pranab da, speaking from the RSS stage, is likely to fetch rich dividends for the BJP in the state. The party will leave no stone unturned in linking Pranab’s invitation and speech to Bengali pride and milking it electorally. For Odisha, it is being heard that Prime Minister Narendra Modi is likely to contest the 2019 polls from Puri. 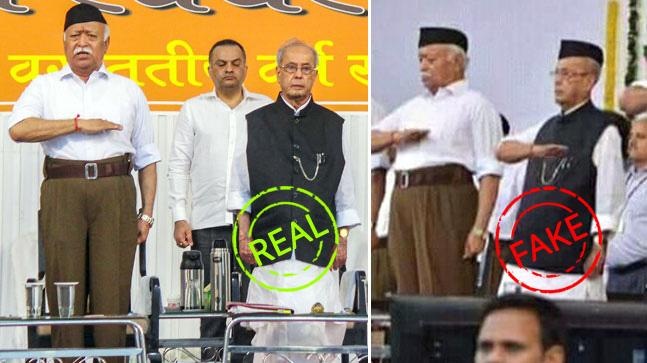 If both these moves work, the BJP will be sitting pretty indeed. According to sources, Amit Shah is hoping to win 22 seats from Bengal.

Apart from this, Mukherjee’s presence at the RSS event has also helped the BJP’s ongoing mission of appropriating Congress leaders. Gandhi’s spectacles have become the symbol of Modi sarkar schemes, the government is literally moving boulders for Sardar Patel’s statue. The PM himself has appeared hard at work to get an Ambedkar memorial constructed and to highlight the Congress’s “ill treatment” of the Dalit leader.

The BJP also keeps inviting family members of Subhas Chandra Bose and Lal Bahadur Shastri to its events, in order to chip away at the Congress’s claims on these icons and present the Congress as just one family’s party.

Mukherjee’s presence at the RSS stage is also both a warning and a way forward for Congress old-timers. Ever since the event, the Sangh and the BJP have been singing paeans in Mukherjee’s praise, which sends out a distinct message to dissatisfied veterans within the Congress. Several Congress heavyweights have already joined the BJP.

On social media platforms, however, the dirty tricks of morphing images and twisting statements have already begun. The photos doing the rounds present a true picture of neither Mukherjee’s presence, nor his message. How the former President’s image will suffer because of these remains to be seen.

The biggest benefit for the RSS, however, is that the Congress, which has accused it of numberous charges, from saffron terror to Mahatma Gandhi’s murder, now faces a Vibhishan in its own home. In the past, Congress president Rahul Gandhi has termed the RSS and the BJP “fascists” and “enemies of democracy”. This stance is difficult to reconcile with a senior Congress leader sharing the RSS stage.

Another crucial fact is that the BJP and the RSS want the Congress to stay mired in the traps they set for it. At a time when the Opposition should be taking the government to task over its performance, the Congress is struggling with its own differences and discrepancies.

The Sangh and the BJP, thus, are clearly setting the agenda and pulling the strings here.

The Opposition is merely tripping over them.