The Congress may do whatever fire-fighting it wishes to, but the fact is that it's a clear case of closing stable door after the horse has bolted.

How does one interpret former president Pranab Mukherjee's rather indulgent conduct towards the Rashtriya Swayamsevak Sangh (RSS) by attending the BJP political ideologue’s function and visiting its Nagpur headquarters?

It boils down to just one conclusion: that the 82-year-old former Congressman is on a personal political expedition. He must be emboldened by the fact that Mahathir bin Mohamad has just taken over as the prime minister of Malaysia at the ripe age of 93.

And there is nothing written in the Constitution of India which debars a former president from becoming the prime minister of India even though such an experiment has never happened in independent India. In any case, he is comparatively younger and would be just 83 by the time the results of the next general elections kick in. Just in case the BJP turns out to be way short of a majority, but is yet the single-largest political party in the 543-member Lok Sabha — quite a distinct political scenario — then Narendra Modi cannot be the next prime minister. 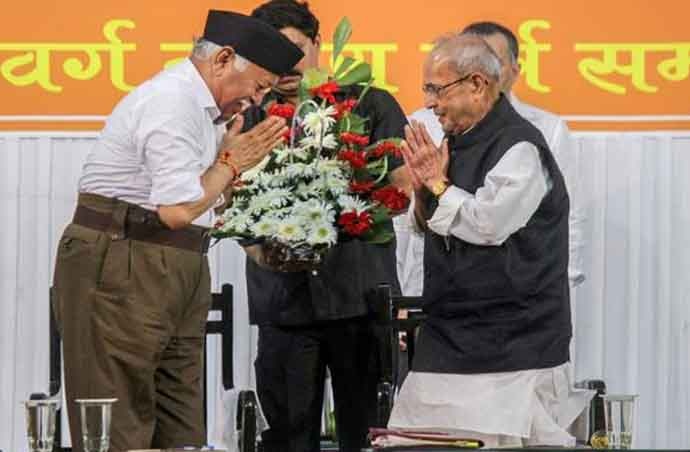 An ace up his sleeve: Mukherjee has played his cards in a clever manner.

In that scenario, from the RSS viewpoint, the possibility of a Rahul Gandhi-led Congress government has to be averted at all costs. In such a scenario, a so-called “national government” can be formed with Pranab Mukherjee as the consensus prime ministerial candidate with BJP support, whether from inside or outside. That seems to be a workable plan B, from the RSS perspective, in 2019 to keep the Congress out of power.

The Congress party has been torpedoed by the very fact that a tall former Congress leader like Mukherjee, who as finance minister in UPA 2 government headed as many as 52 groups of ministers (GoMs) and was the government’s work horse, has now legitimised an organisation like the RSS which he himself had vilified as a Union minister by visiting its headquarters. Congress leader Randeep Surjewala is merely indulging in a bit of fire-fighting by saying that Mukherjee's visit to the RSS headquarters led to a wide range of discussions and concerns.

“Today, Pranab Mukherjee has shown the mirror to RSS at their headquarters. He talked of plurality, tolerance and multiculturalism."

Now cut to some quotable quotes of Mukherjee at the RSS function:

■ “We derive our strength from tolerance. We accept and respect our pluralism... Any attempt at defining our nationhood in terms of dogmas and identities of religion, region, hatred and intolerance will only lead to dilution of our national identity."

■ “The soul of India resides in pluralism and tolerance. This plurality of our society has come through assimilation of ideas over centuries.”

■ “We must move from conflict, violence and anger and move into harmony and peace.”

■ “Every day, we see increased violence around us. At the heart of this violence is darkness, fear and mistrust.”

The Congress party may do whatever fire-fighting it wishes to, but the fact is that it's a clear case of closing stable door after the horse has bolted. Pranab Mukherjee is today a party-less man being a former president and can well play the role of a statesman rising above party politics. This is what he has done by visiting the RSS headquarters and describing RSS founder KB Hedgewar as “a great son of Mother India” — a remark that the Congress chose not to comment on.

However, the Congress unease is captured in the following tweets:

The images of Pranab Da, veteran leader and ideologue at RSS Headquarters have anguished millions of Congress workers and all those who believed in pluralism, diversity and the foundational values of the Indian Republic.

I did not expect this from Pranab da ! https://t.co/VBqXZ8x7SE

Hope @CitiznMukherjee now realises from todays’ incident, how BJP dirty tricks dept operates. Even RSS wouldn’t believe that u r going 2 endorse its views in ur speech. But the speech will be forgotten, visuals will remain & those will be circulated with fake statements. 1/2

But in the aftermath of the Mukherjee speech at the RSS event, the Congress is trying to put up a brave face. The grand old party is now trying to indulge in a salvage operation. The fact remains that Mukherjee has played his cards in a clever manner.

The RSS has a plan to prevent Congress president Rahul Gandhi from taking over as the prime minister in case the 2019 general elections throw up a hung Lok Sabha, a highly likely scenario. In such an eventuality, Mukherjee could emerge as a consensus prime ministerial candidate with the blessings of the RSS and the BJP. That would finally fulfil Mukherjee’s old ambitions. After all, politics is the art of turning impossible into possible.

Post your comment
#Mohan Bhagwat, #Nagpur, #RSS, #Pranab Mukherjee
The views and opinions expressed in this article are those of the authors and do not necessarily reflect the official policy or position of DailyO.in or the India Today Group. The writers are solely responsible for any claims arising out of the contents of this article.