Narendra Modi has political equity and people’s mandate for radical reforms. This is an opportunity India cannot afford to miss.

The Prime Minister’s address on this Independence Day was arguably his best in seven years. Shorn of rhetoric or lofty announcements, it was the perfect mix of heart and strength. He exuded confidence and resolve, on the one hand, and held out optimism and empathy on the other, while delineating his vision of the future.

No one can find fault with Narendra Modi’s articulations as a statesman. This August 15 too he checked all the right boxes and touched all the right chords. He started with diplomatically dressed-up warnings for those who may have expansionist designs on India “LoC se LAC tak”. He thanked the corona-warriors and expressed condolences to those who had lost family members to Covid-19. He shared the progress on the coronavirus vaccines and assured the nation of the government’s preparedness to ensure the vaccines reached across the country as soon as they were cleared for use.

Quite naturally, PM Modi also presented a report card on his government’s achievements on various fronts in the last six years. Surely, there can be differences in perception on several counts. However, the progress made by this government through the use of digital technology – particularly in the area of Direct Benefit Transfer — is undeniable. This has served the country well in distribution of financial assistance under several welfare schemes in the post-pandemic scenario. In our penchant to find fault and criticise, the Modi administration has not received commensurate credit for ensuring food security during the extended lockdown. 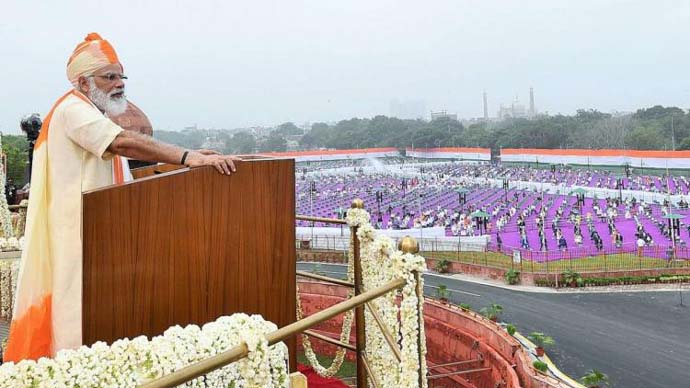 Prime Minister’s address on this Independence Day was arguably his best in seven years. (Photo: PIB)

The Prime Minister said that the biggest learning from Covid-19 has been in the area of healthcare. The Herculean effort to scale up testing capabilities from a mere 300 tests per day four months ago, to over seven lakh tests per day now, has not been appreciated. Similarly, ramping up production of masks and PPEs in a short time has been nothing short of spectacular. Going forward, setting up of the National Digital Health Mission (NDHM) is the logical next step for the tech-savvy government.

Equally praiseworthy has been this government’s focus towards women’s empowerment. It has been pointed out that Narendra Modi is the first Prime Minister to talk of sanitary napkins from the ramparts of the Red Fort on Independence Day, a time when menstrual periods are still a taboo topic in our society. Distributing five crore sanitary napkins at Re 1 per piece is no mean feat. But the distribution of menstrual hygiene products from Jan Aushadi Kendras takes the level of awareness to another level altogether. Provision of enclosed toilets and supply of subsidised gas cylinders even through the lockdown shows a different order of gender sensitivity.

However, there are parts of the Prime Minister’s speech, though sincere on intent, fail to measure up on delivery. This pertains primarily to Modi’s call for transforming India into an industrial economy and manufacturing powerhouse. Couple this with the promise of ‘ease of doing business’ and it looks like a goalpost in a mirage.

In his speech, the Prime Minister mentioned the need for local value addition. He emphasised the importance of climbing up the food chain from exporting raw materials and minerals, to finished products. Being candid, Aatmanirbhar Bharat sounds like a vernacular repackaging of the Make In India programme announced during Modi 1.0. If India has failed to emerge as a sourcing destination despite the heavy-duty roadshows and PR push by the government, there is a need for serious introspection.

To be fair, every government since Independence has emphasised the importance of industrial development. Till the 1990s, we had the ‘control Raj’ culture to blame. But even after the first wave of liberalisation, manufacturing in India did not take off as it did in many developing countries; not just China; in the last two decades. There are some fundamental flaws ingrained in our system and psyche that require clinical correction.

When Narendra Modi assumed office, he picked up his favourite slogan of ‘Maximum Governance, Minimum Government’. Today, Modi’s most ardent supporters will not accept the brief to defend him on this claim. GST has demonstrated how bureaucratic landmines can derail the best of legislations. Every attempt at simplifying income tax structures has made compliance more cumbersome. Hence, any mention of ‘ease of living’ evokes cynicism in the middle-class. But the buck does not stop there.

Land and labour reforms will not move forward if the state governments are not aligned. There are a plethora of approvals to be obtained at the local level. Environment clearance is another contentious area that remains precariously perched between the state government, Centre, activists, and often the judiciary. Tales of travails faced by investors in starting new units have enough material for making several OTT channel docudrama series.

That does not mean businesses and investors are all lily-white and squeaky clean. Paying taxes does not come naturally to us, whereas greasing palms appears so much simpler. Statistics of the number of people who pay the income-tax in a country of 1.3 billion is just the proverbial tip of the iceberg.

Besides, keeping a hand on the heart, we cannot pledge that producing world-class quality has been our best suit. By glorifying jugaad, we have made the idea of adopting shortcuts in manufacturing a virtue. 'Aatmanirbhar' has acquired a totally different connotation.

A huge ecosystem has grown around the ‘control-Raj-corruption’ regime that dates back to the pre-Independence era. It is like a giant banyan tree that has grown roots across establishments and stakeholders. This cannot be removed surgically, as it would also involve a change in the national mindset.

Such massive transformations can happen only if all sections of society are aligned to a single mission. History indicates that meta-changes have always been preceded by a crisis that was seized by a strong, visionary and charismatic leader at the helm.

This can be the moment for India. Covid-19 has provided the burning platform. Narendra Modi has political equity and people’s mandate for radical reforms. This is an opportunity India cannot afford to miss.

Also Read: Why is it always Delhi? PM Modi should end Lal Qila’s monopoly as the Independence Day speech site

#Women Empowerment, #Covid-19, #Aatmanirbhar bharat, #Independence day 2020
The views and opinions expressed in this article are those of the authors and do not necessarily reflect the official policy or position of DailyO.in or the India Today Group. The writers are solely responsible for any claims arising out of the contents of this article.