As the BJP’s popularity ratings dive, the Gandhis-Bachchans seem to be coming closer.

Perhaps ‘Mamun’ knew it well before others.

Priyanka Gandhi’s formal induction into politics has an interesting side-story involving megastar Amitabh Bachchan, whom she has fondly addressed as ‘Mamun’ (maternal uncle) since her childhood.

The Bachchans and the Gandhis seem to be moving closer again.

Days before the announcement of Priyanka taking office as the AICC general secretary in charge of eastern Uttar Pradesh was made, she apparently held a private meeting with Amitabh Bachchan in New Delhi.

The actor reportedly gave his blessings to Priyanka. 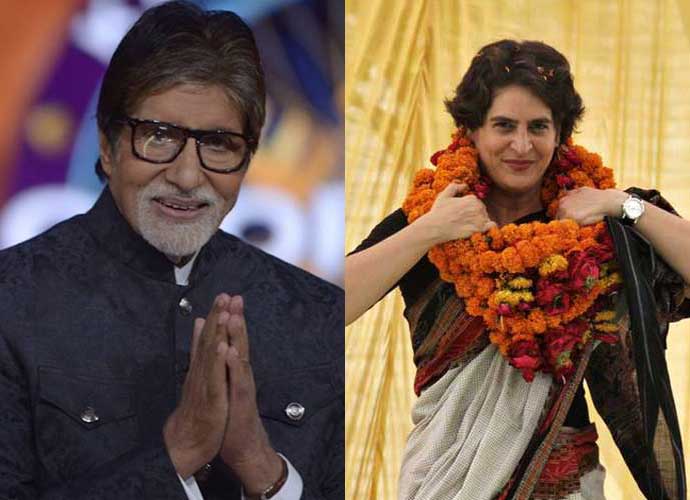 So who is meeting and greeting whom? (Photos: YouTube/Reuters)

The Gandhi-Bachchan re-union comes after an estrangement of more than 18 years — significantly, at a time when the countdown for the 2019 General Election has started.

The news of the country’s two most illustrious families having a fallout broke out in the year 2000. The break-up was more due to human failings — a combination of personality clashes and the need for one-upmanship amid failures and personal tragedies.

A lot of water has flown under the bridge since — but if the Gandhis agree to cross the bridge and befriend Amitabh Bachchan again, the presence of Big B, wife Jaya, son Abhishek and daughter-in-law Aishwarya could be a rich source of strength for Rahul, Priyanka and Sonia Gandhi.

Informed sources say Amitabh takes his role as the ‘elder statesman’ of the film industry very seriously. Recently, he has faced a lot of criticism for sucking up to the right-wing regime, especially when it seems to be turning a blind eye to the alleged suppression of free speech, film censorship, harassment of journalists, etc. — not to mention harassment of minorities. The Gandhi-Bachchan fall-out had all the elements of a classic Bollywood drama. (Photo: India Today Archives)

Some 43 years ago, Amitabh had faced the same criticism when he stood by Sanjay Gandhi during the 19-month Emergency, which had curtailed freedom of speech, creativity and the rule of law. Throughout the Emergency, Amitabh had remained silent on the ban imposed on Kishore Kumar by All India Radio (AIR) and Doordarshan, and the ostracism of the likes of Pran and Dev Anand, both outspoken critics of the government. In return, film journalists faced stiff censorship — even a gossip item about a young Amitabh and the sensational Zeenat Aman was not tolerated.

After Sanjay’s death, the entry of Rajiv Gandhi saw Amitabh offering his signature voice at the 1982 Asian Games opening ceremony in Delhi’s Jawaharlal Nehru stadium. Rajiv, the chief organiser, sat in the front row as Amitabh anchored the show.

Following the Bofors uproar, Amitabh, then Congress MP from Allahabad, left politics, disillusioned. The superstar had been accused of being a middleman in the scam. Amitabh fought for his honour and won a protracted legal battle, but he could not sever his links with politics.

Amitabh’s parting of ways with the Gandhis significantly contributed to Rajiv’s downfall.

The Allahabad Lok Sabha by-elections in 1987 gave a fragmented Opposition a sense that together, they could humble the Congress — then holding a massive 413 MPs in the 542-member Lok Sabha. The Bachchans could add a lot of star power to the Gandhi galaxy. (Photo: India Today)

Since 2014, Amitabh has often been accused of remaining diplomatically silent when many actors of the younger generation, like Aamir Khan — his nearest competitor as a 'thought influencer' of the entertainment industry — have spoken out. Amitabh has been heavily trolled on social media for his silence. Anyone who knows the mega star well knows that Amitabh is very sensitive about being criticised on public fora.

Sources close to the Bachchans and the Gandhis say the two sides have silently been working towards peace for more than a year.

It started with Amitabh following Congress leaders — Rahul Gandhi, Manish Tewari and many others — on Twitter, and they in turn were happy to have him back.

In February 2018, a poster was put up in Bachchan’s hometown, Allahabad, with a tagline ‘Aa Ab Laut Chalen’, requesting the filmstar to return to the Congress fold. The poster featured Rahul, Rajiv Gandhi and Amitabh, and carried a line from a song in the 1980 Bachchan-starrer Dostana, ‘Bane chahe dushman zamana hamara, salamat rahe dostana hamara’. 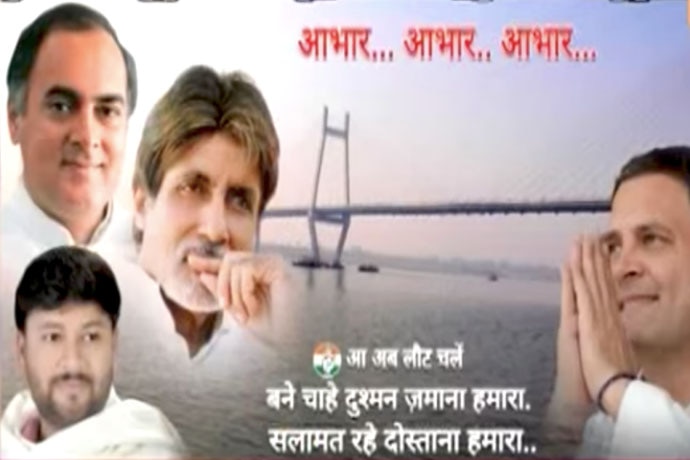 Informed sources say that of late, Amitabh has been very conscious of his standing in his home state of Uttar Pradesh. This was one of the reasons he repaid loans of more than 1,000 farmers here.

For some, the Gandhi-Bachchan reunion, coming at this point of time, is part of politics. According to this school of thought, Amitabh is a master of reinvention and a good weathercock. 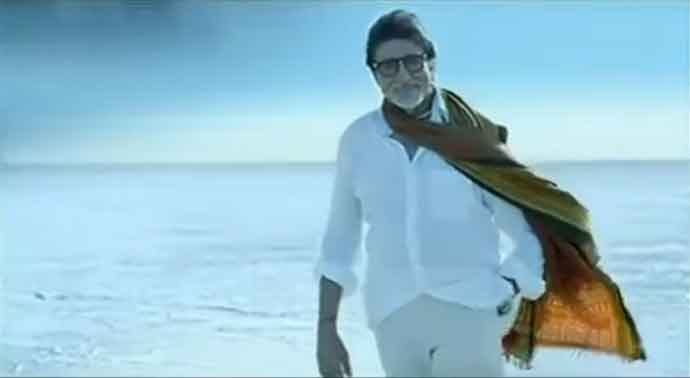 Which way does the wind blow? Amitabh Bachchan has featured in Gujarat tourism ads. (Photo: YouTube)

The actor is reportedly keen to distance himself from the Modi regime (having previously appeared on TV promoting Gujarat tourism and the central government’s Income Tax department) in context of the fluid political situation.

The idea, according to the cynic, is to avoid making himself a politically polarising personality in the public’s perception, particularly when NDA-BJP ratings are declining.

But then, what is in it for 10, Janpath, or Priyanka Gandhi? Only time will tell.