Priyanka's litmus test would be in whether she can move beyond the optics now and step up the game.

As the Congress cavalcade approached the Transport Nagar metro station, Sonu Singh called out, urging us to hurry. I sprinted towards the Scooty, ready to pillion-ride with the mic in my hand. Sonu Singh, a Congress worker, had helped me keep ahead of Rahul and Priyanka Gandhi's roadshow. However, at the moment, he excitedly looked towards the bus and waved.

Surprisingly, Priyanka spotted him and waved back, exchanging courtesies, even asking how he was with a media team.

I can tell you that this Congress loyalist would never forget those seven seconds that Priyanka gestured at him.

Thereafter, he kept singing praises of how grounded she was and how she cared for the party workers. "Priyanka ji was asking me how I was. She wanted to know how come I was with you on a scooter. You know, I got this especially from Amethi for the roadshow...", said Sonu, with a bright smile. 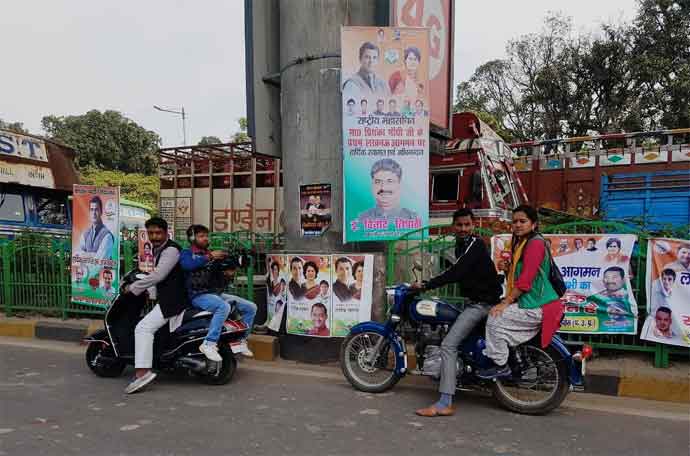 Sonu Singh, driving the Scooty, would never forget those seven seconds that Priyanka gestured at him. (Photo: India Today)

Priyanka Gandhi Vadra's journey ahead ain't no bus ride though. She needs to correct the past mistakes her party has made and turn the tables to make history, a clear high-risk, high-gain formula — with the odds stacked against her.

The extra-long roadshow in the capital of Uttar Pradesh was a good start — but it also exposed the malnourished state the Congress was in. With all the hype and hoopla, the Congress managed good crowds in some pockets, while some stretches ran dry. Most of the party workers were old Congressmen. The youthful energy was missing.

That said, the SPG had a tough time handling the netas who hopped on to that bus and jostled to climb the roof to be seen in the same frame with Priyanka and Rahul.

Even Rahul's pleading fell on deaf ears as many heavyweights preferred the roof of the bus, instead of standing on the road along with the grassroots workers to greet their leadership. Every time Priyanka has made a public appearance, she has sent out a clear message through her gestures. (Photo: PTI)

The decked-up historic Congress office in Lucknow looked impressive in pristine white, but, as the saying goes, 'all that glitters is not gold'. The ailing party needs a Sanjivani booti to revive it. Whether she will be the sankatmochak for the party still remains to be seen, but Priyanka not making a speech was a huge disappointment and played a dampener on the occasion.

Just days ago, at the Congress headquarters in Delhi, workers scurried for cover but even the cold rain showers couldn't dampen their spirits. They hadn't budged from the lawns since the morning, waiting to catch a glimpse of the latest debutant from the Gandhi family.

Inside the meeting room, Priyanka sat in the middle of Congress office bearers, quite like a new student who is the centre of attention on her first day in class. She wore a red dupatta and black coat but hardly looked up at the curious cameras, engaged in a conversation with Jyotiraditya Scindia instead.

Interestingly, Congress president Rahul Gandhi sat in the other corner, watching his sister Priyanka hog all the limelight.

Both of them have different temperaments and styles and comparisons would be inevitable.

Every time Priyanka has made a public appearance, she has sent out a clear message through her gestures and demeanor. Flashback to a hot summer night last year — the Congress took out a candle light march in Lutyen's Delhi to protest the brutal rape and murder of a minor in Kathua. The biggest challenge for Priyanka is to carry forward the legacy of her role model, her grandmother, former PM Indira Gandhi. (Photo: India Today)

As I walked speedily back then, trying to track the leaders right in the middle of the road, women workers sat down making a ring. All eyes were fixed on the articulate speaker at the centre of it all. In the dark of the night, as camera lights spotted her, the ring swelled up, buzzing like a beehive, with the over-enthusiastic crowd pushing and shoving for a selfie. Clad in a blue printed kurta, Priyanka looked focused, trying to control the unruly situation.

"Please don't forget for what have you come ....? You all need to be patient and behave ....", she said in a stern tone. As she spoke, she made direct eye contact with the protestors standing in the thick circle.

In the middle of this cacophony, she shot a quick glance at me, ensuring that my eyes stayed on her, then nodded in acknowledgement. She has an ability to engage, but consistency remains the key. Remaining under the spotlight has the risks of over-exposure and to sustain one's presence, one needs a strong narrative.

Let's rewind to a scene from 2017, at the relaunch of the National Herald at Jawahar Bhawan. I caught her exiting the gate and took the chance to ask her opinion on the burning issue of lynchings in the name of cow vigilantism. "Of course it makes me furious when I see these things on the internet...it makes my blood boil...and I think it should make every right thinking Indian's blood boil", she responded unhesitatingly.

Her look was intense and choice of words powerful.

There was no hitch and the flow of her speech had a clarity and sharpness that carried her message loud and clear.

As Priyanka steps into active politics now, she carries the mammoth responsibility to better the fortunes of her grand old party — but the biggest challenge for her is to carry forward the huge legacy of her role model, her grandmother, former Prime Minister Indira Gandhi. 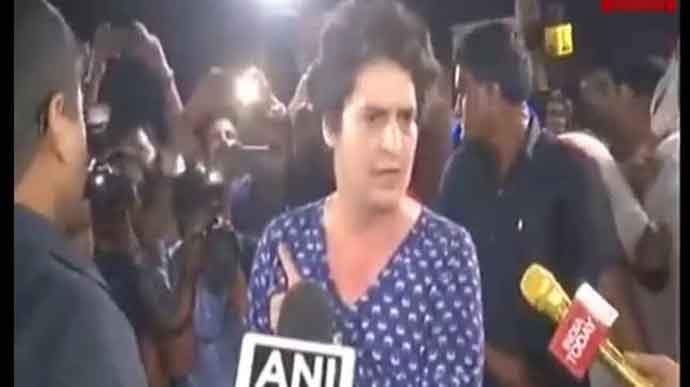 As she spoke, she made direct eye contact with the protestors standing in the thick circle. The crowd fell silent. (Screengrab)

News channels are already over-churning the visuals they have of her ever since she returned. The question looming large is, will she be able to step into the shoes of the Iron Lady of India? Will she emulate the larger-than-life persona of Indira?

Or will she chart her own course?

The politics of legacy is a double-edged sword — it gives you a head start but is fraught with perils. In trying to carry forward the legacy of a political heavyweight like Indira, Priyanka would be subject to harsh scrutiny and ridicule from rivals.

The younger Gandhi scion has confessed in a past interview that she draws a lot of inspiration from her family — but her success will depend on how fast her learning curve is.

In Gandhi's ancestral town of Allahabad, her grandmother is still remembered for her dynamic style. She would often walk to a Congress worker's house to have a cup of tea or sit on the chabutra at Kamla Nehru hospital, chatting with the nurses and hospital staff.

Priyanka's litmus test would be whether she can move beyond the optics and step up the game.

The comparison with her grandmother can be flattering — but it will also put her through a more arduous terrain and in the long run, if results don't show, then it can become burdensome.

Then, of course, in election season, there is a fresh breed of pumped-up sycophants, dressed in super-white kurtas with a high adrenalin rush. They have already announced a 'Modi-mukt' Bharat'. Priyanka will do well to rein in the bizarre sycophancy that has often been highly rewarded in the grand old party.

Time is ticking now and she has to straightaway head for the final examination.

Only the results will tell whether she was a true 'exam warrior' or not — even as the Congress president has been realistic enough to say that he isn't expecting a miracle overnight.

Also read: Priyanka Gandhi Vadra and the perils of dynasty

#2019 Lok Sabha polls, #Uttar Pradesh, #Rahul Gandhi, #Priyanka Gandhi
The views and opinions expressed in this article are those of the authors and do not necessarily reflect the official policy or position of DailyO.in or the India Today Group. The writers are solely responsible for any claims arising out of the contents of this article.