When India brought Pakistan to its knees: How the 1971 war was fought and won

As TV studios drum up hysteria today, a look-back at how a decisive victory was executed in saner times by a PM who exemplified calm under fire.

In the wake of the horrific Pulwama terror attack, as some TV news channels have begun beating war drums at full volume, a quick recap of the 1971 war may interest discerning readers.

During the 1971 Indo-Pak conflict, Prime Minister Indira Gandhi conducted herself with remarkable patience and restraint. She won the war decisively — splitting Pakistan into two, with the new country, Bangladesh, consisting of over 60 per cent of Pakistan’s population.

In the lead-up to the war, faced with over 10 million refugees from East Pakistan, Indira waged a multi-pronged strategy. To her Defence chiefs, she gave complete freedom and adequate time and resources to gear up for action. Her only condition was that the war should be brief, without creating international complications and bringing others into the field.

While the actual war commenced on December 3, 1971, Indira had told our Lok Sabha as early as on March 27, 1971: “In a serious moment like this, the less we as a government say, I think the better it is.” She spoke in the Rajya Sabha on the same day, saying, “A wrong step, a wrong word, can have an effect entirely different from the one which all intend.”

For over six months, between March and October 1971, Indira wrote letters to world leaders, appraising them of the situation on the Indian border. She visited Moscow — and undertook a 21-day tour of Germany, France, Britain, Belgium and the USA. She tried to arouse the world’s conscience over the merciless butchering of the civilian population in East Pakistan and the savagery of General Tikka Khan.

Indira permitted a government in exile by the Awami League near Calcutta, but refrained from according any formal status to it. When the Opposition became more vociferous, seeking the recognition of Bangladesh, Indira commented in August 1971: “There are some in the country who are attempting to make political capital out of the Bangladesh issue… this is no occasion for irresponsible action… the government will take any such step (recognition of Bangladesh) only after careful consideration of all aspects of the question.” 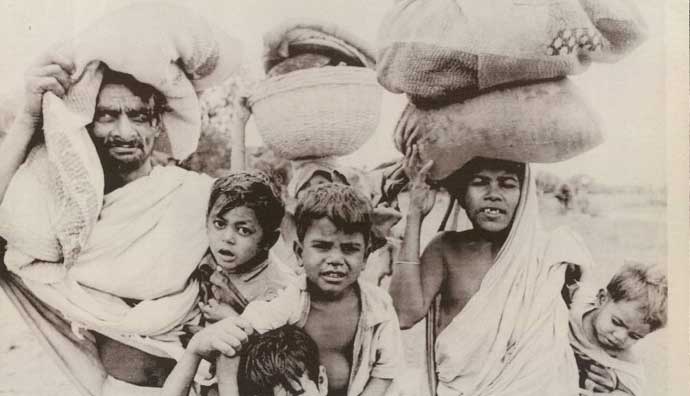 Throughout 1970-71, Pakistan faced a civil war, where the country’s populous eastern part was controlled by civil and defence personnel from the western region — officials who had no regard for the Bangla language, customs and heritage.

In 1970, the Awami League under Sheikh Mujibur Rahman won 169 out of 313 Parliamentary seats in Pakistan, but he was denied the office of prime minister. In fact, Pakistan’s military dictator General Yahya Khan arrested Mujib and imposed martial law on East Pakistan.

The Bangladesh government puts the figure at three million.

Many academics state that the first time rape was consciously applied as a weapon of war was during the Bangladesh War of Independence.

As per one estimate, over 300,000 Bengali-speaking women were raped.

Even as the Bangla Liberation movement unleashed guerrilla warfare under the aegis of the Mukti Bahini, blowing up railway lines and bridges, the Pakistan army launched a barbarous offensive.

Indira bided her time — even as Yahya Khan and Tikka Khan lost patience. On December 3, 1971, a pre-emptive strike on eight air-fields from Srinagar to Barmer was made. This ensured that India did not have to initiate a war. It was Yahya Khan who imposed martial rule in East Pakistan. He lived to regret it. (Photo: Wikimedia Commons)

Indira was in Calcutta that day and rushed to Delhi to address the nation. In her measured voice, she informed countrymen that a “War has been forced on us.”

Our Army, Air Force and Navy fought spectacularly well — a Pak submarine, Ghazi, was sank off Vishakhapatnam harbour and a surprise attack on Karachi made.

Even as India cruised towards a mighty win, the USA tried to intervene, moving its Seventh Fleet towards the Bay of Bengal. Indira was a picture of confidence and calmness. China maintained its neutrality while the USSR moved a fleet from Vladivostok to counter the USA armada. 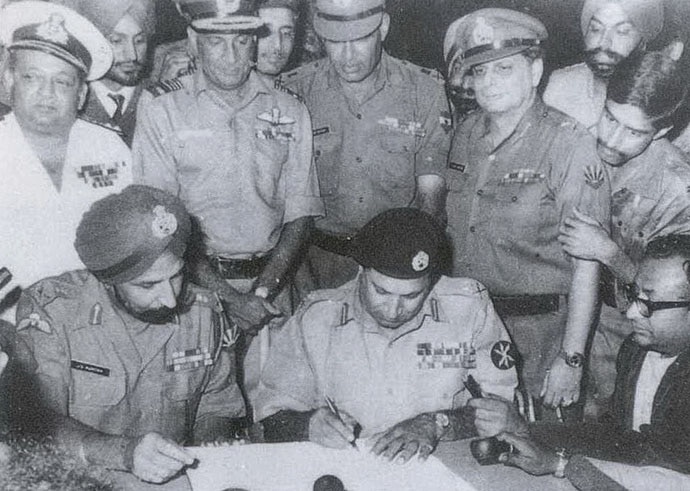 Post victory, Indira was quick to announce ceasefire. She made it clear to the world that India’s ambitions were not territorial, nor revengeful or expansionist. Throughout 1971, she gave the maximum weightage and importance to military commanders and did not act in panic or impulse.

Atal Bihari Vajpayee, then one of the front-ranking Opposition leaders, described Indira Gandhi as ‘Abhinav Chandi Durga’ for defeating Pakistan in the war. Vajpayee’s description of Indira as Durga helped the Congress Prime Minister cultivate a larger-than-life image. In fact, Indira apparently later told her friend and biographer Pupul Jayakar that she had had some intimations of ‘supernatural powers throughout the war and even previous to it, having had strange experiences’.

The 1971 victory was significant on many counts. The local population of East Pakistan was extremely hostile to the Pakistani army and civil services, while it greeted Mukti Bahini with open arms. Opinion in India was near-unanimous, backing Indira Gandhi to the hilt. For instance, Syed Shahabuddin, otherwise considered a ‘hawk’ among Muslim intelligentsia, had turned a vocal supporter of the creation of Bangladesh. He was in the Indian Foreign Service then and later wrote extensively on how the 1971 was a watershed year for Muslims in India.

“For the first time after 1971, Indian Muslims realized that Pakistan offered them no hope, no future and itself had no future. Muslims of India were and are convinced that the fulfillment of their aspirations depends entirely upon their standing in their own country, India,” Shahabuddin wrote, adding, “That realisation not only put Indian Muslims on the right track but also gave them the courage and determination to face their situation squarely, to stand up and assert themselves.”

According to Shahabuddin, the creation of Bangladesh gave a boost to the emergence of Indian Muslims as a factor in Indian politics.

Prior to 1971, Indian Muslims hardly spoke their mind — it was only after 1971 that they began to give voice to their opinions and became part of the national mainstream.