The US ‘condemning’ Pulwama is not enough. Given a range of complex new threats, India needs to keep its eyes, and its options, open.

As we mourn the 40 CRPF soldiers killed in the suicide car-bomb attack in Pulwama, it is important to show respect for the deeply personal nature of all such loss. However, the public nature of the attack — a terrorist one, probably aided by forces in neighboring Pakistan — also evokes loud political commentary. Mourning the Pulwama loss should not allow our politicians to make a spectacle of it. (Photo: Reuters)

Various political commentators jump out of their air-conditioned offices and explain it all with reference to Pakistani intrigue, Indian political failures, Chinese jockeying, etc.

It is in this context that I write this piece, hesitatingly, for to talk publicly about a great personal loss is to demean it to some extent. And yet, it has to be done. For there is also always the need to talk sensibly about any tragedy that has a public dimension.

In order to talk sensibly about the tragedy in Pulwama, one has to talk of another terrorist strike — this time, on the other side of Pakistan. It took place around the same time on the Iran-Pakistan border — 27 Iranian soldiers were killed in a suicide-strike that is said to involve a Pakistani. Around the time India was laying its martyrs to rest, Iran was reeling under a similar suicide bombing tragedy. (Photo: AP)

In both cases, there were grounds for pointing an accusing finger at actors in Pakistan, a country where certain forces have achieved the ability to bend governmental authority to their will.

Islamist, feudal and other forces, not least a military secret service fed on decades of US support, have their own agendas in Pakistan. This is partly the result of the faulty ‘religious’ rationale behind the creation of that nation, and partly the legacy of General Zia.

There are forces in Pakistan which do not represent the decent Pakistani citizen — which have turned that nation into a hotbed of fanaticism, feudalism and authoritarianism, and these forces would love to see India become a mirror image of what they have made Pakistan. General Zia: A good reminder of the damage that one man can do. (Photo: Wikimedia Commons)

To say so is not to absolve Indian politicians of their share of blame in failing to resolve the genuine problems of the Kashmiri people. Instead, it is to ask yourself this question — when something like the Pulwama attack takes place, do its perpetuators and backers not realise that it will only strengthen those forces on the Hindutva fringe that resemble them the most?

Of course they do. And that is what they want, for their ideological world is divided into ‘Islam’ versus ‘all the rest.’

Every action that makes this paranoid ideological world become more real is welcome to such Islamists.

But even this is not sufficient to understand what happened in Pulwama.

For that, we need to refer to another news event from roughly the same week — Donald Trump issued an ultimatum to European nations, demanding that they “take back” about 1,000 Islamic State (IS) combatants, now held prisoner by Americans and their allies in Syria and Iraq, even as the last bastion of IS collapsed in the Middle East.

Yes, take back, because these imprisoned IS fighters come from developed European nations; they have European passports.

Now, the question is this: if there are about a thousand such IS combatants, guess how many must also come from Asian nations, such as Pakistan and Afghanistan? And the next question: where will they be going as the IS ‘jihadis’ disperse from the fallen ‘Caliphate’?

I am certain US intelligence sources know that with the ‘Caliphate’ of the IS collapsing in Syria-Iraq, there will be an exodus of trained jihadists to neighbouring lands.

These jihadis will need to be contained or ‘redeployed.’ It appears that one possibility is to redeploy them against Iran, using the extant Shia-Sunni rivalry, which in any case played a major role in the Syrian and Iraqi conflicts (and continues to devastate Yemen). The current US rhetoric against Iran, urged by its two best friends, Israel and Saudi Arabia, makes this clear. 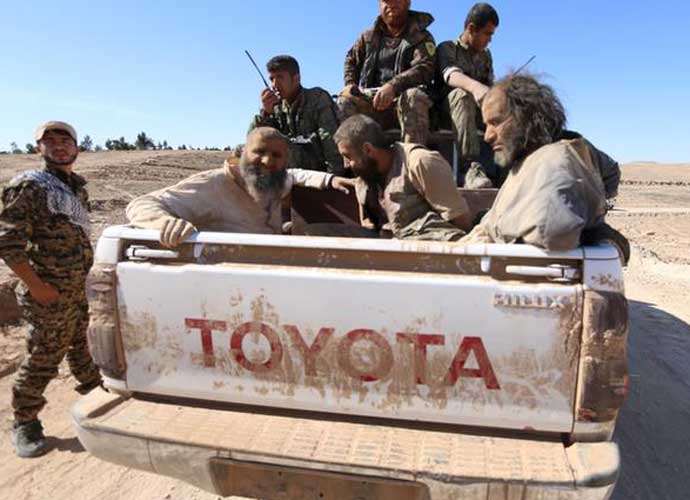 As these trained, defeated ISIS fighters exit Syria, where will they be released? (Photo: Reuters)

Obviously, the redeployment will involve the usual official and semi-official ‘actors’ in Pakistan, actors which the US services have patronised since at least as far back as the Soviet invasion of Afghanistan.

And just as obviously, the US — led by a President who thinks that Nepal is a state of India — is unlikely to realize, or even care, if these Pakistani actors ‘redeploy’ the jihadists against India as well.

The “strong condemnation” of the Pulwama attack by USA so facetiously being touted by the media does not essentially change all this, and it won’t, unless the US shows a far better understanding of what is happening in the region.

For that, it will have to think independently of its best friends, Israel and Saudi Arabia. Instead, India, as a regional power with global standing, needs to work out a full regional strategy involving like-minded people in all these countries, and particularly Iran, with which India shares a history, culture and languages. Persian, after all, is a sister language of Sanskrit.

This strategy has to be pan-regional, and largely shorn of US influence, because the US has a very limited understanding of ‘Islamic’ politics in the entire region and its interests do not coincide with those of India.

To start with, India needs to co-ordinate Iran and China (which, despite its Pakistani connections, is increasingly vulnerable to Islamist insurgency) into a multi-national discussion, instead of resting happy with easy US “condemnation” of the Pulwama attack.

Above all, India has to resist being used as a pawn in the confused American attempt to ‘punish’ either Iran or China.

#ISIS, #Pakistan, #Pulwama terrorist attack, #India-China Relations
The views and opinions expressed in this article are those of the authors and do not necessarily reflect the official policy or position of DailyO.in or the India Today Group. The writers are solely responsible for any claims arising out of the contents of this article.