Sonia sharpened her attacks on the Atal Bihari Vajpayee govt, while learning to choose her words cautiously. Rahul must learn this too, for his and his party's political survival now.

The Congress leadership issue is far from settled, leading to a lot of questions.

The immediate challenge is, however, to ensure that the grand old party speaks in one voice on the crucial issue of national security. Many Congress insiders fear that with differences of opinion on issues of leadership, economy and secularism, the party faces a real threat of division over its split vision of national security between left-of-centre members and more conservative sections of the party.

The divide was evident in the manner in which former party chief Rahul Gandhi responded to US President Donald Trump's recent claim that Prime Minister Narendra Modi had asked him to mediate on the Kashmir issue.

President Trump says PM Modi asked him to mediate between India & Pakistan on Kashmir! If true, PM Modi has betrayed India’s interests & 1972 Shimla Agreement.A weak Foreign Ministry denial won’t do. PM must tell the nation what transpired in the meeting between him & @POTUS

People on Twitter and Rahul's opponents cried hoarse, questioning the Wayanad MP's absence from the Lok Sabha, and his alleged attempts to undermine the Indian government on Kashmir while apparently sitting on foreign soil.

There were others who pointed out how Rahul has been devastatingly inconsistent about leftists, supporting and visiting Kanhaiya Kumar during the Jawaharlal Nehru University (JNU) crisis and then breaking the Left citadel in Kerala. From within the Congress, influential leaders questioned Tharoor's position, terming it as contrary to what Rahul was saying. Tharoor reportedly bowed to pressure when he clarified:

I did not say the PM didn't need to explain himself to Parliament, of which he is a member & to which he is accountable. On the contrary, while I'm prepared to believe it's impossible our PM could say this, he needs to clarify it himself in Parl, since Trump cited him personally. https://t.co/CvK4DtLp5U

Away from the public glare, there is a raging debate among Congress rank and file that the top leadership (in whichever form or shape it emerges) needs to tread on matters of national security with greater care and sensitivity — there has been no official document to state reasons for the 2019 Lok Sabha poll debacle but an informal consensus exists that the party's stand on Pulwama-Balakot and Rafale caused it immense damage, depriving the Congress even of an achievable number of 80 to 100 Lok Sabha seats.

Rahul, who fancies himself as the 'leader-at-large', needs to take an item or two from his mother Sonia Gandhi's survival kit.

When Sonia took over the Congress in 1998 and entered the Lok Sabha the subsequent year, she lacked both experience and confidence. Often, she became a soft target of the treasury benches. However, to her credit, each time she was challenged or humiliated by the Atal Bihari Vajpayee-led National Democratic Alliance (NDA) ruling coalition, Sonia prepared hard to get even. 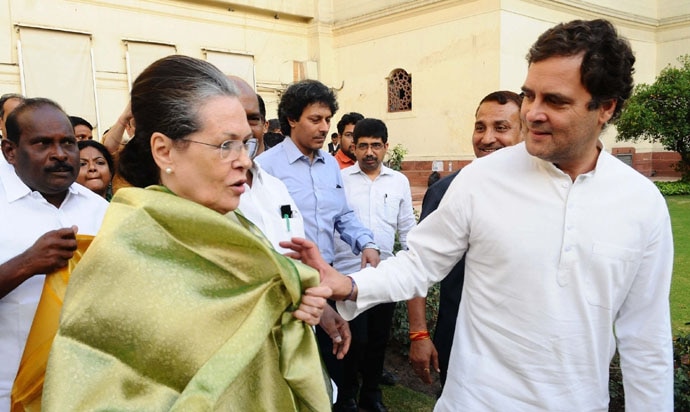 Carrying off political robes: Sonia Gandhi upped her game by constantly learning the tricks of the trade. (Photo: IANS)

For instance, when former PM Vajpayee taunted the Congress on the party's stand on the nuclear deterrent issue during the Winter Session of 2000, Sonia kept quiet, causing acute embarrassment to her own benches. In the next few months, she reportedly summoned experts on strategic studies, defence and nuclear issues, including those who were not part of the Congress think tank, to understand the nuances — and then went back to Parliament to speak on the subject.

Speaking in the Lok Sabha on March 12, 2001, a somewhat more confident Sonia asked Vajpayee, "Even on the nuclear doctrine, is there a clarity of vision? Last session, the honourable Prime Minister raised a laugh by challenging me to tell him what the Congress' policy was on the nuclear deterrent. I do not begrudge the Prime Minister that laugh, for he is, after all, one of the wittiest Parliamentarians in the last 50 years! But sir, we regard national security as far too important an issue to be settled by banter on the floor of the House. So let me throw the question back to the Prime Minister. What is the NDA government's nuclear doctrine? For the last 18 months, the recommendations of the National Security Advisory Board have been gathering dust. The three little words, 'minimum credible deterrent', do not amount to a policy. They have to be fleshed out; they have to be spelled out as a policy. When that is done, as a responsible Opposition we would react to it and if possible, shall lend support. But how can we, sir, lend support now? How can we support a policy that, as far as we know, does not exist," she asked, even as Vajpayee smiled benignly. On another occasion, during the motion of thanks to the President's address, Vajpayee objected to Sonia's description of the 2002 Gujarat riots as genocide. The Prime Minister had gently cautioned her against using strong words, pointing to possible international ramifications.

There has been a broad consensus on matters of foreign policy among successive governments and opposition in India. While the Modi regime needs to take the opposition, including the Congress, in confidence, Rahul needs to be cautious with words, particularly spoken from foreign soil.

There is no dearth of in-house foreign policy experts, ready to provide him quality advice and valuable inputs — moreover, this is one expectation from within the Congress that the leader-at-large should cut down his tweets and public statements until a new party leader is in place.