The Congress is reaching out to a range of caste groups. It will also ask all its top leaders to contest the Lok Sabha polls; Digivijaya Singh has reportedly said he will stand against PM Modi.

There is a flutter of activity in the Congress. A group of prominent Muslim leaders recently called on the party's president Rahul Gandhi, asking him to reach out to smaller castes, and caste-based parties in Uttar Pradesh to throw a credible challenge to the ruling BJP and Samajwadi Party-Bahujan Samaj Party combine.

A Muslim delegation, consisting of Jamiat-e-Ulema (Hind) leaders Maulana Mahmood and Arshad Madani, Hazrat Syed Mohammad Ashraf Kichhowchhwi, president and founder of the All India Ulama and Mashaikh Board of Barelvi sect and others, recently met Rahul Gandhi in the presence of AICC treasurer Ahmad Patel and Nadeem Javed, head of AICC’s minority department.

While Madanis are known to be sympathetic to the Congress, Ashraf Kichhowchhwi was instrumental in holding a World Sufi Meet in New Delhi in August 2015 that was addressed by Prime Minister Narendra Modi. Kichowchhawi had then told Modi how the “divisive politics of vote-banks” had resulted in the Muslim community interacting with the government only through intermediaries — and urged the Prime Minister to establish direct contact with Muslims of India. I hear you: Rahul Gandhi recently met a group of prominent Muslim leaders at the AICC's minority convention. (Photo: PTI)

During the course of their conversation with Rahul, Madanis and Kichhowchhwi told Rahul to look at Apna Dal, Suheldeo Bhartiya Samaj Party (SBSP), Nishad Party, Peace Party, Mahan Dal and others. There are many non-Yadav OBC voters who account for over double the Yadav population in Uttar Pradesh, such as Kurmis, Koeris, Lodhs, Jats and Sunars.

Among Dalits, Pasis and Valmikis are the large non-Jatav group. Then there are 17 other sub-castes — namely Kahar, Kashyap, Kewat, Nishad, Bind, Bhar, Prajapati, Rajbhar, Batham, Gauriya, Turha, Majhi, Mallah, Kumhar, Dheemar, Dheewar and Machhua. Individually, each may hold a very small vote share but together, they make up a significant chunk of votes, the Muslim delegation is said to have told Rahul.

In Uttar Pradesh, OBCs are estimated to be around 44% of the population while Dalits are approximately 21%, Muslims 19% and upper castes 16%.

Rahul said to have responded positively, pointing out that as the Congress president, his prime duty was to further the party’s interest but at the same time, as a responsible national leader, he is conscious of his “duties” to check the rise of communalism and accommodate legitimate political aspirations.

The Muslim leaders, favouring a greater bond among smaller caste groups and the Muslim community, are said to have told Rahul that these smaller parties may provide the Congress some good candidates for the May 2019 Lok Sabha polls. The Congress reportedly has 40 [category “A” ie high on winnability prospects] candidates and is on the lookout to find another 40 nominees for 80 Lok Sabha seats from Uttar Pradesh.

Significantly, from the Muslim side, some critical remarks were apparently made about both the Samajwadi Party and the Bahujan Samaj Party leadership — even as Rahul reportedly maintained a stoic silence. The Gandhi scion wants a credible challenge to both the ruling BJP and Samajwadi Party-Bahujan Samaj Party combine. (Photo: PTI)

At another level, the Congress plans to ask its all front-ranking leaders to contest the 2019 Lok Sabha polls. In 2014, some leaders, like Digvijaya Singh, Manish Tiwari and others, had opted out — but for 2019, there will be no exceptions of leaving out seniors from the fray.

Digvijaya Singh has reportedly been asked to contest either from Indore or Bhopal while Madhya Pradesh Chief Minister Kamal Nath’s son will be in the fray from the Chhindwara Parliamentary seat that has been represented by his father since 1980. 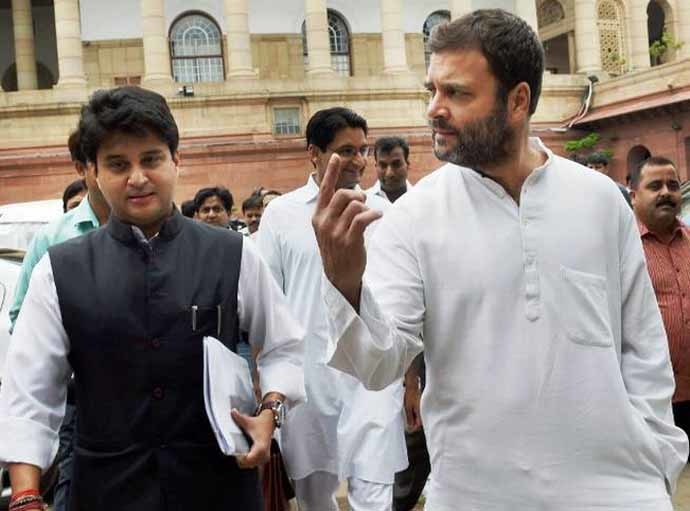 In charge of western UP himself, Jyotiraditya Scindia has reportedly been asked to field his wife from the Guna Parliamentary seat. (Photo: PTI)

Priyadarshani Scindia, who belongs to the erstwhile Gaikwad royal family, plans to camp in the Guna-Shivpuri region between February 18-26, giving rise to speculation that she is indeed planning to contest the coming Lok Sabha polls.

Scindia got married to Priyadarshini in 1994. It is said that when he met the princess from Baroda for the first time, he was smitten by Priyadarshini’s charm. In her, Scindia found a life partner who is a new-age woman, one who also greatly values traditions and family.

Meanwhile, the Congress is on the lookout for a new party chief for Uttar Pradesh where actor Raj Babbar has tendered his resignation. The current thinking in the party is to have two state heads, one for eastern Uttar Pradesh and the other for the western region of the country’s most populous and politically significant state.

Post your comment
#Muslim vote, #BJP, #Congress, #Democracy
The views and opinions expressed in this article are those of the authors and do not necessarily reflect the official policy or position of DailyO.in or the India Today Group. The writers are solely responsible for any claims arising out of the contents of this article.