Ashok Gehlot has alleged that the BJP is offering Rs 10 crore in advance to MLAs to not vote for two Congress candidates, with another Rs 15 crore to be given later.

Just when it appeared that Chief Minister Ashok Gehlot is comfortably running the Congress government in the state, he has accused the BJP of conspiring to topple his government ahead of the Rajya Sabha polls on June 19.

Gehlot went on allege that the BJP was offering Rs 10 crore in advance to MLAs to not vote for two Congress candidates, with another Rs 15 crore to be given later. Gehlot also had his party Chief Whip Mahesh Joshi lodge a complaint with the Anti-Corruption Bureau and the Special Operation Group, alleging that certain transactions to buy MLAs have already taken place. As per the numbers, the Congress could easily win two and it fielded KC Venugopal and Neeraj Dangi. The BJP could win one but it fielded Onkar Singh Lakawat at the last moment, having fielded Rajendra Gehlot initially. 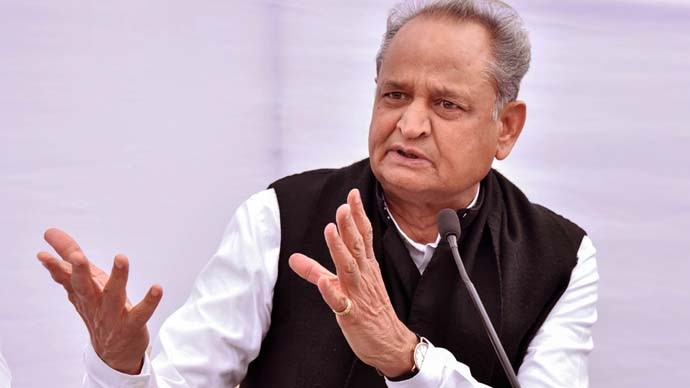 Chief Minister Ashok Gehlot has accused the BJP of conspiring to topple his government ahead of the Rajya Sabha polls on June 19. (Photo: PTI)

Gehlot had raised suspicions on horse-trading in March, when the Election Commission postponed the Rajya Sabha polls two days before polling date of March 26, citing the lockdown. Sachin Pilot, deputy chief minister and PCC president had then justified deferring the polls and has denied any knowledge about BJP attempts to buy MLAs. He said there was nothing unusual in opposition fielding a candidate and try cross-voting even when defeat was certain. But Gehlot, who has almost his entire flock of Congress and independent MLAs locked in a hotel, wants to take no chances, citing the Bharatiya Janata Party pulling down Congress governments in Karnataka and Madhya Pradesh.

Bharatiya Janata Party state president Satish Poonia has accused Gehlot of staging a drama to tap telephones of party leaders through government agencies on the pretext of probing horse-trading.

#BJP, #Horse-Trading, #Rajasthan cm ashok gehlot, #Rajyasabhapolls
The views and opinions expressed in this article are those of the authors and do not necessarily reflect the official policy or position of DailyO.in or the India Today Group. The writers are solely responsible for any claims arising out of the contents of this article.