Rajasthan election results: Both Pilot, Gehlot have strong claims to be CM, but one has a clear advantage

Rahul Gandhi will have a tough time choosing between Ashok Gehlot and Sachin Pilot.

As Congress looks set to claim back the Rajasthan crown, the party now has the difficult task of deciding whose head to put it on —  Sachin Pilot or Ashok Gehlot?

Both have strong claims to the top post, both have dedicated camps within the party, and with hope finally blooming ahead of the 2019 Lok Sabha polls, the Congress can ill-afford to antagonise either.

So, whom should Congress president Rahul Gandhi choose as the new chief minister of Rajasthan? 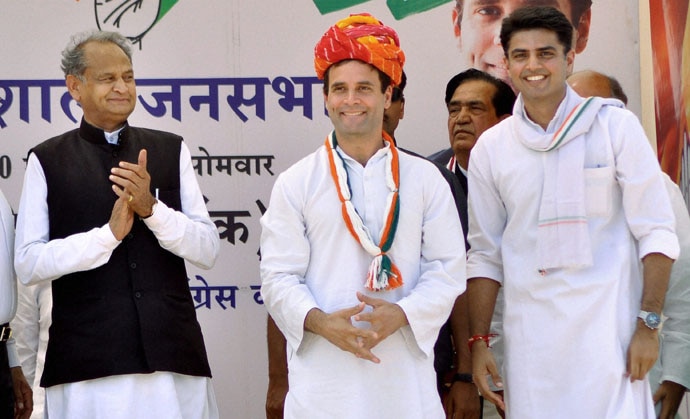 If Congress wins Rajasthan, Rahul Gandhi will have a pretty problem of plenty. (Photo: PTI)

In many ways, Gehlot signifies what the grand old party has always been, and Pilot what it needs to become. Gehlot is the old, wily warhorse — with distinct flaws, but too important to ignore. Pilot is young, energetic, eager to get things done, and willing to go the extra mile for it.

Gehlot has been chief minister of Rajasthan twice. In his tenure, he had introduced many social welfare schemes, which the poorer sections of the state still remember. In his long political innings, he has cultivated alliances and contacts, which do their bit for the party when called on.

Yet, it was after Gehlot’s tenure in power that the Congress suffered its worst defeat in the state in 2013, reduced to 21 out of 200 seats.

It was after this that Sachin Pilot was appointed the Rajasthan Congress chief.

Pilot was the corporate affairs minister in then-Prime Minister Manmohan Singh’s cabinet, and continued on the post despite the new responsibility.

In the 2014 Lok Sabha polls, Congress was routed in Rajasthan, failing to win even one out of 25 seats. Pilot, the sitting MP from Ajmer, was defeated by a margin of over one lakh votes.

The young former MP seemed to have learnt his lesson. He shifted base to Rajasthan, and over the past four years, worked hard, re-building the party, visiting each one of the state’s constituencies personally more than once.

Also, he has been relentless in his attacks on the BJP government, not letting go of any issue to corner CM Vasundhara Raje — from farmers’ distress to unemployment to corruption. While Pilot’s incessant hammering kept these issues in the public’s mind, the sight of their leader leaving the BJP gasping galvanised the party cadre. 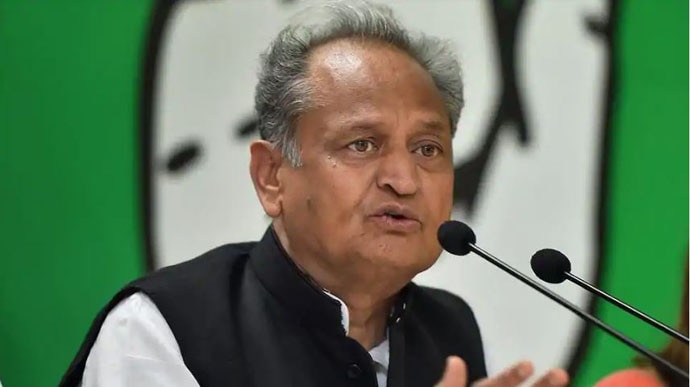 Gehlot was the Congress’ poll in-charge in Gujarat, and the party managed to give the BJP a tough fight in the PM's home state. (Photo: PTI/file)

Even in the current polls, while Gehlot fought from his bastion of Sardarpura, Pilot was given a new seat of Tonk, and won, despite the BJP fielding Yoonus Khan — its only Muslim candidate — from the Muslim-dominated constituency.

Yet, Gehlot’s experience and contributions cannot be discounted. He was the Congress’ poll in-charge in Gujarat, and the party managed to give the BJP a tough fight in the PM’s home state. In Karnataka too, he was by Rahul Gandhi’s side, giving advice and helping strategise.

In Rajasthan, if the Congress fails to win a clear majority, Gehlot’s role will become very important — he is the best man to forge alliances, and later, manage allies.

In the run-up to the polls, the Pilot-Gehlot rivalry was like a ticking bomb the party always had one wary eye on.

However, the two leaders managed to work shoulder-to-shoulder.

But even here, Pilot was more graceful and statesman-like. He either did not respond to Gehlot’s taunts, or was dignified in his responses. Despite Tonk not being a walkover for Pilot, Gehlot did not turn up to campaign for him even once, like he did for other Congress candidates.

Pilot is a Gujjar, Gehlot belongs to the backward Mali caste. Favouring Pilot can anger the non-Gujjar dominant castes, while Gehlot’s caste is less polarising. 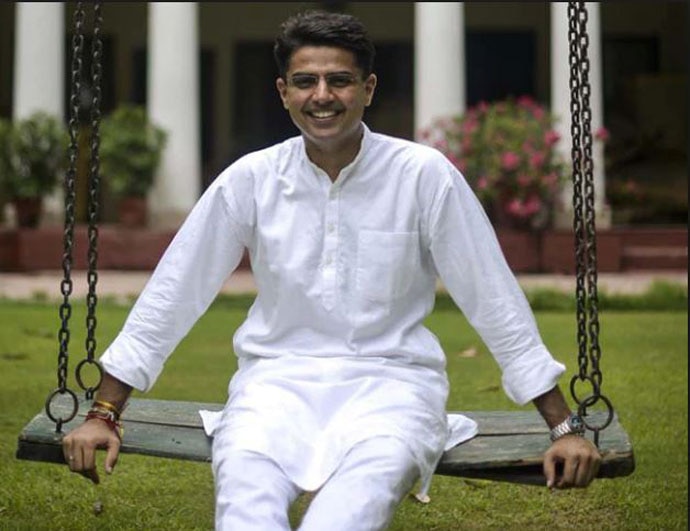 As results come in, the Congress has much to thank Sachin Pilot for. (Photo: India Today/file)

However, the time has come for the Congress to choose between the old and new. For long, the party enjoyed dominance because it was favoured by the very poor, and the elite. Gehlot represents that era. But between 2004 and 2014, as the UPA became more disconnected with voters, a new class became significant — young, aspirational, not very rooted in the past, impatient for a future. It is this class that enthusiastically backs the BJP, and which the Congress desperately needs to win over.

To appeal to this segment, Pilot would be the best bet. Although a dynast — son of Congress leaders Rajesh and Rama Pilot — Pilot owes his present success to four years of hard work. He is young, suave, and an officer in the Territorial Army.

Also, a party long bedeviled by scheming seniors who have the top boss’s ear needs to be seen rewarding a young, dedicated worker, to incentivise other young leaders.

Rahul Gandhi’s choices today will have a bearing in 2019 for the Congress, and for the nation.