The incumbent CM did not have many backers, including apparently her own party. But Raje is not Rani for nothing.

If the BJP loses Rajasthan today — and all trends point to that — the defeat, we will be told, will be Vasundhara Raje’s. PM Modi, the BJP, the central government, the party’s policies, all remain popular, we’ll be told over and over, it was anti-incumbency against the chief minister that did the party in.

These claims will be false.

Rajasthan has always had a ‘revolving door’ political system — the incumbent always loses. But this time, the state is witnessing a close fight. Congress is temptingly close to a clear majority, but a BJP+allies coming to power is still a possibility, at least numerically. And the credit of turning a lost battle into a spirited fight goes to Raje. And Raje alone. 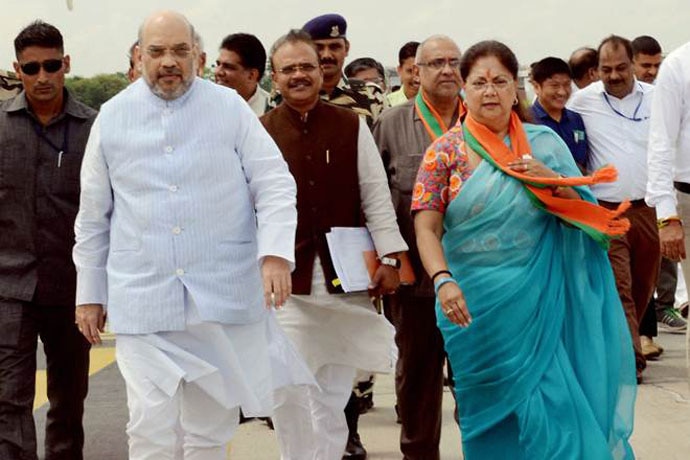 Separate ways? For a long time, Raje and Amit Shah did not even share a stage for campaign rallies. (Photo: PTI/file)

Dark clouds were looming over the BJP in Rajasthan since early this year, especially after it lost three crucial by-polls to the Congress in January.

Yet, the party that is known to not take any defeat lightly left the CM of an important state pretty much to her own devices.

It was Raje, who, through her ‘gaurav yatras’, put the BJP back in the game. A common complaint against Raje was that she was apparently inaccessible, even to party workers, who would be unable to meet her. Even if rather late, the CM corrected course and went out herself to meet people, touring region after region, holding rallies.

At one such rally in Jaisalmer, she was shown black flags by Karni Sena youths. Raje responded with: “These black flags do not bother me, they work as kala teeka and are auspicious.”

Raje has needed this grit and spirit, to tackle opposition not just outside but even within her own party.

It is no secret that in a BJP that wishes to keep every leader a head shorter than PM Narendra Modi and party chief Amit Shah, leaders like Raje — with a mind, and a vote bank, of their own — are not exactly court favourites.

In Rajasthan, this was apparent.

Reports of disagreements between Raje and Amit Shah were not uncommon — one such drama that played out for long was over the selection of the state party chief. Madanlal Saini, prone to gaffes and embarrassing remarks, was reportedly a ‘compromise candidate’.

Even after Amit Shah began campaigning in Rajasthan, he shared a stage with Raje after a full two weeks. Shah’s Shakti Sammelan Kendras in the other states going to polls had seen him and the chief ministers campaign together. In Rajasthan, Raje and Shah held separate rallies for days.

Was this to strongly demarcate Raje from the rest of the BJP in case of a defeat? 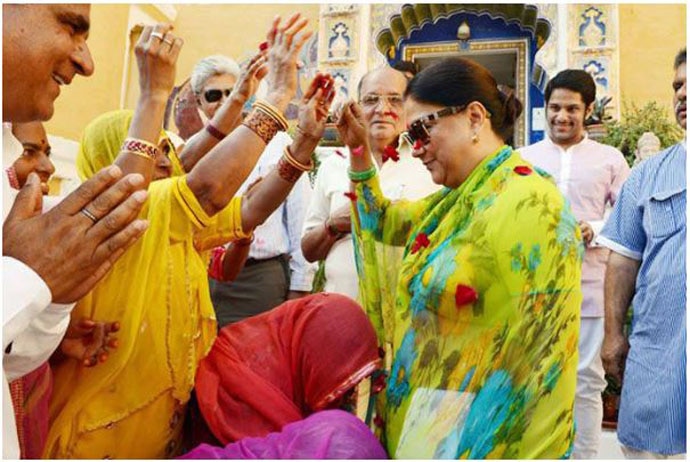 There's a reason she is called Rani. (Photo: India Today)

There were indications of careful efforts being made to pin a possible loss directly on Raje.

A popular slogan doing the rounds ahead of the elections was apparently ‘Modi, tujhse bair nahin, Rani, teri khair nahin’. The fact that the Opposition camp would obviously not come up with a slogan endorsing the PM, and the BJP social media team’s enviable talent in making things go ‘viral’, set tongues wagging that it was the work of sections within the BJP.

Another significant factor is the RSS reportedly being none too fond of Raje. The BJP’s electoral victories depend a lot on the groundwork done by the RSS cadre, with its formidable network. But, in Rajasthan, the RSS swung into action only around November — reportedly only after they heard the Congress was planning to ‘ban’ RSS shakhas (it was not) in Madhya Pradesh.

Raje packs in a lot of personal appeal. She has an enviable identity combination — Maratha-Rajput royal daughter, Jat royal daughter-in-law, Gujjar mother-in-law. Her electoral record is even more impressive — she was the Jhalawar MP for five terms, and has been the Jhalrapatan MLA since 2003, winning every election with a bigger margin. Not only does she have a dedicated band of loyalists within the party, she has a strong connect with voters in the state too, especially women. Some of her social welfare schemes, such as the Bhamashah Yojana, struck a chord with the electorate.

It was for a reason that Raje lead the BJP to its biggest-ever victory in Rajasthan in 2013, winning 164 out of 200 seats.

This time around, even as she loses, Raje is going down all flags flying. This is not her loss. It is the BJP's.