Ayodhya verdict: How the Supreme Court arrived at the decision

In a religious and political flashpoint that has cast a shadow on the country for decades, the Supreme Court of India, in an unanimous verdict, directed that the disputed 2.77-acre site in Ayodhya be given to a government-run trust for the building of a temple and a five-acre plot at a "prominent site" will be given for a mosque.

The Sunni Waqf Board would get the alternative plot from either the state or the central government, the court further said.

The verdict pronounced by a five-judge bench follows almost a century-old legal wrangle over land in Ayodhya where the 16th century Babri Masjid stood. The mosque was demolished by Hindu activists, who believe it is the birthplace of Lord Ram, on December 6, 1992.

In the riots that followed across the country, over 3,000 people were killed.

The Supreme Court began continuous hearing in the matter on August 6 this year, after the translation of manuscripts in English for over eight years.

The apex court based its verdict on the report filed by the Archaeological Survey of India (ASI), saying the land dispute should be decided on evidence. "Title cannot be established based on faith and belief. Whether a belief is justified is beyond judicial inquiry. Once a faith is established, courts should defer to it," the court said.

The ASI report had noted that though an older structure existed below the disputed building, it could not be said if it had been constructed after demolishing the structure. But the Supreme Court said the underlying structure was not Islamic.

The court said that as per evidence before 1857, there was no exclusion of Hindus from worshipping at the site. The outer courtyard became a focal point of worshipping by Hindus, for which they have been able to establish unimpeded possession, the court observed.

The court said, Muslims have not brought evidence to show possession. There is also no evidence to show the offering of namaz was to the exclusion of Hindus, it added. The court also said evidence does not indicate the inner courtyard was abandoned by the Muslims.

The Supreme Court held that it is beyond its jurisdiction to decide if the faith of the Hindus was valid or not, but their belief that Lord Ram was born under the central dome has been proven genuine.

Saturday’s directive came while deciding on the September 2010 ruling of the Allahabad High Court that had directed a three-way partition of the disputed land. 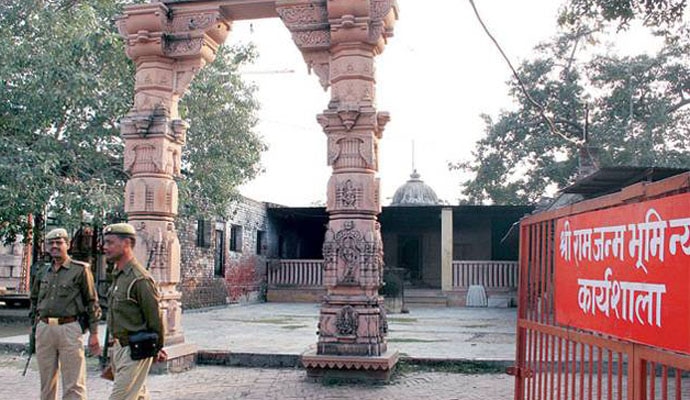 The court order said the disputed 2.77-acre site in Ayodhya be given to a government-run trust for the building of a temple. (Source: India Today)

A mediation effort by a court-appointed panel was initiated before the continuous hearings began on August 6. Led by Justice (retd) Fakkir Mohamed Ibrahim Kalifulla, the panel informed the apex court in July that the process was unsuccessful.

However, mediation once again resumed in September after some parties expressed willingness to go the mediation way. In October, a mediation report was submitted, but key Hindu and Muslim parties later said they were not a part of it.

This wasn’t however the first attempt at mediation that failed. In the dispute that is now over a century old, several attempts were made to settle it by arriving at a consensus decision.

What happened at Allahabad High Court

Justice Sibghat Ullah Khan, Justice Sudhir Agarwal and Justice Dharam Veer Sharma had held that the three parties to the dispute, the Nirmohi Akhara and Ram Lalla Virajman, the deity installed at the site and seen as a juristic entity — and the Sunni Waqf Board — were in joint possession of the disputed land in Ayodhya and had directed a three-way partition.

All three sides had refused to accept the trifurcation.

The argument put forth by the Hindu side was that it was always in the possession of the land and was displaced only in 1949 when the site was sealed and attached by the Faizabad district magistrate. They argued that a mosque was built by emperor Babur by demolishing a temple. The Muslim side argued that the mosque was built in 1528 by Babur’s commander Mir Baqi, who dedicated it as Sunni Waqf property, the side that has claimed to be in possession of the site since then.

Justices Khan and Agarwal said that there wasn’t enough evidence to establish either claim.

The Muslim side has contended that idols and objects of worship were placed on the night of December 22-23, 1949. The three judges differed on this.

Has the dispute been settled?

The All India Muslim Personal Law Board (AIMPLB) said Saturday it was not satisfied with the Supreme Court judgment on the Ram Janmabhoomi title suit. The board added that it would evaluate legal options, like filing a review petition.

But given that the verdict is a unanimous one, the chances of it getting reversed are slim.