The RSS and BJP's blueprint of a new nationalism for 2019

Stories about the Bharatiya Janata Party (BJP) are rarely complete without a mention of its ideological parent, the Rashtriya Swayamsevak Sangh (RSS). The RSS calls itself a social organisation distinct from its political wing, the BJP. This is a dualism almost without parallel in world politics.

Where the interests of the two have converged of late is in the election arena. A decisive electoral push by the RSS and its cadre, the first since 1977, was one of the factors that enabled the BJP to surge to power in 2014.

Since then, Sangh leaders have occasionally voiced the RSS' disagreements with the Narendra Modi government's style of functioning and its economic policies, including the sale of Air India and the implementation of the Goods and Services Tax.

These differences, however, have not led to a split between the party and the parent organisation, as they did during the Atal Bihari Vajpayee government. If anything, the RSS and BJP are now locked in a symbiotic embrace. The RSS provides cadres for the BJP's political machinery, helping break new electoral ground, like it did earlier this year in Tripura where hundreds of its cadre descended on and captured a bastion held by the CPI(M) for over two decades.

The Sangh, for its part, has been rewarded with a spike in its membership after the BJP came to power at the Centre. The Opposition has been quick to sense this growing closeness and this explains the recent attacks by Congress president Rahul Gandhi on the RSS. 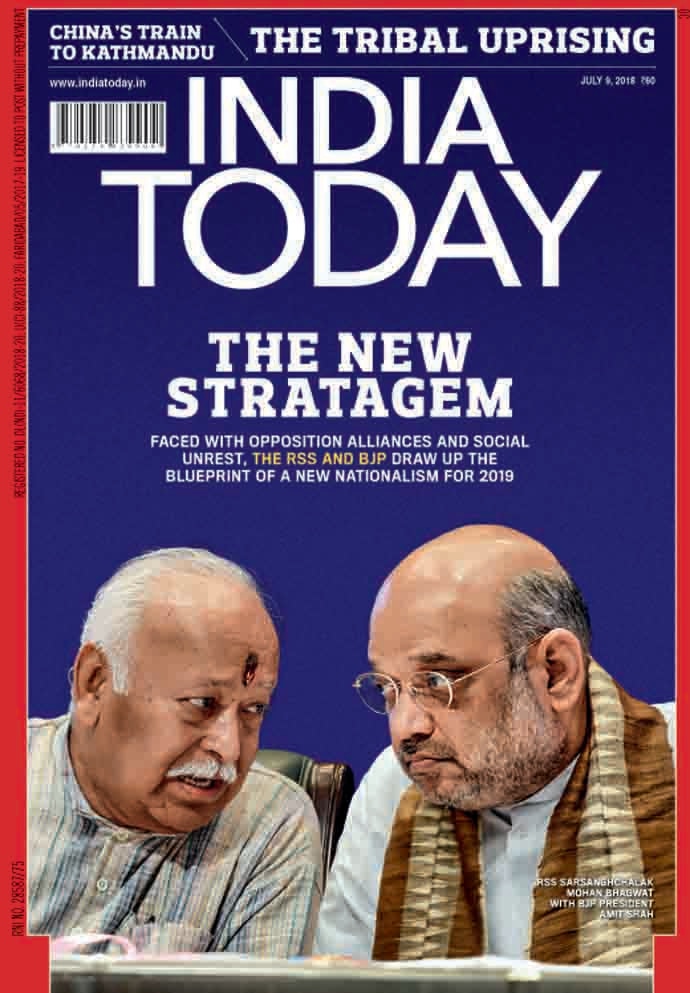 We have closely tracked the RSS and its relationship with the party and the government over the past four years through four cover stories. The Sangh is itself in the throes of change as it mainstreams its appeal. This ranges from the sartorial — opting for trousers — to the pragmatic -attracting a younger demographic, dropping its insistence on daily meetings to give members a choice of weekly and monthly meetings. Its outreach campaign saw veteran Congressman and former president Pranab Mukherjee address its ranks on June 7.

The Sangh may have had a role in persuading the BJP to undertake a similar public outreach, with party leaders fanning out across the country to engage with known detractors.

Now, with the next general elections less than a year away and at least some of the sheen around the BJP's chief campaigner, Narendra Modi, wearing off following a string of by-poll defeats, the RSS has sounded the bugle for its estimated 5 million-strong followers. The message is clear: They have to put their shoulder behind the electoral wheel to ensure the Modi government's re-election.

In 2014, if RSS chief Mohan Bhagwat railed against the UPA's failings on social, economic and security issues, the rallying cry for both the RSS and the BJP this time around, unsurprisingly, is nationalism. With the Sangh and the BJP closing ranks as an electoral machine, our cover story, put together by deputy rditor Uday Mahurkar - who has tracked the RSS for decades - and senior associate editor Kaushik Deka, analyses what lies at the core of this joint narrative.

Both the RSS and the BJP believe that the sporadic protests erupting across the country are being fuelled by anti-national elements whose main aim is to destabilise the Modi government and prevent it from coming to power for a second term. This us-versus-them narrative aims to take on not only the combined might of the united Opposition but also fix the rupture within what the Sangh sees as the Hindu Undivided Family - the alienation of tribals and Dalits.

It is not only Modi who needs the RSS. The RSS leadership believes the future of the Sangh Parivar hinges on whether or not the BJP will be able to retain power at the Centre. The battle is no more electoral, it is an ideological one as well.