How to make a Congress President: What Shashi Tharoor should know about the Congress Working Committee

Tharoor apparently asserts that the CWC can't decide the next party president as it's not an elected body. But over the years, the CWC made crucial decisions on the Congress leadership.

Shashi Tharoor and Captain Amarinder Singh's concern for drift and delay over the Congress leadership issue is spot-on — but their prescription for a course correction is erroneous.

If the Tharoor-Singh duo is really serious about arresting drift and inertia in the grand old party, they should swiftly start a signature campaign to requisition an All India Congress Committee (AICC) session.

The AICC alone has the gravitas, heft — and legal sanction — to dissolve the Congress Working Committee (CWC) and usher in some semblance of inner-party democracy. Look Back A Bit: The Tharoor-Singh duo is right in talking about Congress' crisis. But they should know the party history. (Photo: IANS/India Today)

In his recent interviews with media organisations, Tharoor asserted that the CWC was incapable of deciding the next president as it was not an elected body.

Both factually and politically, it is a wrong formulation.

Since 1991, most CWCs have been handpicked by successive AICC chiefs — PV Narasimha Rao, Sitaram Kesri, Sonia and Rahul Gandhi. Even when AICC delegates elected genuine CWC members at Tirupati, Rao, in 1991, juggled things to turn elected CWC nominees into nominated and vice versa. In Kesri's case, the wily politician drafted in Dr Manmohan Singh, PA Sangma, Rajesh Pilot and others to keep the Calcutta panel of 1997 under check.

There are enough provisions in the Congress constitution that authorise the Congress president to usurp powers given to the Congress Parliamentary Board (a defunct body since 1991), the CWC and other formal institutions. In other words, the nominated or handpicked CWC has as much legitimacy and sanctity as an elected body.

On March 14, 1998, 24, Akbar Road in New Delhi was witness to a constitutional coup that saw the rather unsavoury exit of an 'elected' Congress president and the appointment of Sonia Gandhi as party chief. Kesri, then 79, had arrived at the CWC meeting at 24, Akbar Road, convinced that a party president could not be forced out. He did not know that before the 11 AM meeting, most CWC members had gathered at Pranab Mukherjee's house to endorse two crucial statements.

The first was an ultimatum asking Kesri to step down; the second, a resolution replacing him with Sonia Gandhi. Swept Away: 24, Akbar Road has been witness to many sharp political coups. (Photo: India Today)

In 1959 too, the CWC was instrumental in making Indira Gandhi party president for a year when father Jawaharlal Nehru was Prime Minister — Nehru had, in fact, feigned ignorance about the development and later lamented that as a Prime Minister, it was not a great idea to face the Congress president every morning at breakfast.

Indira did a hit job paving the way for the dismissal of EMS Namboodiripad's first democratically elected Left government in Kerala. The Namboodiripad regime had initiated sweeping land reforms and introduced an educational bill regulating and controlling a plethora of privately run schools, upsetting influential bodies like the Christian Church, the Muslim League and the Nair Service Society, the unease soon developing into a mass movement for the removal of the Namboodiripad government.

Tharoor also needs to be reminded of the haste at which a new Congress president was appointed hours after Indira Gandhi's assassination on October 31, 1984.

Rajiv's swearing-in was so dramatic that a fourth generation Nehru-Gandhi family member taking over as head of the Congress was lost in the din — there was not even a formal meeting of the CWC. A meeting of party general secretaries was, however, held on October 31 evening at 24, Akbar Road that passed a condolence resolution, recalling Indira's services where veteran Kamlapati Tripathi proposed Rajiv's name. The event failed to even figure in the next day's newspapers but found a mention in the annual general secretary's report that was presented at the Congress Centenary Session at Brabourne Stadium, Mumbai, on December 28, 1985.

Tharoor was perhaps not in New Delhi on May 22, 1991, when 18 hours after Rajiv Gandhi's assassination, the CWC met at 24, Akbar Road.

Eighteen CWC members, including four permanent members, and two special invitees, sat cross-legged on a white sheet, reclining on masnads. Rao, who was not even a member of the CWC then, was to chair the meet and the place meant for the party president was kept vacant as a mark of respect for Rajiv. Grim-faced K Karunakaran, Arjun Singh, Ghulam Nabi Azad, Balram Jakhar, Meira Kumar, Jagannath Pahadia, Rajendra Kumari Bajpai, HKL Bhagat, Buta Singh, Ram Chandra Vikal, Sitaram Kesri, Sharad Pawar, Pranab Mukherjee, Jitendra Prasada, ML Fotedar, Janardhan Reddy and P Shiv Shankar chose Sonia as party chief — even though Rajiv's widow was not even a member of the Congress. 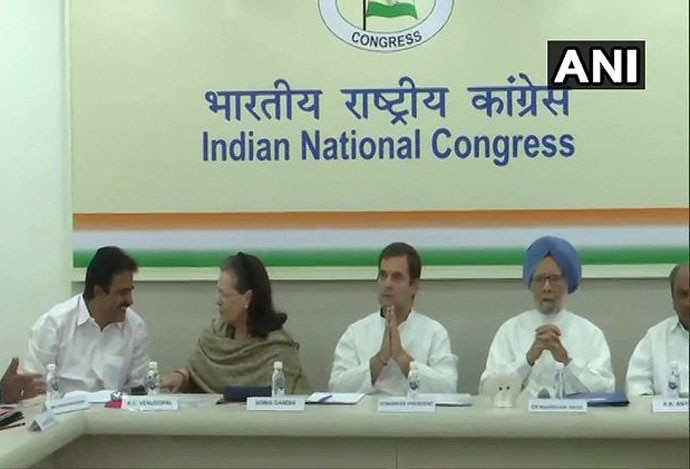 It only looks calm: The powerful CWC has wrought several crucial changes in the Congress over the years. (Photo: ANI)

For the benefit of Tharoor and young readers, it is worth reproducing what I saw as a young reporter then.

Mukherjee broke the news about Sonia's selection to the media. The seasoned politician faced a hostile press even though Mukherjee kept parroting, "She is the only person who will be able to provide leadership at this juncture and under her leadership, the future of the Congress is bright."

When Mukherjee was asked how the CWC had chosen a leader who was not even an Indian citizen until 1983, Mukherjee replied, "She is an Indian housewife who has been exercising franchise in the New Delhi constituency."

Much like the would-be Bharat Ratna's classy performance of May 1991, cerebral Tharoor and Captain Amarinder Singh are busy raising the bogey of Priyanka Gandhi as Rahul's successor, fully aware that this is not how the Gandhis like to function. After all, Narendra Modi's 'naamdar versus kaamdar' jibe has badly stung the Congress and the Gandhis, prompting Rahul to take moral and political responsibility for the 2019 poll debacle.

Tharoor and Singh are positioning themselves as future Pranab Mukherjees or men for all seasons. Both are aware that despite their illustrious careers and achievements, they are kind of outsiders in the Congress parivar where family retainers and time-servers have wielded power at will. Would this sort of posturing consolidate their position even if someone other than a member of the Nehru-Gandhi family takes over?

It is intriguing to note that virtually nobody in the Congress is looking at the role of a principal dissident leader within the Congress — a role that is begging for rewards and promise.