Up, close and personal: From a college student receiving an award from the CM to a reporter tracking Sheila Dikshit

A life well-lived is not only about victories. It's also about the fights.

The first time I interacted with Sheila Dikshit, it was 2007. I was a beaming college student shaking hands with the Delhi chief minister.

It was a special occasion for the students at the girls' college in Delhi University to watch a woman CM walk down the corridor.

The institution was to bestow special honours on her and I was rewarded for excellence in student theatre. Dikshit handed the trophy with her usual, affable 'grandma' smile.

I do not remember snippets from her speech but vividly remember girls cheering for the woman at the helm of the national capital's elected government.

Fortunately, a handshake and visual memory would not be the only encounter I associate with her.

My career provided several opportunities to meet, question and spend time with Sheila Dikshit. Each interaction incorporated the same tone and demeanour — graceful and empathetic. Never loud or shrewd. Often, firm and finesse.

However, between 2007 and 2019, once a jovial chief minister started to turn irritable and frail in her final days.

Tumultuous changes and daily requirements eventually started to take a toll on her interactions. 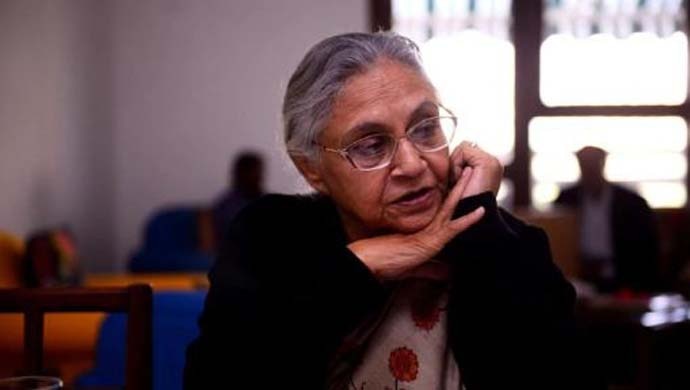 You never needed prior discussion with her to ask 'tough' questions. If she didn't want to reply, she would just dismiss. (Photo: Getty Images)

During Dikshit's tenure, a reporter could walk straight to the doorstep of the chief minister's chamber. Not a possibility, anymore.

Critical questions could be posed to her without any prior discussion. To avoid an answer, a slight snub was conveyed with a pat on the cheek of a young reporter.

An elaborate answer, meanwhile, was crisp and quotable.

Questions could range from law and order, a criminal case or an attack from the opposition but she — almost always — retained her composure. No reporter remembers personal tirades launched against them for asking a ‘tough’ question, a quality worthy of appreciation in testing times.

Married to an IAS officer, Vinod Dikshit, she understood bureaucracy from close quarters. Her political expertise came from her father-in-law, Uma Shankar Dikshit, a reputed figure in Congress circles.

Dikshit understood governance and relied heavily on bureaucrats. Despite the Delhi government and the Lieutenant Governor's office walking a tightrope, theatrics were restricted indoors. The national capital transformed with new roads and flyovers; swanky buses plied on Delhi streets. Delhi transformed with new roads and flyovers despite the government and the L-G office walking a tightrope. (Photo: Reuters)

My shift from print media to TV coincided with the Commonwealth Games 2010. The celebration of the grandeur brought serious charges of corruption against the Dikshit-led government.

The reports of the Comptroller and Auditor General (CAG), Shunglu Committee and Central Vigilance Commisson (CVC) highlighted gross administrative mismanagement and alleged irregularities towards private companies. Both the BJP and the Aam Aadmi Party (AAP) accused her (and her government) of swindling crores of rupees.

Kejriwal versus Dikshit will be remembered as a historic political fight in India. An experienced politician dethroned by a debutant activist in 2013. It appeared that Dikshit's career was over. Appointed as Governor of Kerala, off-and-on call for duties across Delhi and UP, she was no more at the forefront.

In 2019, the Congress leadership, in a surprise move, asked Dikshit to fight in the Lok Sabha election from North East Delhi constituency against BJP's Manoj Tiwari — a proof that at 81, Dikshit was still in demand and intended to fight.

A flurry of activities returned to her residence.

"Did you eat breakfast?" she asked reporters landing at her house early morning.

Her morning meals usually began with a bowl of fruits, a plate of which was also offered to waiting media persons. Most interviews were held during breakfast before people started to crowd around. After a lull, she was again brought back to prominence during the Lok Sabha elections because the Delhi Congress needed her. (Photo: India Today)

Our last interaction was also her final election — Lok Sabha 2019. She was a little hesitant but fought with dignity.

Sheila Dikshit vehemently opposed an alliance with the AAP, despite a few other Congress leaders and Arvind Kejriwal being eager to stitch it together.

"We are a grand old party. Congress has won elections in the past. Haven't we? We have also lost. So, what?" she said.

Reports of her arrogance floated. More rumours were fuelled of her ailing health and age, especially after a visit to France for surgery.

I noticed she had started to face difficulty in hearing. Sometimes, she asked me to repeat the questions. Her pace had slowed and padyatras were no more an option.

Despite all this, she fought.

Our final meeting was barely two months ago — in May 2019.

“I adore people. I get my inspiration from them. Heat does not bother me,” she said to me while campaigning in 40-degree celsius in her constituency.

Dikshit was irritated as most journalists asked similar questions on her age and demographic factors. She felt as if her experience was being brushed away. She saw this as a dismissing attempt even before the race had begun.

"People change. Their aspirations evolve. You have to adapt to people of that time. I cannot think I contested and won 20 years ago and it's the same. No, it is not. People want a society that provides good quality, not divides on meaningless grounds. What is the track record of the other two candidates? I have won many elections," she said.

She fought, indeed — for her party and for herself. Above all, her fight represented resilience to many young women waiting to explore public life.

Goodbye, Ms Dikshit. I shall remember you as a leader, who fought with grace and empathy. The woman who showed her opponents that a life well-lived isn't always reflected by the bugles of victory, but often by a resolute fight.

Also Read: When Sheila Dikshit said to me, ‘I know you. I have seen you on news channels’

#Lok Sabha elections 2019, #Congress, #Delhi, #Sheila Dikshit
The views and opinions expressed in this article are those of the authors and do not necessarily reflect the official policy or position of DailyO.in or the India Today Group. The writers are solely responsible for any claims arising out of the contents of this article.