BJP rode Sena all the way to Mantralaya, Sena wants a ride back

Shiv Sena giving a tough time to BJP is a compulsion. The party would be wiped out if it follows coalition dharma - whatever that actually means.

Indian elections do not like being dull. All dull contests have interesting results, all expected results are preceded by fiery campaigns. All of this is in turn preceded by significant political crossovers. And all of this is followed by horse trading, poaching and farmhouse stays for elected legislators.

In Haryana, the contest was made interesting by Dushyant Chautala's Jannayak Janata Party (JJP) cornering 10 seats in the 90-member Assembly and for a moment making it seem like the Congress could do what the party itself didn't fathom was possible.

With Haryana settled, it is Maharashtra that is trying to make up for the news space that it didn't get during the campaigning phase. Everyone thought BJP-Shiv Sena was coming to power with Devendra Fadnavis as chief minister until Shiv Sena decided to dig in its heels quite literally on Amit Shah's foot. 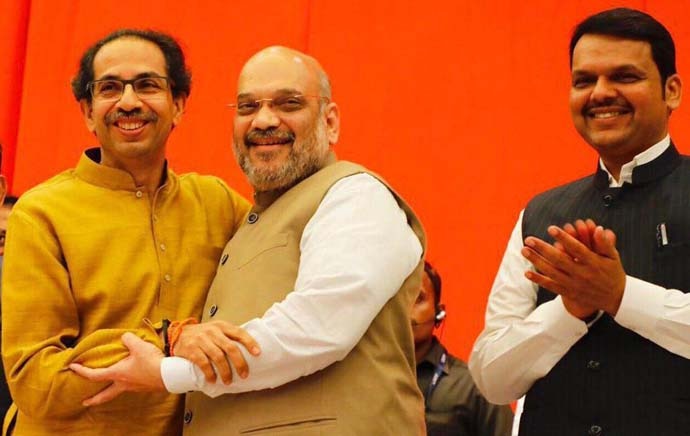 The Shiv Sena is firmly holding its ground on the demand of a 50:50 sharing of the chief ministership with the BJP. (Photo: Reuters)

Shiv Sena is firmly holding its ground on the demand of a 50:50 sharing of the chief ministership with the BJP. Sena chief Uddhav Thackeray has smelt the opportunity of fulfilling the promise he made to his father Bal Thackeray — a Shiv Sena chief minister for Maharashtra. Shiv Sena leader Sanjay Raut is ensuring that Uddhav doesn't let his late father down.

This could all be posturing for a greater share of the pie when the cabinet berth allocations take place.

After endless bickering, the BJP and the Shiv Sena fought the Maharashtra Assembly election together with a 164-124 seat-sharing formula. The BJP won 105 seats, the Shiv Sena 56. Now, those pushing the argument that Shiv Sena is behaving like an opportunist miss the point that deft political maneuvering is all about being a smart opportunist.

Shiv Sena giving a tough time to BJP is a compulsion. The party would be wiped out if it follows coalition dharma — whatever that actually means.

BJP's rise has come at the cost of the regional party. When BJP entered Maharashtra in the early 1990s, the sphere of its influence was limited to 10-odd seats in the 288-seat Assembly. Late Pramod Mahajan, a key strategist of the BJP, succeeded in convincing Sena supremo Bal Thackeray that a deal between the two parties was beneficial for both. It played second fiddle to Shiv Sena for over 20 years until 2014. The BJP has eroded Shiv Sena's support base to the point that now, even educated middle-class Marathis, a core base of the latter, vote for the former. Pramod Mahajan was instrumental in forging the alliance between Shiv Sena and BJP. (Photo: Twitter)

As the BJP emerged as the most credible face of Hindutva on the pan-India stage, in Maharashtra, Shiv Sena had to pay a price for it. The BJP then also appropriated the legacy of Maratha warrior Shivaji, leaving the Shiv Sena disarmed.

Nothing wrong in BJP having done that. This is how politics is.

Shiv Sena is BJP's oldest ally. Most others have left the party, of course, after seeing their political fortunes sink. The reason why Shiv Sena still stays relevant is because it has held on to its nerve even in negotiating with the BJP.

BJP has shown an amazing propensity to enter states with allies and then expanding its base. The mushrooming of Rashtriya Swayamsevak Sangh (RSS) shakhas in states where BJP enters helps firm up the support base for the party. In the long run, this, in turn, helps the BJP grow.

As to the question of numbers, when has BJP ever cared about numbers?

In the 2017 Manipur polls, the Congress had won 28 seats in the 60-member House and the BJP 21. The BJP joined hands with regional parties to claim support of majority of MLAs and Governor Najma Heptulla invited it to form the government, ignoring the claim of the Congress.

The Goa election, which was held along with Manipur's, also threw up a hung Assembly with the Congress winning 17 of the total 40 seats while the BJP bagged 13. Again the BJP beat its rival in cobbling up a majority with post-poll allies and its leader Manohar Parrikar was sworn in as the chief minister by governor Mridula Sinha.

The BJP, now, throwing the logic of numbers at the Shiv Sena is an instance of wilful forgetting due to political expediency.

The BJP's fortunes maybe on the rise, but this has been achieved only because it has carried in its belly a hunger to succeed. It is legitimate for other parties too to be driven by the same hunger. Shiv Sena is no exception.

Post your comment
#Assemblypolls, #Maharashtra, #BJP, #Shivsena
The views and opinions expressed in this article are those of the authors and do not necessarily reflect the official policy or position of DailyO.in or the India Today Group. The writers are solely responsible for any claims arising out of the contents of this article.