Don’t write off Shivraj Singh Chouhan just yet. Here’s how he is scripting his comeback

Sources close to Chouhan say he fancies himself in Atal Bihari Vajpayee's mould.

He may have lost the chief minister’s chair and his party may have lost Madhya Pradesh after governing the state for 15 long years — but it would be too early to write off Shivraj Singh Chouhan just yet.

Attention needs to be paid to how he is carving out a niche for himself slowly and steadily. Why we can't forget this man: Shivraj Singh Chouhan is apparently working behind the scenes to carve a new niche for himself. (Source: Twitter)

While the spotlight has shifted to Congress leader and MP’s new chief minister Kamal Nath for the moment, 59-year-old Chouhan is making some deft moves behind the scenes.

On the intervening night of December 11-12, Chouhan made no attempt to garner the numbers to stake a claim to form the government, even as the battle between the BJP and the Congress proved to be a see-saw for political supremacy, with the BJP and Congress taking turns to lead the numbers game much through the day.

At one point, a restless minister reportedly asked Chouhan if they should head to Raj Bhavan in order to pre-empt the Congress’ bid to form the government. Chouhan nodded his head in approval — but made it clear that he would be meeting governor Anandiben Patel to tender his resignation, rather than dig in his heels. Shivraj Singh chose to gracefully hand over his resignation to governor Anandiben Patel, instead of trying to form a government. (Source: PTI)

For the worldly-wise minister, this was surprising as the BJP had staked claim in somewhat similar circumstances in Goa, where the party made up for its numerical weakness by poaching from the Congress stable.

In Manipur too, the BJP acted swiftly and decisively to outwit the Congress. Even in the Rajya Sabha polls, where the numbers game is almost settled, the BJP under Narendra Modi and Amit Shah has almost made it a habit to cover the opponent’s turf.

Sources close to Chouhan say he fancies himself in the Atal Bihari Vajpayee mould, and accords importance to issues of parliamentary propriety, convention and public perceptions. 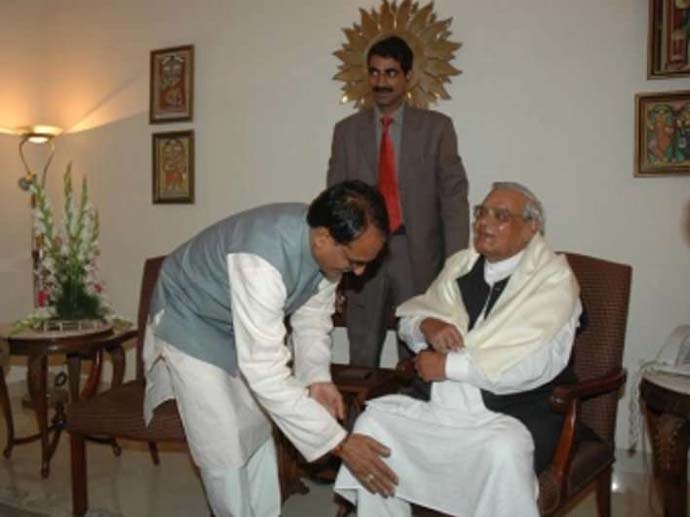 Those close to Shivraj Singh Chouhan say he is trying to fit into Atal Bihari Vajpayee's mould. (Source: India Today)

During Kamal Nath’s swearing-in ceremony, Chouhan shared the stage with the key players of the potential Mahagathbandhan. Chouhan was invited in his capacity as the outgoing chief minister. But the MLA from Budhni did the unthinkable. He was photographed holding his raised hands with Jyotiraditya Scindia on one side and Kamal Nath on the other.

There was no trace of bitterness. This photograph was in sharp contrast to another (missed) photo opportunity in Parliament where Prime Minister Narendra Modi, BJP national president Amit Shah and Congress president Rahul Gandhi were present together within listening distance of each other. There was no exchange of greetings, words or even smiles between Rahul and the two BJP leaders.

Post-defeat, in both private and public pronouncements, Chouhan has made it clear that he is unwilling to move out of his home state.

Chouhan said he would prefer to serve as leader of the Opposition in Madhya Pradesh. A section of the BJP’s central leadership is apparently wary of Chouhan’s decision.

According to them, a three-time chief minister should not stay in a state Assembly, particularly after tasting defeat. There are very few precedents (Prem Kumar Dhumal in Himachal did that) among national parties where a defeated chief minister was made leader of the Opposition in the state Assembly.

The buzz in Madhya Pradesh's BJP circles is that Chouhan’s streak of independence indicates his desire to chalk his own course of action and position himself in Vajpayee’s mould — a leader who is democratic and civil – and has the ability to carry everyone along.

It may be recalled that in mid-2013, LK Advani had told a gathering of BJP leaders in Gwalior that he considered Chouhan at par with Modi, who was chief minister of Gujarat then. 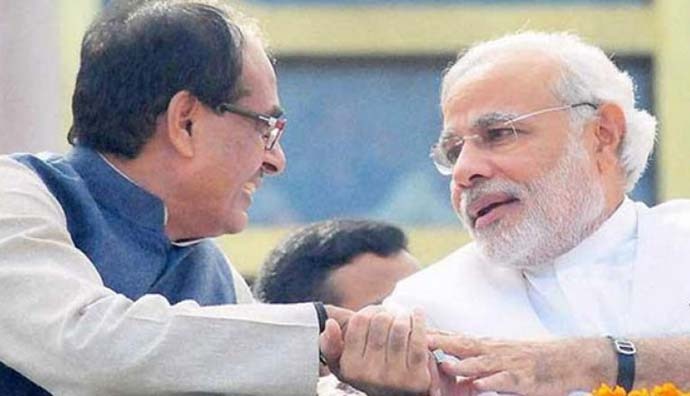 Advani had gone on to say that Chouhan’s task of accelerating development in a ‘backward state’ like Madhya Pradesh was more daunting. The comparison had drawn eyebrows within the BJP as Advani’s words had come just a few months before Modi was officially named the party’s prime ministerial candidate for May 2014's Lok Sabha polls.

Chouhan says he doesn’t fancy himself in any particular role — but his supporters think destiny and circumstances may help him stage a comeback.

#Atal Bihari Vajpayee, #Kamal Nath, #Madhya Pradesh Assembly elections, #Shivraj Singh Chouhan
The views and opinions expressed in this article are those of the authors and do not necessarily reflect the official policy or position of DailyO.in or the India Today Group. The writers are solely responsible for any claims arising out of the contents of this article.