Silver lining: The one way Indian Muslims have benefited under right-wing rule

I am not a blind supporter of all that many Indian Muslims do.

I have always strongly believed that no minorities should be oppressed, and that a hallmark of a civilised society is that minorities therein can live with dignity and honour.

It is for this reason that I have always condemned atrocities, oppression or discrimination against Muslims. When I was a judge in the Allahabad High Court, a petition came before me (Mohd Sharif Saifi, writ petition 43403 of 1998 decided on 28.1.1999) filed by some Muslims who had a grievance that they were apparently not being allowed to construct a mosque on their own land by the authorities, and because of that, Muslims in UP cities had often to offer their Friday namaz in open public places like roadsides. The right to pray can't be denied. (Photo: Reuters)

At that time, there was a BJP government both in the Centre as well as in UP. Despite that, I ordered that since we have a secular Constitution and freedom of religion is guaranteed by Article 25, Muslims in UP had a right to construct mosques on their land, and no permission from the authorities was needed for this.

In another case, I ordered that Muslims had a right to take out Muharram processions (though of course the authorities could regulate it, so that there was no inconvenience to the public). When a petition was filed before me seeking a ban on buffalo slaughter during Eid ul Zoha as it allegedly hurt Hindu sentiments, I dismissed it, saying there was no law against buffalo slaughter (as there is against cow slaughter). It is important for a secular society to give respect to all faiths. (Photo: Reuters)

When I was Chief Justice of the Madras High Court, I ruled (in Mohd Gani vs Supdt of Police, writ petition 5202 of 1998 decided on 14.7.2005) that Muslims have a right to take out funeral processions, and the fact that there was a Hindu temple on the path was no valid ground to prohibit them.

Whenever there were atrocities against Muslims I raised my voice, the latest being lynchings by alleged gau rakshaks.

There were two reasons for my belief.

Firstly, I strongly believe in secularism. Although I am an atheist, and regard all religions as superstitions, I am also a strong supporter of religious freedom (provided it is not taken to extremes).

Secondly, since India is a country of great diversity, as it is broadly a country of immigrants (see my article 'What is India' online and on my blog Satyam Bruyat), the only way to hold it together and take it forward is by giving equal respect to all communities. This was the policy ('suleh-e-kul') of the great Emperor Akbar, whom I regard as the real Father of the Indian Nation. Akbar was the architect of Suleh-Kul, a bedrock of Indian culture. (Photo: Wikipedia)

Nevertheless, I am not a blind supporter of all that many Indian Muslims do.

For instance, I have repeatedly called for abolition of sharia law. Sharia was a law made in 7th century Arabia — how can it apply in the 21st century? Law reflects social relations in society, and when society changes, the law too must change. Can we apply Manusmriti, made 2000 years ago, today?

I also objected to the statement of a Supreme Court judge who said that the Gita should be made compulsory in all schools. In a country professing to be secular, how can a book perceived to be religious be forced on non-Hindus?

The coming to power of the BJP govt in the Centre with absolute majority in the Lok Sabha in 2014 has instilled a sense of insecurity among Muslims. This is due to hate speeches, ghar wapasi rhetoric, lynchings, etc. But out of bad things, sometimes good things also come out.

Unfortunately, before the BJP came to power, the so-called secular political parties were often catering to Muslim vote banks, and these vote banks were often controlled by reactionary feudal-minded Muslim clerics, who took advantage of their hold on the Muslim masses. The result was that a large section of Muslims were kept backward and poor by most of these clerics. So, as long as these 'secular' political parties were in power, the plight of most Muslims could not improve.

The coming to power of the BJP in the Centre, particularly from 2014, changed all that.

Due to aggressive communal politics, and the denial of any political space to Muslims (the BJP did not give a single ticket in Lok Sabha  or many state Assembly elections to Muslims), Muslims are now gradually realising the danger of isolationism — and how their clerics and some Muslim political leaders had kept them backward for their own benefit as they had a vested interest in doing so. So, while the BJP rule has terrified many Muslims, it has also benefited Muslims in the sense that they are now gradually realising the evils of the hold of clerics and some Muslim political leaders on them, and of remaining with a feudal mindset. This will be beneficial to Muslims.

At one time, before the BJP came to power, Muslim clerics and some Muslim leaders were behaving like king-makers, thinking that no government could be formed without their support. They would issue fatwas, insist on retaining laws like triple talaq, nikah halala, etc. They compelled Prime Minister Rajiv Gandhi to legislatively nullify the progressive and humanitarian Shah Bano judgment of the Supreme Court, granting maintenance to divorced Muslim wives. The Shah Bano judgment was positive and progressive. It was also nullified. (Photo: Twitter)

Now we don't hear much of that. The clerics, and most Muslim political leaders who treated Muslims as sheep are these days largely silent.

The Pakistan Prime Minister, Imran Khan, reportedly said recently that the treatment of Muslims in India shows that Partition in 1947 was justified. The truth is just the contrary. It is Partition, on the basis of the bogus two-nation theory, which has largely contributed to the plight of minorities in India and Pakistan today. 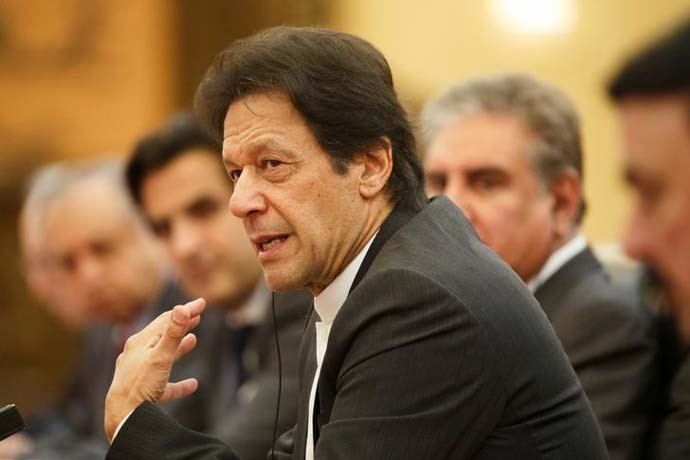 No, Mr Khan. Partition was not the effect. It was the cause. (Photo: Reuters)

Muslims in India have realised this.

I am sure many Muslims in Pakistan have also done so — though they may not be able to say so openly.