Last 'lal salaam' to Somnath Babu, who remained a Communist all his life

I met the veteran MP for the first time in 2004, but he had been part of dinner table conversations all my life.

Born to lawyer parents, my familiarity with the name “Somnath Chatterjee” began at the age of five or six. Often over breakfast or at dinner, “Somnath Da” would find a mention — his legal points, a joke he had made, sprinkling some spice on an otherwise bland menu.

As a child, I understood the legal innuendos little, but could make out that the man was extremely funny, with a crackling sense of humour.

As I grew up, I realised that my parents and “Somnath Da” had parted ways, politically. He and his jokes were discussed less often now. Somnath Chaterjee had to leave the CPI(M) in 2008.

But one day, suddenly, he popped up again. My father had met him on a flight, and from what I understood, “Somnath da” embraced him like a lost younger brother and chided him for not keeping in touch, thawing all the ice.

It was much much later that I got to know Somnath Chatterjee in my professional capacity. He was a veteran MP and I, as a cub reporter, was covering his constituency prior to the 2004 election.

I had anticipated meeting someone funny, like the “Somenath jethu (uncle)” of my dining table, but instead, I saw a tall, towering personality with a baritone, leaving me momentarily speechless.

Even after talking to him at length, I could not muster the courage to tell him about my parents and how he was a household name for me.

Chatterjee insisted that I go around his constituency — Bolpur — and write the piece after talking to people, his voters, instead of gathering information from him or from the district party office. Such was the confidence of the man that he knew his voters would not differ much from him. This was not because of fear or the command and clout he wielded, but out of love and respect for the man, who knew his voters by name, by their pleasure and pain.

The last time I met him was in 2017. He was not keeping well and had become immobile, but his brain was sharp as ever. I asked for an interview and he readily agreed.

It was a little after 4 pm. With trepidation, I entered the living room, where Somnath Chatterjee and his wife Renu were sitting side by side, having just finished their evening cup of tea. Ordering tea and snacks for us, Somnath Babu sat down for the interview. He was ready to talk for hours, but shooting him was strictly prohibited.

Even as we (our photographer and I) wondered what could be the reason behind this, Chatterjee pointed to his grey stubble, grown unruly over his face. He had had a few days of flu and illness, and did not think he was looking all too well to be photographed.

“I can’t do (shave) it myself. A barbar comes to help me,” he said. He needed help for wearing his favourite attire too — a dhoti-punjabi.

Somnath Babu promised us a photograph, but only when he felt up to it. That day came after a fortnight, and he was dressed like a typical Bengali bhadrolok — in a starched white punjabi and dhoti, clean-shaven with that broad ear-to-ear smile. Not only did he dress up for the occasion, he also took the trouble of coming down to his chamber after several months, to pose in his famous library with the books behind him.

After the shoot, he wanted to see his pictures in the camera, and made sure that we gave him a copy of the interview once it came up.

The interview, unlike his usual ones, was full of anecdotes and personal touches — his pain, his hurt, remorse, misgivings, and expectations from life.

Time and again, he reiterated that he was a Communist and would remain so till he breathed his last.

When asked about his last wish, his reply was prompt — to be wrapped in the red party flag on his last journey.

He knew this wish would never be fulfilled — only a party member has the right to be honoured with the red party flag after death. But with a childlike simplicity, Somnath Babu had blurted out his one last wish. 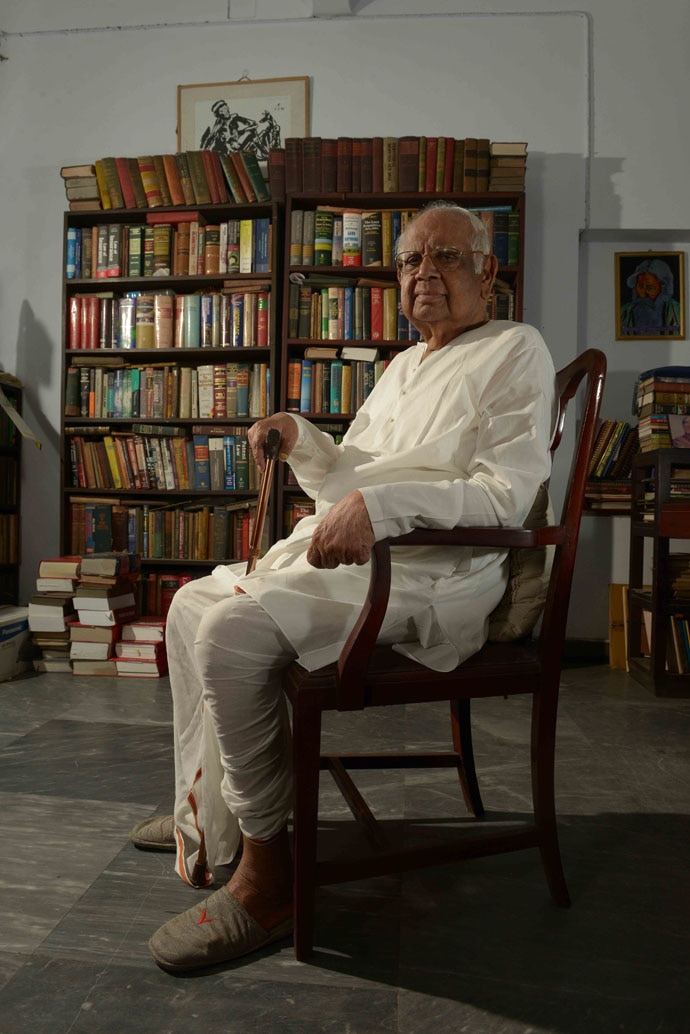 Somnath Babu agreed for a picture, and even dressed up for the occasion. (Photo: Subir Haldar)

When, in 2015, talks of “gharwapsi” in the CPI(M) were in the air and party leaders wanted him to back, Somnath Babu refused, not out of a grudge, but because he felt there was no question of going back — he had always been a Communist, heart and soul, and would always remain so. Requests from Sitaram Yechuri were politely turned down — he said there was no question of appealing for membership, since he did not leave the party on his own.

The towering personality of Communist politics had been forced to leave the CPI(M) in July 2008, following differences with the party over carrying out what he believed were his constitutional obligations and responsibilities as the Lok Sabha Speaker.

“It was the saddest day of my life,” he said. It was like losing a part of himself, a limb, a lobe of the brain, which he could not come to terms with till he breathed his last.

Somnath Babu never stopped believing in the Communist ideology, his heart crying out for the poor, the homeless, the injured and the maimed in the tug of war that is politics.

In April, he came down heavily on the ruling Trinamool Congress for turning the biggest festival of democracy — panchayat elections — into a gory blood bath.

I remember him saying that such anarchy was pushing the state towards a situation where demands for President’s Rule would become inevitable. While someone else making such a statement might not have been taken seriously, such words coming from Somnath Chatterjee got even the ruling party thinking.

As Somnath babu makes his last journey, sans the red flag, the mourners on ground, irrespective of party colours, will hold their fists tight and give him the laal salaam — the honour truly befitting the Communist icon of Bengal.

Post your comment
#Bengal, #Lok sabha speaker, #CPI(M), #Somnath chatterjee
The views and opinions expressed in this article are those of the authors and do not necessarily reflect the official policy or position of DailyO.in or the India Today Group. The writers are solely responsible for any claims arising out of the contents of this article.