Don't be fooled, Somnath temple history is distraction from reality

"If there was no Sardar Patel, the temple in Somnath would never have been possible. Today some people are remembering Somanth, I have to ask them - have you forgotten your history? Your family member, our first prime minister, was not happy with the idea of a temple being built there." So said Prime Minister Narendra Modi yesterday (November 29) at an election rally in Prachi, Gujarat, while referring to Congress vice-president Rahul Gandhi.

In an era where history has become a tool of political manipulation, he is both right and wrong.

Yes, Jawaharlal Nehru did oppose the reconstruction of the ancient Somnath temple on grounds that it was embarrassing for a modern, secular nation; it is also true that however much BJP tries to appropriate Vallabhbhai Patel, India's first home minister was a staunch Congressman who banned the Rashtriya Swayamsevak Sangh (RSS) in connection with Mahatma Gandhi's assassination.

In fact, the other Congressman deeply involved in the mythification of Somnath temple - according to tradition, the Shivalinga in Somnath is one of the 12 jyotirlingas in India, where Shiva is believed to have appeared as a fiery column of light - KM Munshi, was also a Congressman, though one with a chequered history. Munshi started the Akhand Hindustan Movement and along with Chakravarti Rajagopalachari founded the Swatantra Party, which was right-wing in its politics, pro-business, pro-free market economy and private property rights. Later, Munshi joined the Jan Sangh. The recalling of Somnath at this point in India's history when the Ayodhya dispute is still simmering and when a film on Padmavati can cause a near riot is significant. As the new song by the brilliant satirical group Aisi Taisi Democracy puts it: "Hum history se khelenge".

Playing with history has become our favourite national pastime. Maharana Pratap lost the Battle of Haldighati to Akbar? No problem. Change it. Rani Padmini of Chittor may or may not have existed? Never mind. A poem written 200 years ago extols her virtues, so check, she's real enough to call for a ban on a film based on the poem. LK Advani first reintroduced Somnath into BJP reality by beginning the Rath Yatra from there, and he is now forgotten? No problem again.

The odd thing is that the neo-nationalists don't realise they are following the historical trope established for them by another invader, the British -the "evil Islamic invader" versus the brave Hindu native.

Richard Davies, professor of religion at Bard College, New York, has written extensively on Somnath and argues "that the stories of destruction of Somnath are often parts of what Aziz Ahmad called 'epics of conquest' that do not necessarily have any relation to real events. Reading them as history is a serious error that colonial and Hindu nationalist authors have often indulged in. We cannot answer the question of how often Somnath was destroyed, or how many Hindu temples were destroyed, because the narratives of destruction are hyperbolic and somewhat fictive. I can see the linkage between Padmavati and Somnath, but there should not be a direct historical link. There was a British historiography that stressed this narrative, and it has been maintained by Hindu nationalists.'' 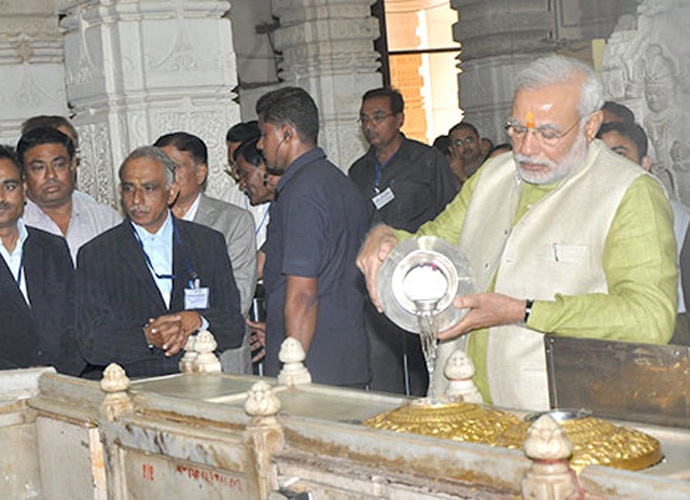 On Somnath, Davies gives a lot of credit or discredit to Munshi and says his novel Jaya Somnath (1937) was a key thing in promoting Somnath as a sign of Hindu/national restoration. The rebuilding plan of the immediate post-independence period was supported by Patel, and opposed by Nehru who was concerned that government interference in construction of a big Hindu temple would contradict the image of India as a modern secular nation-state that he wished to project (Nehru's letters to Patel, the Jam Saheb, and others opposing this project, Nehru, Selected Works, volume 16, pp 603-612).

In a note to me, Davies says: "There was also a matter of collecting consecration waters by Indian diplomats from around the world that embarrassed Nehru. The issue of integration of Junagadh princely state into India (the nawab, a Muslim, threatened to go with Pakistan) was certainly part of the political stakes for Patel, in his support of rebuilding a Hindu temple at Somnath. He wanted to signal the Hinduness of the princely state. The BJP and VHP consciously linked Somnath and Ayodhya in the Rath Yatra of 1990. They began the yatra in Somnath, and part of their rhetoric was to use the successful rebuilding of Somnath to support the parallel (they hoped) restoration of Ram Janmabhoomi.'' Davies quotes himself, writing in 1997: "With Munshi's use of Somanatha both as a symbol of nationhood and an assertion of Hindu majority power in Gujarat, we come full circle to the rhetoric of the Hindu nationalists of the 1990s. Hindu nationalist rhetoric, like Munshi's historical fiction, takes religious sites like Somanatha and the Ayodhya site they call 'Rama's birthplace' as constant and eternal foci of Hindu devotion. Recalling instances of alleged destruction of these sacred shrines, Hindu nationalists evoke a schematised, Manichean historical vision of ancient harmony, foreign invasion and disruption, and brave indigenous resistance eventually overcoming the invaders to restore order. Like Munshi, they claim that the restoration of a long-abandoned temple site is essential to the integrity of Hindu society, and have mobilised toward this end. Evoking Munshi's successful project, the BJP has portrayed its mobilisation to build a Rama temple atop the site of the Babri Masjid as a 'continuation of the spirit of Somanatha'."

The fact that it was two Congressmen who were critical in this scheme, or the special circumstances of Junagadh's contentious accession to India that was one of the reasons behind Patel's supporting it, or indeed that Nehru's objection to it was less evidence that he was a bad Hindu and more that he was a good nationalist, is lost on the prime minister and his party who are only too content to let the nation squabble over mythical princesses and ancient conquests. History as distraction from current economics. Ah, fake facts in the face of current reality? What could be better?

Also read: India doesn't stand to gain from Pakistan's shifting equations with US and China