State of the States: The leaders in the fight against Covid-19

India Today Editor-in-Chief Aroon Purie talks about the newly introduced category — ‘leader in the fight against Covid-19’ — in the 19th State of the States study, in the December 7, 2020 edition of the India Today Magazine.

Among the images we have come to live with as 2020’s new normal are those of Prime Minister Narendra Modi holding video conferences with the chief ministers of all states. These webinars have discussed everything, from the imposition of the lockdown to its easing, and, more recently, critical questions like the distribution of vaccines. India’s cooperative federalism is a given but rarely has it been so visibly and reassuringly seen in public as it was this year.

It is against this changed landscape that we commissioned our 19th State of the States (SOTS) study. The Covid-19 pandemic, now in its 11th month, has wreaked unprecedented havoc. With 9.2 million cases and 1,34,699 deaths, India is the second-most affected country globally after the US, even though mortality rates are low and recovery rates high. So far, however, its biggest casualty has been the economy, now amid a recession. The IMF forecasts that India’s GDP will contract by 10.3 per cent this year even though the RBI is hopeful that growth will return in the ongoing third quarter of 2020-21. An economic slump means lower tax revenues to spend on social schemes and the disruption of Centre-state tax-sharing agreements such as the GST. The lockdown and containment measures have impacted the states’ revenues even as they incur higher expenditure to manage the health crisis and restore economic growth. 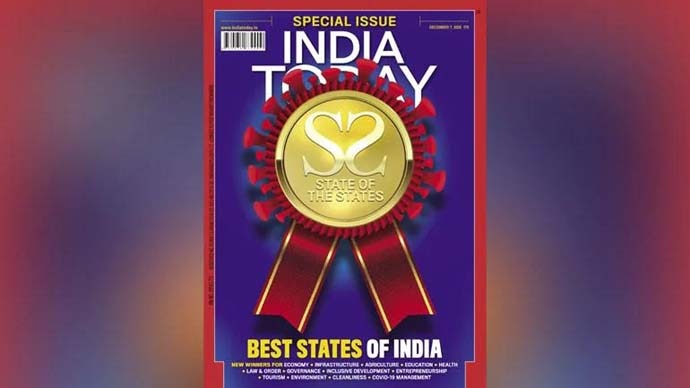 An RBI report released on October 26 calls this surge in expenditure and collapse in revenue a ‘scissor effect’. States that presented their budgets before the Covid-19 outbreak, the RBI report says, projected their fiscal deficit at 2.4 per cent of GSDP. The average for budgets presented post-lockdown is 4.6 per cent, beyond the 4 per cent baseline. This presages a serious financial crisis in the states. They are projected to spend more on education, water supply and sanitation, rural and urban development, and curtail expenditure on energy and transport.

As India battles the virus, its states will take the lead in the country’s post-pandemic recovery. This will be the true test of competitive federalism. States will have to outdo each other in economic development and social welfare.

For nearly two decades, the India Today SOTS study has served as a report card on the performance of India’s states. Over the years, it has evolved in scope and methodology and become the most comprehensive and credible benchmark for assessing the socio-economic standing of a state.

This being a pandemic year, the annual India Today-MDRA SOTS study assumes added significance, to help policymakers and stakeholders identify the potential and the pitfalls of every state.

Three years after we changed the parameters of our study to make it more inclusive, there have been a few interesting trends. Tamil Nadu has emerged as the best-performing state among the big states for three consecutive years, while Assam has retained that honour in the most improved category. In the small states, too, Goa has been the best performing state overall for three years in a row.

This year, our newly introduced category, ‘leader in the fight against Covid-19’, takes note of the fact that states are on the front line against the pandemic. This one-time ranking assesses their performance and preparedness in combating the spread of the virus and reducing fatalities. We evaluated their tests per million, positivity rate, recovery rate, mortality rate, population density, total available isolation beds, hospitals for Covid-19 patients relative to population and contribution to their disaster management fund. As we navigate these troubled times, India Today SOTS study aims to be the beacon and platform for recording the fascinating growth story of India’s states. For, the country can prosper only when its states prosper, and each one pulls its weight.

#India today magazine, #Covid-19, #India today sots study, #Stateofthestates
The views and opinions expressed in this article are those of the authors and do not necessarily reflect the official policy or position of DailyO.in or the India Today Group. The writers are solely responsible for any claims arising out of the contents of this article.