Stop this dog fight and listen to Swamiji. Menstruation starts with men

Swamiji Krushnaswarup Dasji's words have outraged the liberals who think girls of menstruating age menstruate and refuse to acknowledge that the word menstruation begins with men, who decide what women can touch and when.

"A woman who prepares food during the menstruation period will be reborn as kutri (dog)." — Swami Krushnaswarup Dasji, Swaminarayan Mandir, Bhuj, Gujarat, India.

Finally, with these wise words, the swamiji has cleared the clouds over cooking while on periods. The wisdom is also in how he marries together side-effects and after-effects. The side-effect of cooking during periods show up as after-effects.

His followers run a school to save school girls from being reborn as doggos. Recently 68 girls of the Sahajanand Girls Institute were paraded to the restroom and forced to remove their undergarments to check who among them was menstruating and living a normal girl's life.

Women, in their cycle, are supposed to lead an ascetic life for those 3-4 days. In the basement, eat what they are provided and touch nothing but the essentials. This is how they are taught about good touch and bad touch.

But this outraged the liberals who think girls of menstruating age menstruate and refuse to acknowledge that the word menstruation begins with men, who decide what women can touch and when.

This is happening because the liberals have feelings and thoughts. Swamiji knows this and hence he says: "You can feel whatever you want but these rules have been outlined in the shastras."

You can argue that shastras were written in an age when human beings did not know much about how these bodily functions occurred. You can argue that most of the shastras are misogynistic by nature but do remember that men are not absolved either.

"If a man eats food prepared by a woman in her periods, even once, he will be reborn as an ox," Swamiji said in his sermon on periods. Hence, before you get married, learn how to cook, he added. 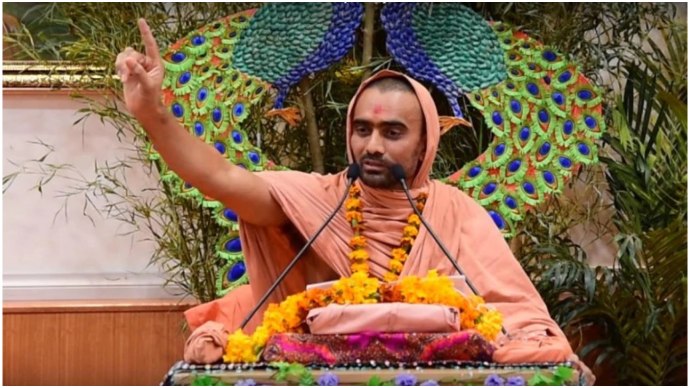 Now you see! Men, even when reborn in punishment, are born as something that is worshipped. While dogs are impure and despised in spite of their loyalty.

Since in India, one doesn't question religious beliefs, we cannot question the Swamiji. Because if you start questioning religious beliefs about the afterlife, there is no stopping. Religions stand on this foundation called "Death". All rewards and punishments come after you die. Islam and other Abrahamic religions grant heaven and hell. Hinduism and fellow Indic faiths grant rebirth as both reward and punishment. It depends on the species you are reborn into. If you question the Swamiji like a godless heathen, you can't question one and give a free pass to others. If you question all, well, you are godless heathen, aren't you?

Liberals will say these are illogical beliefs and nothing happens when you die. But nobody has lived to prove that. So you have to take the Swamiji's word for it.

Now imagine the Swamiji driving along with bhajans playing at full blast in his car stereo and a bull chasing a dog runs on to the road. For you it's a bull, for Swamiji this man once ate a roti that was rolled by a woman on her periods. Poor fellow had no idea about the triya charitra. "The bitch didn't even tell him," he thinks. Pardon the word here because the woman ate one herself and was reborn into that kutri that the bull was chasing on the road.

The car hits the bull. The bitch has escaped. It's an ox. Farmers in nearby fields don't know it's an ox. They set the car on fire and beat the swami into a pulp. This is India. Period.