No, we are not The Other: #TalkToAMuslim is no soft appeal. It is a clear statement of belonging

'Muslims' are being made the only 'political issue' in India and marginalised.

#TalkToAMuslim trended at #1 on Twitter late into last night, with over 500 Twitter users participating in the hashtag and over 50 lakh impressions. The trend was perhaps triggered off by actor Mohammed Zeeshan Ayyub’s tweet where, in response to a Zee News headlines, he expressed ‘I am a Muslim. I also happen to be a human like you. You can talk to me. #TalkToAMuslim’.

This was specific to the dehumanisation of Muslims in the media done by a majority of news channels now, urging people to personally take up conversations with Muslims, instead of relying on the narrative set forth in the national discourse.

I am a Muslim. I also happen to be a human like you. You can talk to me. :)#TalkToAMuslim https://t.co/pVEpbGks4t

This was then picked up by other actors like Swara Bhasker and Gauhar Khan, setting off a Twitter trend that lasted well into the morning today. What started as a specific response to the incessant political browbeating over Rahul Gandhi meeting a few Muslims soon started being contextualised by users to best reflect their own agitations. To be, or not to be, a 'Muslim party'? Rahul Gandhi seems to struggle with the BJP's sharp barb. (Photo: PTI/File)

Last week was witness to a new low in Indian politics where a mis-reported and apparently fake quote of “Congress is a Muslim party” was given prime-time legitimisation and further debate when picked up as a slogan by important BJP leaders, including our Prime Minister. This, following all the various ‘Muslim issues’ being repeatedly dragged to death everyday to divert attention from the real pressing issues that plague the country’s development.

Right...Wonder if u condemned the PM,Def Min et al for making it sound like an abomination that Rahul Gandhi met Muslims.Did any of u say "so what if he met them" didn't u guys go to the Shahi Imam of Jama Masjid for "Sampark for Samarthan"?I maybe stupid but I'm not a hypocrite https://t.co/OHXbo9ntKA

This hashtag was perhaps a push-back at the culture of impunity in making everything around Muslims the only subject worth talking of and often using fake news to give rise to topics for debates, parading paid, beard/topi-sporting maulanas day in and day out.

Even young kids in schools have moved on from using 'Baghdadi' or 'Osama' while bullying their Muslim classmates — the new cuss word is ‘mullah’.

As one tweet said: ‘Yes, talking to a Muslim can be a stigma if we go by the perception and political culture created by the BJP. #Talk to a Muslim.’

In this battle of perceptions, everyone has their own way of expressing outrage. Also, perhaps a way to counter the invisibility of Indian Muslims, apart from the stereotypes pushed into our faces and fast eroding our identities for all except one — the other. If you think that Muslims aren't feeling persecuted. If you think Muslims aren't fed up of being the national conversation every night at 9 PM bulletins. If you think Muslims don't feel otherised, demonised and marginalised, then you need to talk to them to understand them.

As another Twitteruser suggested, perhaps 'Understand a Muslim' would have been a more literal interpretation of the hashtag.

There are physical ghettos, but there is a mental ghetto as well.We wilfully blind ourselves to the "others'" life.Far from sight, far from mind, as they say.And what does that lead to ?Further strengthening of the prejudice.And our TV and media isn't helping.

As with any public outrage, this too had its fair share of people who expressed disapproval.

Many Twitter users found the hashtag patronising, condescending and further fuelling divisiveness. Validating the 'us vs them' narrative. Others found the trend to be in poor taste — presenting Muslims as specimens and purporting it was a favour to Muslims to talk to them.

Completely flaggerbasted by the #TalkToAMuslim hashtag. It imbues TALKING to muslims with a stigma that never was, and is patronizing as heck. I'd imagine people with friends of different religions including Islam are quite taken aback by this and unsure what it attempts to fix.

I guess there are two ways of looking at this.

One, where we see this as feeding into otherisation. Second, where we believe that the process of otherisation is already complete, as evidenced by the way all headlines are designed and agendas set. Also, look at any of the comments and responses to the hashtag.

Overwhelmingly, it bought into these narratives.

If this feels like it's limited to social media and television, then look at how easy it has become to suspect — and lynch — a Muslim. 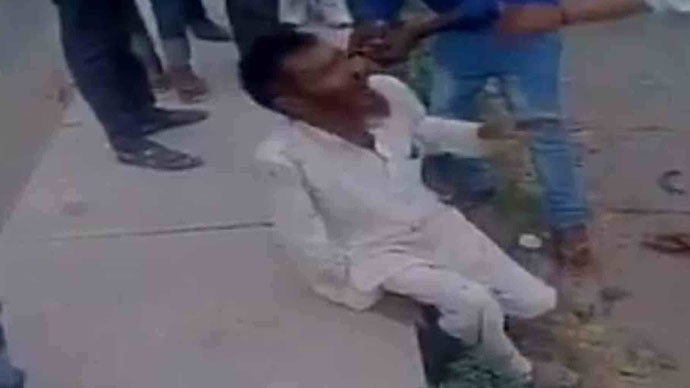 It's very real: If you feel the hatred is limited to TV and social media, remember Pehlu Khan, lynched for transporting cattle. (Photo: Twitter)

Tune into the conversations happening in your house, in your kid's classroom, in neighbourhood playgrounds. The 'us vs them' narrative needs no further validation. It’s the cornerstone of politics in India today. Who are we fooling?

We are already specimens on display every night on your television screens.

The otherisation of Muslims is already complete.

Our demonisation is what we are fighting.

#TalkToAMuslim was not an appeal. Rather, it was a statement. It was not about seeking acceptance from the majority. It was about rejecting the hate and smear propaganda that will form the backbone of all campaigns in the run-up to the next national election. Also, as in any free-for-all, unorganised, spontaneous outpouring, one cannot expect everyone to be on the same page with equal sensibilities. A few stray comments that might not reflect the spirit of the trend need to be overlooked. Of course all Muslims are humans.

#TalkToAMuslim was just another manifestation of Karwan-e-mohabbat, interfaith iftaars or the Visit a Mosque initiative. It might not be as positive in its construct though, and yes, I agree, it makes dystopia so very real.  But to say that the people of India know better and are not buying into the narrative that’s divisive is an unsubstantiated claim.

One that will be clear only after the next national election. Who's buying the hate campaigns? Only the 2019 General Election will show. (Photo: PTI/File)

Till then, we live in hope.