Why does Lalu prefer Tejashwi Yadav over Tej Pratap in RJD?

All is not well in the Rashtriya Janata Dal (RJD) camp in Bihar. A party which RJD leader and former Bihar Chief Minister Lalu Prasad Yadav built with so dedication is now beginning to see cracks. A glaring example of this was seen at the National Executive party meeting in Bihar on February 10, 2022.

It was touted to be the event where RJD Chief Lalu Prasad Yadav was to formally hand over the reins of party to younger son Tejashwi Yadav, Leader of Opposition in the Bihar Assembly. Lalu, after being in jail in the fodder scam case for the past three-and-a-half years, is left with frail health. The leader himself finds the responsibility too heavy on his shoulders.

It is also said that Lalu wanted to transfer the power before judgment in the final case in the Rs 139-crore Dorandra fodder scam case in Jharkhand, which is due on February 15. But to his amazement, the event made headlines because of his elder son who played spoilsport. The elder son, Tej Pratap Yadav, came with his father and looked calm and composed. As his brother Tejashwi took the stage, Tej Pratap stood up angrily and left. Even at the event, Lalu’s daughter Misa Bharti and Tejashwi Yadav sat with him, while Tej Pratap sat at a distance with Abdulbari Siddiqui. Reprtedly, Lalu, along with all party workers, were quite shocked.

To the ones in the know of Bihar politics, the differences between Tej Pratap and Tejashwi wouldn't sound new. The two have been at loggerheads over issues of handling of the party in the absence of Lalu. While it is said that Lalu is keen on having his younger son, Tejashwi, as the next party chief, his daughter Misa Bharti and elder son Tej Pratap Yadav have had their reservations over this.

Why is Tej Pratap neglected by father Lalu?

Tej Pratap Yadav is the elder son of RJD Chief Lalu Prasad Yadav, the former Chief Minister of Bihar. Tej Pratap is the sitting MLA from the Hasanpur constituency of the Bihar Assembly. He was also the Cabinet Minister of Health from 2015-2017 when Nitish Kumar led an alliance with RJD.

However, despite being the elder son of the family, Tej Pratap has not been able to dominate the party like his younger brother Tejashwi Yadav has. Tejashwi is the MLA from Raghopur constituency. From making brash statements to being outspoken on several issues in the party, Tej Pratap has earned the ire of his father Lalu Prasad Yadav and his own partymen. Though Tej Pratap and Tejashwi have never publicly acknowledged any feud between them, but there has been news of not all being well among them.

In the past, Tej Pratap has made comments or undertaken actions which have led to the embarrassment of the party and Tejashwi. For example, in March 2019, Tej Pratap resigned as the head of RJD Youth Wing as his close aides were denied Lok Sabha tickets from Jehanabad and Seohar. The grand alliance in Bihar was led by Tejashwi Yadav in the 2019 Lok Sabha election.

The RJD leaders felt the role of Rabri’s brother Anirudh Yadav alias Sadhu Yadav behind the ruckus. The leaders who spoke to The Print in 2019 had said that Sadhu was heavily influencing Tej Pratap and wanted to revive his own political career through Pratap.

Lalu Yadav had distanced himself from Sadhu after 2009 and the latter never found his glory in politics after that. Sadhu also openly backed Tej Pratap over his divorce petition with wife Aishwarya, whereas Lalu and Rabri wanted reconciliation.

Even in August 2021, the differences between Tej Pratap and Tejahswi cropped up when Tejashwi removed the party’s student unit head, Akash Yadav, who was a close aide of Tej Pratap. Pratap openly expressed his frustration over this.

Tej Pratap had also locked horns with state party chief Jagadanand Singh, Chief of RJD Bihar unit, whom he accused of running the party Hitler-style. An agitated Singh stopped going to the Party Chief office. Tejashwi later convinced Singh to continue his services in the party.

Since Lalu came out on bail in April 2021, he was witness to all of this. Lalu reportedly was upset with Tej Pratap over his conduct in the matters pertaining to party affairs. To his close people, he had made clear of making Tejashwi the next head of party over his elder son. 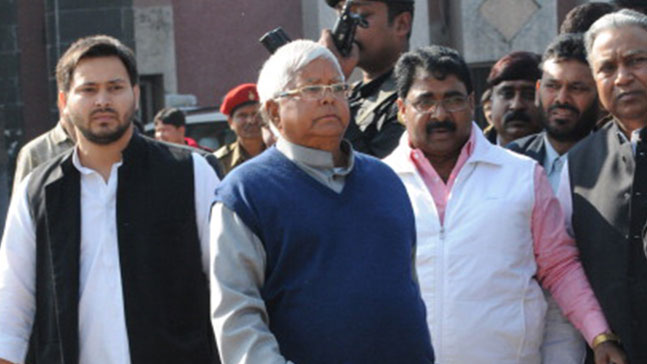 Lalu made his frustration with Tej Pratap clear back in October 2021 when he visited Patna but refused to visit Tej Pratap's house. Tej Pratap tried his best to convince his father. When it was clear to him that Lalu won’t visit him, he sat on a dharna outside his residence. Lalu did go, but refused to get out of his car. An obstinate Tej Pratap washed his father’s feet but Lalu, far from being convinced, left without entering Tej Pratap’s house.

Lalu’s disappointment with Tej Pratap is much because of his conduct in public life and personal life. Even when Lalu was in jail in 2019, he had once sent a sermon to Tej Pratap when the latter was threatening to hold a press conference after his differences with the RJD unit. Lalu had then requested Tej Pratap not to talk to the media at any cost.

Apart from a not-so-great public life, Tej Pratap’s personal life too couldn’t see any sunshine. He filed for a divorce petition within five months of his marriage with Aishwarya Rai, the daughter of former RJD MLA Chandrika Rai and granddaughter of Daroga Prasad Rai (former CM of Bihar).

Tej Pratap's wife Aishwarya accused him of being a drug addict who would dress like Hindu Gods and Goddesses, the The Hindu reported. Aishwarya also said that she had complained about this to mother-in-law Rabri Devi and sister-in-law Misa Bharti, and that they had assured her that it wouldn't happen again. But her differences with Tej Pratap grew heavily in the later months. In November 2018, Tej Pratap filed for divorce in a family court.

At present, Aishwarya stays with her mother-in-law Rabri Devi at her 10, Circular Road house in Patna.